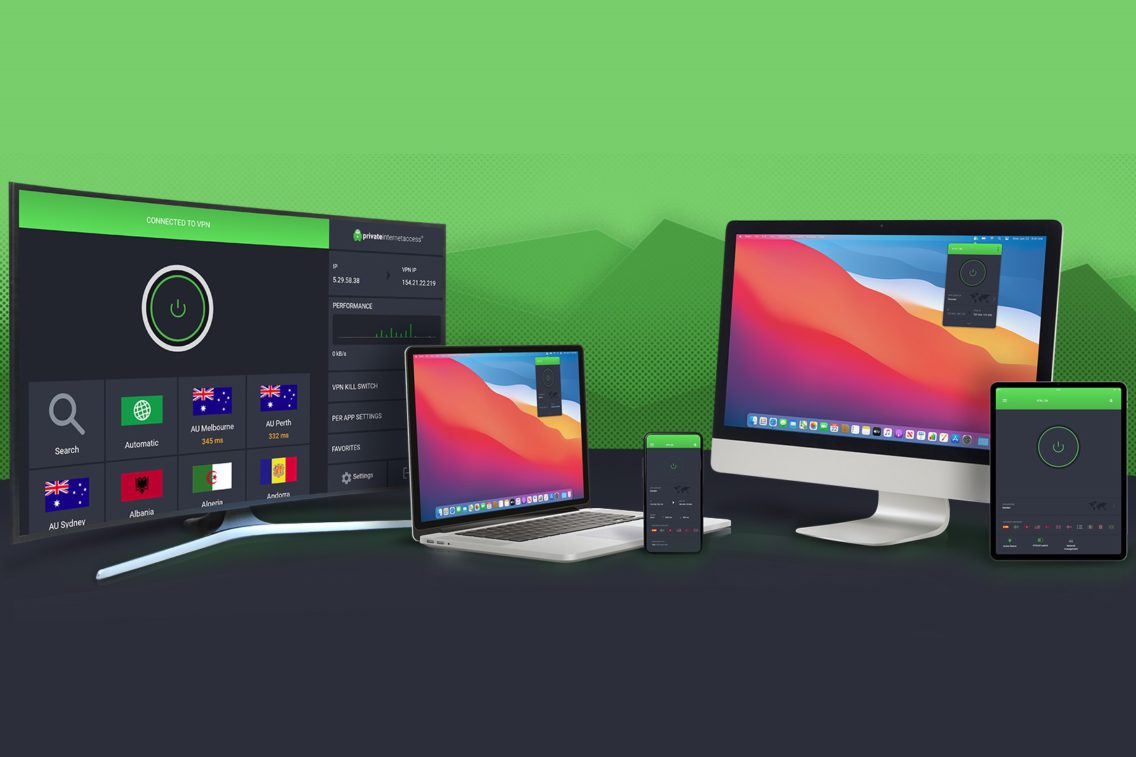 People keep asking me about this ‘VPN’ thing. As readers know, I have been using Private Internet Access (PIA) flawlessly since 2015 and respond that PIA is the best VPN for Australia. So, I decided to formalise the recommendation by revisiting VPNs, their need and why I say Private Internet Access is the best VPN for Australia.

What is a Virtual Private Network (VPN)?

It is an app that runs on a computing device – Windows, Mac, Android, iOS, a router and more. It disguises your public IP address and encrypts your web traffic. In other words, without a VPN, anyone can find who you are, where you are, and what you are doing. ‘Anyone’ means your Internet Service Provider, NBN, Telco carrier, intelligence agency, a hacker or a man-in-the-middle attack.

You may not think that you have any secrets worth protecting, but what about internet banking and online ordering? A VPN protects that.

A VPN can disguise your IP address to look like it is coming from another country. That gets over geo-blocking, where you cannot see a foreign website because it automatically redirects to the Australian site. Or, if you want, access the far wider US Netflix catalogue. And finally, safety. When you use public Wi-Fi or even home Wi-Fi, hackers can intercept signals and snoop on you. VPNs prevent that.

If you did not know, a huge number of free VPNs are nothing but spyware or data harvesters and originate from guess where – China! Like anti-virus/malware protection, VPNs are apps that you really need to know the pedigree and the policies behind them.

And I have real issues with some paid VPNs, especially those that bolt on to a security suite that imposes a raft of restrictions like no access to torrents, pitifully small data limits, and logs. A good paid VPN does not impose such arbitrary limits.

Surging consumer demand for free VPN services is being met by opportunistic developers, who are taking advantage of both the lack of consumer understanding of the product and minimal app store oversight to cash in. We are seeing apps that have been slapped together as a vehicle for aggressive advertising using third-party libraries that are not appropriate for use in a privacy application.

UK-based and publicly listed Kape Technologies bought US-based PIA in December 2019. Its mission is “To ensure that every individual has a private sphere, a digital room of one’s own, bringing control back to individuals in an age where privacy is controlled by a privileged few.”

It owns CyberGhost and ZenMate VPNs and some developing digital security assets. It plans to use its VPNs as the basis of a suite of enhanced online privacy products. Its 2020 Annual report is here.

At present, there are three PIA Australian points-of-presence (POP). These service all of Australia. PIA monitors use and can expand the capacity as required. A legitimate question is why not have POPs all over the country? The answer is that distance to a POP only affects ping/latency times. For example, Voice-over-IP (all calls over NBN) is acceptable to about 150-200ms (thousandth of a second). Gamers want <100ms, but there is not much point in using a VPN for gameplay.

Ping times from Greater Sydney (South Coast to Central Coast and west to the Blue Mountains) range from 4 to 30ms. From Brisbane, it ranges between 30-40ms and from Cairns 40-50ms. Similarly, Perth handles WA traffic, and Melbourne handles SA, NT and VIC traffic. All these are well within limits and are more a function of your NBN carriage service provider and network efficiency (e.g., number of hops to get to the PIA POP).

Note that its nearest competitor has approx. 200 servers in Australia (versus 3153) and will not divulge its data capacity.

If you have good internet, your speeds will be very similar. What you will notice is that speeds are all very close with and without PIA. International speeds are dependent on global pipe congestion and bandwidth.

Speedtest with PIA – a negligible difference

VPN tech – Why PIA is faster?

PIA uses the latest WireGuard connection technology with superior encryption and is faster than the IPsec and OpenVPN used by many VPN providers. It works just as well on IoT devices, smartphones, and high-end PCs.

You can also select which apps use or don’t use the VPN called a ‘split tunnel‘. For example, gamers may want to shave off a few milliseconds, and there is not a lot of point in putting Netflix or Spotify via a VPN.

Another nice feature is PIA MACE that blocks domains used for ads, trackers and malware serving. Effectively it speeds internet access up and protects the device by stripping the rubbish out.

And remote workers can get a dedicated IP address (extra cost) which allows a work server to link to your VPN directly.

Yes, and they should be mandatory. Only countries like China and Russia ban them as they want to monitor their citizens’ web activity.

But what you do with a VPNs anonymity may be illegal. For example, downloading pirate movies or accessing illegal content. Catch 22 is that your traffic is anonymous, and no logs link the originating IP with the VPN IP.

Do you need different VPNs?

PIA, at last count, had 33,600 servers in 77 countries, so it is perfect for travellers, especially as it has smartphone and tablet apps. And by using PIA, your travel location is anonymised.

Business means business-grade reliability and security, and as long as NBN is working, PIA is working. The ability to get a dedicated IP address means you can set up a secure link to remote workers.

Consumers will complain that it costs money, but would you rather have a less secure free VPN that monetises your data? Would you like the free VPN to know what sites you visit, perhaps using the VPN to get into your system etc.?

VPN on a router

Running a VPN on a router counts as one device and protects the whole network. Let’s just say that it can be done, but Mesh and combo modem/routers can require some set-up expertise. You need to know things like DNS, split tunnelling, IP addresses and more. PIA is happy to open a support ticket to help. One thing to note is that when using a router, you need to select the OpenVPN protocol. Most of the routers from ASUS, D-Link and Netgear are fine. You can read more here.

Private Internet Access is the best VPN for Australia. I have been using it for six years – no issues. It has kept up with the traffic requirements and has remarkable capacity and speed in Australia. I am impressed with the ping speeds and negligible reductions in download speeds.

But best of all, it is idiot-proof. Install the app, enter your username and password and this it. And from $4 per month, it is affordable. PIA has a special offer for GadgetGuy readers here. Easy.

Note: GadgetGuy is a 100% independent review site and does not accept affiliate or click-through commissions nor sell anything. All reviews are on real-life use and reflect our assessment of the product. Independent Trustpilot Australia gives PIA a 4.2/5 rating based on nearly 7000 user reviews.