One of the world’s thinnest notebooks has received an update, bringing the MacBook Air in line with the rest of Apple’s computers and throwing in a new high-performance processor, backlit keys and the latest version of Mac OS X.

Designed to be thin and easy to carry, the MacBook Air has long been considered one of the lightest full-size notebooks. Even with a large 13 inch screen, spacious keyboard, and fast processor, Apple manages to bring the Air to 1.35kg, a weight that’s barely noticeable in hand luggage compared to the 2 or 3 kilo 13 inch notebook you’re used to carrying.

Aesthetically, Apple has retained the previous design of the MacBook Air, but with an aluminium casing that doesn’t look as ‘soft’ in profile. The angles seem to rake steeply and, in general, the Air can look a bit like a sharp piece of metal that could be wielded as a weapon. It’s not, of course, and the edges of the chassis are, in fact, gently chamfered, making the notebook easy to grip and pull from your laptop bag without hurting yourself.

You’ll find the same black chiclet keyboard with nicely spaced-out buttons, as well as the huge 5 inch glass trackpad that acts as a giant select and scroll button. Backlit keys have returned, however, something that was seen on the original MacBook Air but removed from last year’s model.

The screen is LED backlit, providing a bright and colourful 1440 x 900 native resolution on the 13 inch model. If you drop down to the less expensive 11 inch, your screen becomes a touch smaller, with the resolution also dropping to 1366 x 768. In either case, the camera at the top of the screen has been upgraded to a FaceTime HD camera, capable of 720p video.

Inside the new Air, you’ll find a second-generation Intel Core i5 processor, but those with deeper pockets can choose the faster Core i7. Hard drives have been abandoned by Apple for the Air range, with solid state drives taking over and providing enhanced battery life. Buyers can look forward to at least 128GB in the 13 inch MacBook Air, with a 256GB model available. Memory is pretty standard too, with 4GB available in all models except in the entry-level 11 inch model, where 2GB is provided.

Ports are now fairly standard on the Air, with Apple providing two USB 2.0, a 3.5mm headphone jack, SD card slot (not present on the 11 inch), a MagSafe charging port and a Thunderbolt connection.

The new Air also arrives with Mac OS X Lion, the latest version of the Apple operating system. As such, the keyboard on the Air has been changed to complement some of the new features found on the OS, including function keys for both Launchpad – the new application menu borrowed from iOS design – and Mission Control, a new task manager.

Outside of these features, Bluetooth 4.0 has been introduced, WiFi is now 802.11a/b/g/n, and the graphics is powered by Intel’s own HD3000 chip.

Our test sample was the top-end 13 inch model, providing an Intel Core i5, 256GB storage space, and 4GB memory. 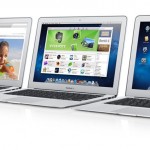 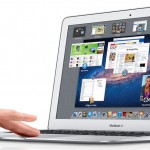 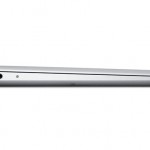 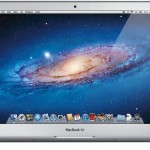 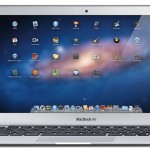 Launchpad is the MC Hammer of Lion: you can’t touch it. 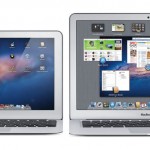 Much like other Apple computers we’ve reviewed, it’s hard to fault this notebook. After playing with it for just a few minutes, it’s clear the MacBook Air has been designed and engineered to impress, which it does.

Apple has nailed the look of the Air, and while it doesn’t sports the ‘executive black’ suggestive of a notebook with serious business cred (like Lenovo’s X1), professionals and creatives alike should find the silver aluminium finish pleasing to the eye and excellent in the hand.

The MacBook staples – a beautifully spaced out keyboard and huge multitrack glass touchpad – enable an excellent user experience, whether surfing the web, writing a document, or editing video. The return of a backlit keyboard makes the Air even more useful at night or in low-light environments, with two keys on the keyboard allowing you to change the brightness easily.

Speaking of brightness, the 13 inch LED backlit screen is exactly that, exhibiting strong colours with when viewed head on (although it’s not, to our eyes, as good as the iPad’s screen). Colours tend to wash-out at off-axis vertical viewing angles, however, a characteristic we’ve noticed previously in the polycarbonate white MacBook that has now been retired.

Despite being only a dual-core CPU, the 1.7GHz Intel Core i5 still manages to get work done, able to handle video editing over iMovie, sound applications such as GarageBand, and processor intensive photographic applications. We’re not saying that this is the best machine to do your Photoshop work on, but outside of the storage limitations, the MacBook Air can handle most of what you’re likely to throw at it. And for an ultra-thin computer, that’s impressive.

So is there anything not to like about the new Air?

While there’s not much to grumble about on the hardware side, Mac OS X Lion is another matter. The scrolling action, for instance, reverses convention, requiring you to motion upwards on the trackpad to move the page down. Apple’s new application menu system – Launchpad – presents icons in a manner very similar to the way applications on the iPad’s home screen. iPad users will want to touch the screen to select and flick through apps, but of course the Air is not a touchscreen. If you’re one of these, you really will have to restrain (and retrain) yourself from poking at the screen with your fingers.

Launchpad is the MC Hammer of Lion: you can't touch it.

While annoying, there are easy workarounds for these niggles: the mouse scrolling can be reset to reflect the conventional action, and you can choose not to use Launchpad.

Battery life, however, is a little down on expectations, with our review sample achieving slightly more than five hours of general web surfing and applications use, as well as some audio and video editing in iMovie and GarageBand. That’s better than some of the recent ultra-light notebooks we’ve reviewed, but not up to Apple’s “up to 7 hours” of life.

Light, compact and powerful – these are the triumvirate features for portable computing today and the Air satisfies them all. Whether you install Windows under Boot Camp or Parallels to avoid some of Lion’s quirkier features, or stick with the new Mac OS X, the 2011 MacBook Air is a superbly finessed piece of hardware.