The next model in the Asus Transformer series features modest updates to what was one of the best Android tablets when it was released, bringing a better screen and faster chip to an already excellent design.

What is essentially the fourth Asus Android tablet to feature the screen latch-and-detach Transformer design, the EeePad Transformer Infinity is an update to the Prime tablet that brought – and delivered – so much promise.

Specs and build are, as a result, very similar between these two machines, with the main differences stemming from the screen, the processor inside, and the price tag when you find it on store shelves.

Like most Android tablets, and certainly every Transformer released by Asus thus far, the Infinity features a 10.1 inch screen protected by Corning’s Gorilla Glass, now in its second generation of the strengthened coating.

The new panel housed in that 10.1 inch display is one of the bigger deals in this machine, with Asus grabbing a 1920×1200 resolution, slightly higher than that of Full HD and running on the 16:10 aspect ratio (compared with Full HD’s 16:9).

Technology-wise, you’ll see Super IPS+ used in this screen, which should offer near perfect viewing angles from every direction, with solid colour and contrast from roughly 178 degrees on either side, at least until you can’t see the screen.

As it has been with the other Transformer models, all of the technology is found in the display section, with the keyboard dock housing an extra battery, expansion ports, a small touchpad mouse, and physical keyboard.

The Infinity is considered a premium tablet, so the Australian model arrives with 64GB of storage standard, though you’ll find a little over 55GB for you to actually use and consume.

Little has changed on the camera front, with an 8 megapixel rear camera with F/2.2 aperture and 1080p Full HD video capture, as well as a two megapixel camera on the front which should cater for 720p video conferencing.

Plug ports exist with a microHDMI and 3.5mm headset jack on the screen section, with the proprietary Asus charge and data port on the bottom that connects to the keyboard dock. This can be charged directly from the wallplug too, mind you, as the keyboard dock features the same proprietary plug port for charging the dock and tablet at the same time.

It hasn’t even been a year since Asus let us play with the Asus EeePad Transformer Prime, one of the better Android tablets we had ever seen.

With the new Infinity model, not much has changed. The speed has been upped slightly and the screen has been improved to a higher than 1080p display, but outside of these updates, it’s very much the same product.

The main improvements for the Infinity, however, are the performance and display, but only one of these is really noticeable.

Over in the display department, the 1920×1200 screen used on the Transformer Infinity is excellent, with clear text and images.

You can actually use the Infinity in direct sunlight... but you probably won't.

With the use of a Super IPS+ display in the Infinity, you can even take the tablet out into sunlight, with the very bright panel allowing you to work outdoors, making a nice change from other tablets out there. There’s still a bit of reflectivity at work, and we could certainly see ourselves in the glossy display, but providing you turn the brightness all the way up, you could work in sunlight without any major dilemmas on this Infinity.

While the screen is clear, looking at it doesn’t have the same obvious “wow” effect as we had with the Retina screen on the new iPad, but it’s still clearer than other Android tablets.

Much like with the Prime, the keyboard is pretty good. The keys are a little shallow, as expected on such a thin keyboard, but overall, it’s a decent typing experience with no letters missed in our typing test.

In fact, this review was written on the Infinity, and we had very few problems, which is a better result than last year’s Asus ZenBook Ultrabook, one of the machines the Infinity draws some design inspiration from.

The feeling of the machine is still pretty high grade, with a solid brushed aluminium enclosure and Corning’s Gorilla Glass 2 protecting the 10.1 inch Full HD screen.

By itself, the screen and tablet section has a light weight to it, with a metal finish that manages to be less slippery than the one found on Apple’s iPad. Once connected with the keyboard dock section, the machine carries much more heft, closer to a netbook and laptop than that of a tablet.

Battery life is pretty similar to past models, with the combination of battery in the tablet’s screen section and recharging battery in the dock providing roughly 10 to 12 hours, though you could probably reach the Asus expected time of 14 hours with WiFi switched off.

Don't want to bring the dock on holiday? You can charge the tablet directly.

Overall, the updates have made the Prime an even better machine, several months after the release of that product. But while Asus has updated some things, not every upgrade has boosted the machine to levels of awesomeness.

Benchmarking shows the new high-speed 1.6GHz Nvidia Tegra 3 to be sometimes as powerful as the Transformer Prime TF201, and sometimes just a little slower, in fact.

From what we’re told, the higher resolution of the screen can stop the chip from performing at the fastest speed possible, with a result that brings it closer to what Asus released several months ago, rather than the top tiered tablet the Infinity is claimed to be.

Push the switch to detach the tablet section from the keyboard dock.

That’s not to say the Asus Transformer Infinity is slow, as that’s simply not the case, but it’s not the powerhouse Asus is claiming from it.

We did have some slow downs here and there when we were jumping between menus, taking screen shots,and even waiting for the web browser to let us scroll down webpages, but the performance wasn’t bad at all.

Android’s latest and greatest operating system is also missed out here, with Asus sticking with the still excellent and reasonably up-to-date version 4.0, also known as Ice Cream Sandwich. The latest OS, 4.1 or “Jelly Bean” should be along any time now, but as of publishing, was nowhere to be found.

There’s also no 3G module on offer in the Transformer Infinity, at least not yet, and so it technically competes with the 64GB WiFi iPad, a tablet that carries a $759 charge in Australia. When you see the Infinity’s price, it’s a little bit of a shocker, with a $999 asking price for the tablet and keyboard dock.

At that price, you’re barely getting an improvement on the TF201 with it’s $899 recommended retail price from earlier in the year, a value that has dropped slightly and can now be found for between $600 and $800 on street pricing. With that in mind, that means you’re being asked to fork out an extra $200 for a screen that doesn’t make as significant a difference as you’d like to think.

Furthermore, with Ultrabooks available for under this and touch-enabled Ultrabooks on the way in the coming months, a $999 hybrid-tablet is a bit of a hard ask.

That's the Infinity there in the third position, not quite as fast as the Transformer Prime just above it and the HTC One X in the first position.

In making modest updates to the Transformer Prime, Asus has come up with a decent refresh, even if the price doesn’t necessarily make it the easy purchase that the Prime was before the new iPad came out.

If you’re in the market for a tablet with strong keyboard and battery, the Transformer Infinity is worth your attention, though keep in mind that there are a lot of products coming in the next couple of months, and that may not make this as strong a purchase. 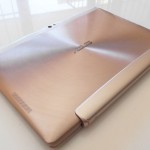 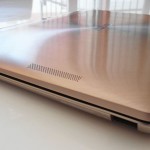 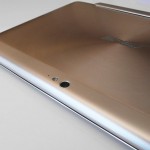 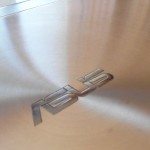 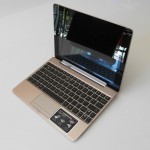 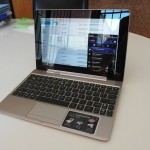 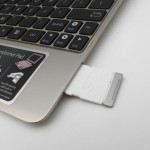 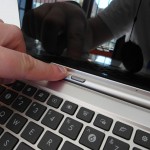 Push the switch to detach the tablet section from the keyboard dock. 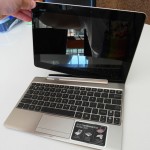 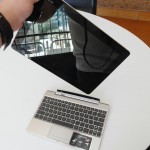 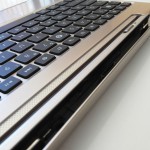 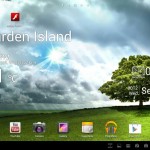 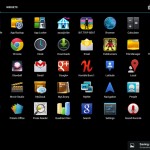 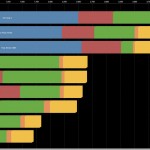 That’s the Infinity there in the third position, not quite as fast as the Transformer Prime just above it and the HTC One X in the first position. 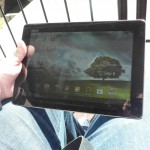 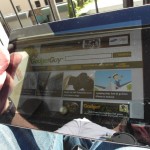 You can actually use the Infinity in direct sunlight… but you probably won’t. 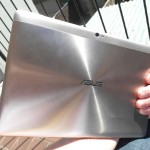 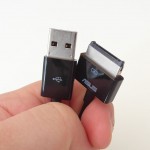 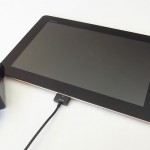 Don’t want to bring the dock on holiday? You can charge the tablet directly. 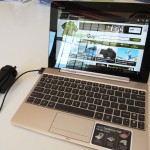