Asus has won us over with its Transformer design of tablets in the past, turning a tablet into a netbook with a 10.1 inch touchscreen slate connecting to a keyboard dock with built-in battery. The third version of the model takes the same formula but cuts back on the premium technology, coming out with something better for people on a budget.

The Asus Transformer Pad TF300T takes what was essentially a previous generation of Transformer – the Prime – and cuts it down for the budget market, ditching the aluminium shell used in ZenBook design and replacing it with the cheaper plastic used in many a notebook.

This material switch leaves you with a product that, while thicker than the prior Transformer, is only marginally thicker than the most recent iPad (9.9mm compared with the New iPad’s 9.4mm) and slightly lighter at 635 grams.

Specs are near identical with the previous generation of Transformer, which is hardly surprising given it was released only a few months ago in February. As such, you’ll find a quad-core Nvidia Tegra 3 processor clocked at 1.3GHz driving this tablet, as well as 1GB RAM, up to 32GB storage built-in storage, Bluetooth, WiFi 802.11 b/g/n, and GPS.

Out of the box, you’ll find Google’s latest version of Android – 4.0, also known as “Ice Cream Sandwich” – with very few modifications from Asus.

The screen in this model is a 10.1 inch multi-touchscreen, but unlike the Prime, it’s just a regular IPS screen, instead of the super bright SuperIPS+ screen used in that premium model.

A 3.5mm headphone port for microphone and headphones can be found on the far right side of the tablet while a mini HDMI port is on the left side just above a microSD slot.

A keyboard dock is also present in this model, although it can be purchased without this accessory. The dock arrives with a built-in battery, touchpad mouse, USB slot, and SD card slot.

Powering the Transformer Pad is the proprietary connection Asus has been using since the first Transformer (TF101) rolled out last year, with a port on both the very bottom of the tablet section and on the left side of the keyboard dock accessory.

While the new Asus Transformer Pad TF300T is very much a new model, the details shared with its more premium metal TF200 Prime brother make it perform almost exactly the same.

The Nvidia Tegra 3 takes a slight cut in speed, dropping from 1.3 to 1.2GHz, a hundred megahertz drop that’s unlikely to inconvenience anyone, even the most die hard of performance nuts.  We certainly didn’t notice any major performance issue, and had no issues playing any games taking advantage of the Tegra 3 chip inside, nor did we find any noticeable slowdowns with applications, browsing the web, or switching between homescreens.

Storage options are also similar to the previous model, with the TF300T offering either 16 or 32GB versions, with both sections of the Transformer supporting upgrades to storage. The tablet section features a microSD slot for boosting capacity on the touchscreen, while the keyboard dock’s SD slot offers both a convenient way to upgrade memory quickly and on the cheap, while also allowing you to look at photos you’ve shot on most digital cameras without a problem. If your camera doesn’t take an SD card, we’re pretty sure you can plug it in over the one USB port found on the keyboard dock.

The 10.1 inch screen is close on the two models, too, with the Pad sporting a regular In-Plane Switching (IPS) LCD panel similar to what Apple’s iPad uses, albeit with a 1280×800 resolution. Unlike the Prime, however, the TF300 uses a regular IPS panel, different to the SuperIPS+ on the Prime.

The difference between these two technologies can be seen mostly in the brightness. Both seem to offer excellent colour reproduction in the viewing angles, although like most tablets, the TF300 doesn’t have the best usability in direct sunlight, probably because the screen doesn’t have the same insane brightness that helped the Prime out in this way. We spent most of our reviewing time inside with the tablet, and you probably will too.

Multimedia and connectivity is also close to bang on between the models, with the TF300T featuring an 8 megapixel rear camera (on the tablet) with reasonably low f/2.2 aperture, front-facing 1.2 megapixel camera, Bluetooth with A2DP, WiFi 802.11 b/g/n, and GPS. Even the keyboard dock is close to identical, with the only differences being the build material and the smaller battery inside for extending the life of the tablet.

The benchmarked performance of the Asus Transformer Pad TF300T is just under that of the Transformer Prime TF201, and strangely, both are under the HTC One X mobile handset. Unsurprisingly, all three are very fast devices.

However, there are some differences, and the plastic chassis is one of them, offering a cheaper build than the metal designs used in the Transformer range up to now. In the hands, it’s clear that Asus has made some budget cuts with the TF300T, but it is by no means awkward.

In fact, the slightly textured back of the plastic tablet section gives your fingers something to hold onto, while the smooth plastic keyboard dock feels no different to many of the Windows laptops we’ve reviewed.

Our battery performed quite well, too, managing to keep its charge over the three day period we spent constant time with the unit. We surfed the web, played some games, typed this review (seriously), and still had plenty of battery left, suggesting that if the tablet is paired with its keyboard dock, you should be able to manage between 10 and 13 hours with the dock, and around 8 to 9 without. If you use the tablet even less, expect a decent several day standby time.

So if the Transformer Pad TF300T is almost identical to its superb Transformer Prime brother, has Asus come up with an amazing budget version of that tablet?

The answer is both yes and no.

While the specs of this Transformer certainly put it in a good place to be that perfect compromise, there are some design issues that stop it from being totally amazing.

One of these is the keyboard, believe it or not. While the dock is an excellent way of adding a physical keyboard to the package – one complete with an extra battery, USB port, touchpad mouse, and SD card slot –the typing experience is marred by being just a touch too soft. We didn’t have anywhere near the number of problems in typing as we did on the Asus ZenBook, but you’ll want to type with firm presses, as the keyboard just doesn’t appear to be as strong as the previous Transformer models.

You can opt to not use the keyboard – especially if the tablet isn’t docked – and you’ll find both a virtual on-screen keyboard as well as a finger-tracing typing system, similar to Swype.

It sure looks like a laptop when the tablet and keyboard dock are connected.

Also lacking in strength is the hinge for the tablet connection, as with a sudden jerk, you’ll find the hinge pushes back quickly. This tells us that any turbulence mid-flight or sudden breaking on a bus will cause the the tablet screen to move. Thankfully, the tablet is locked in place, making it impossible for the anything to go flying off in a different direction.

An issue left over from the prior model is the lack of strong rubberised feet to stop the tablet from slipping. It’s not a huge issue in the tablet section – you’ll be holding that – but when the keyboard dock is connected, the rubber feet  on the bottom of the dock don’t actually make contact with a desk, still propped up by the hinge. Here on the TF300T, the plastic body isn’t quite as slippery as the metal Prime, but don’t expect the rubber feet to help out when the tablet and keyboard are connected.

The screen is also very glossy, so glossy that you notice reflections very easily. In the Prime, this was easy to get around, thanks to the uber bright SuperIPS+ screen. With only the regular IPS screen in the TF300T, you’re pretty much in the same boat as other tablets, so it’s not a huge issue unless you’re taking it out to the beach or the park.

While the plastic chassis is by no means as impressive as the metal one offered in the Prime, the Asus Transformer Pad does offer a reasonably impressive budget tablet experience for not much more than the cost of other tablets.

It’s worth noting that Android’s biggest problem at the moment stems from the lack of productivity apps available on the platform, but if you can get around that and want a tablet with strong battery life and an experience closer to that of a notebook, the Asus Transformer Pad TF300T is an easy bet. 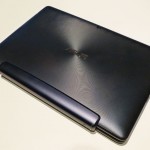 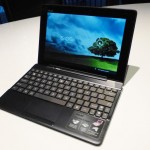 It sure looks like a laptop when the tablet and keyboard dock are connected. 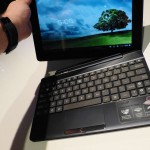 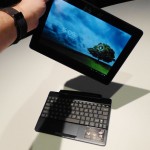 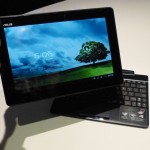 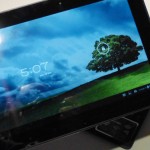 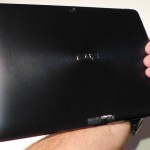 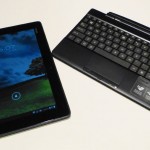 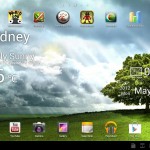 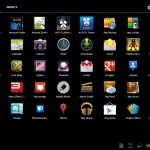 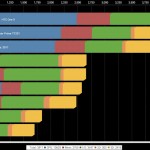 The benchmarked performance of the Asus Transformer Pad TF300T is just under that of the Transformer Prime TF201, and strangely, both are under the HTC One X mobile handset. Unsurprisingly, all three are very fast devices.