While every manufacturer under the sun is trying to come up with a way to solve the laptop or tablet dilemma for customers, Asus is turning to a design that has made it very famous over the last couple of years.

Designed from the same concept that Asus has been using for its Transformer computers, the VivoTab is a hybrid tablet that runs Windows instead of the Android it chooses to use on the Transformer series of machines.

Under the hood, the techonlogy is very familiar, with Asus opting for the Intel Atom chips we’re seeing on other 10 to 11 inch Windows 8 machines, the Z2760 clocked at 1.8GHz. This runs with a 2GB supply of RAM, while the storage is set to 64GB and can be boosted over the microSD slot.

This isn’t a 10 inch machine, though, and Asus has equipped this machine with an 11.6 inch Super IPS+ screen running the HD capable 1366×768 resolution, with several points of simultaneous touch. Corning’s scratch-resistant Gorilla Glass protects the display from any falls or sharp fingernail action, too.

Connectivity is about standard here, with WiFi 802.11 b/g/n, Bluetooth 4.0, and Near-Field Communication, while ports are the typical microHDMI and 3.5mm headset jack on the tablet section, with two full-size USB 2.0 ports on the dock.

Both the dock and the tablet section feature an Asus proprietary charge connector, though when the tablet is connected to the dock, the only charge point is on the dock itself.

There’s also a camera on this tablet, with an 8 megapixel backside illuminated module on the back, while the front features a 2 megapixel capable of grabbing HD images of you in a video conference.

A Wacom digitiser stylus has also been included in the box, making it possible for you to rely on a sharper method of interaction, and offering something close to a mouse, with buttons on-board.

Also included is a converter that can turn an unused Asus proprietary power port into a spare USB port, potentially offering three USBs available at once.

A Windows logo sits on the front at the bottom of the screen, and acts as a touch button to activate the new Start screen.

Asus is practically the pioneer of the tablet-hybrid machine, with the first samples of this concept coming from the Asus Transformer TF101, a tablet that not only kept all of its innards inside the slate section, but also threw in a keyboard, mouse, ports, and extra battery in a docking section.

It’s like having a laptop when you’re not having a laptop, partnering the tablet with a proper wired keyboard that you can use on the plane (Bluetooth keyboards for the iPad and other tablets can’t be used in airplane mode), while recharging your battery in the process.

Here in the VivoTab 810, Asus has made a machine that looks like the next generation of Transformer products, but instead of using Android, Asus has gone with Windows 8, Microsoft’s desktop operating system that not only features support for touch through it’s neato grid-based Start screen, but also supports older applications circa Windows 7, Vista, and back to XP through the Desktop mode.

Making this possible is a processor we’re seeing pop up in quite a few of the Windows 8 tablets doing the rounds, and that’s the Intel Atom Z2760, a capable chip that brings with it two cores running at 1.8GHz, working alongside 2GB RAM and 64GB built-in storage.

Specs like these remind us of the VivoTab from Asus, and these devices are very similar, even if the screen is different, with the one in the 810 sitting at 11.6 inches, while the Smart is only 10.1.

Both, however, feature the same HD-ready 1366×768 resolution, so it’s a little like looking at the same screen with the same specs in the slate, so to speak.

There were too many “s” words there in a row for us, so the next part of the review will deal with something that lets go of that letter, and that’s performance.

Overall, this isn’t a killer machine, and reminds us of a netbook in the way it runs. While Windows 8 doesn’t exactly chew through the resources, the technology on-board still isn’t up to the same standard that you might find in either a 13 or 15 inch Ultrabook, with Intel Core i5 and i7 processors in those bad boys.

Like the VivoTab Smart and the Acer Iconia W510, you’ll be able to run a few apps at once, but the moment you start opening all those tabs and trying to push graphics, video editing, and gaming to new heights in a portable way, your laptop will begin to hate you.

Back to an “s” word, the screen is lovely, and feels like it comes from the same build as some of the ones we’ve seen in Android Transformer models, with great viewing angles, while still being very, very bright.

The VivoTab 810 has a nice screen with multiple touch points.

Aesthetically, Asus has tried to stick with the metal look it brought in its Zen design, though because it’s obviously not cut from the same block of aluminium, is mixing it up with some plastic too. This combination of materials makes a design that stays looking professional and is easy to grip, while having two tones to admire.

Your hands will appreciate the metal on the rear of the tablet section, however, as well as the keyboard dock, as it’s nice and cool to the touch.

You can use the tablet without the dock, and that’s cool, but the keyboard on offer here is much nicer than the on-screen virtual keyboard of Windows 8, providing a decent amount of travel that doesn’t require much effort for comfortable typing.

There’s a little bit of flex in the keyboard as you type, but it’s nothing that will have you concerned, and there is a satisfying click to everything, with virtually no characters lost.

Battery life proved to be as strong as it has been on the Android versions of the Transformer hybrids, with around 13 to 16 hours capable while docked, during our tests, though this can change depending on what you’re doing. Asus rates the keyboard dock and tablet together for roughly 19 hours, and we’d believe that number was possible if you kept WiFi switched off.

By itself, the tablet is rated for just over 10 hours, and while we didn’t do much testing of the tablet section alone, would see that 8 to 10 hours seems likely here.

Some of the added features are nice to have around, too, including Near-Field Communication technology, a small USB port converter that adds an extra USB port to the power port when you’re not using it, and an 8 megapixel camera (for when you decide to take pictures with a tablet).

You can always use the tablet section by itself, and with the charge-to-USB converter, you can bring a USB port with you. We used ours for checking out the USB key.

Asus has, for the most part, crafted a well built machine in the 810. Between the metal casing, the reasonable Intel Atom chip that we’re seeing in so many devices, and the lovely keyboard with a decent amount of travel, this is one computer we’d be relatively happy with. In fact, in the tablet section, it’s a pretty solid device, with good looks and a decent performance.

But really, the area where we found problems tended to be around the keyboard dock, which threw out some surprising issues, to say the least.

One of these is a keyboard bug, and it happens if you leave the screen docked for a while, wake it up from its slumbers, and try to use it.

Sometimes, the keyboard dock when connected just won’t work properly, sending a third of the characters you type to the tablet, and not the entire stream. As you can imagine, it makes unlocking your computer from its password-protected sleep state kind of a chore, as well as typing anything in general.

In fairness, it’s an easy fix – simply disconnect the tablet from the dock and reconnect it again – but it’s still an odd bug, and even happened several times while we were writing this review on the laptop.

The USB ports on the keyboard dock also aren’t as high a quality as we had hoped, with only USB 2.0 ports here. Maybe that doesn’t matter much on an Android device, but on Windows 8, you’re really hoping for components that say 2013, and that’s not USB 2.0.

Neither is the trackpad in this dock, which supports some gesture controls, but not all of them. We had problems with zooming, though scrolling worked. It’s probably a good thing that the 11 inch screen is touch sensitive, because if it wasn’t, the lackluster mouse wouldn’t help one bit.

On the slate section, we’d have preferred a little more storage built in, as Windows 8 tends to chew through more than you might realise. The fact of the matter is, like the VivoTab Smart, 64GB of storage for a Windows 8 device roughly translates to having 31GB available for you when it’s first switched on, and while there’s a microSD slot for expanding it, a little over 30GB left over isn’t much to write home about, or on, for that matter.

No SD card slot, either. Strange.

Interestingly, the dock lacks an SD card slot, something we’ve seen on the dock section of the equivalent Android tablets, but is missing here. That’s surprising given that nearly every Windows laptop features one, since it makes moving images over from digital cameras easier.

Oh, and there’s nowhere to leave your pen, which is surprising.

Asus gives you one of these nifty Wacom-equipped digitising pens, but nowhere to put it. Just make sure that shirt of yours has a pocket.

The Asus answer to how a Windows 8 hybrid notebook tablet should be done is a good one, with the company taking its expertise with previous Transformer endeavours and adding that Windows 8 touch.

Overall, the VivoTab 810 is a great piece of kit, and about the only thing stopping us from saying “go get it” is a bug that really needs to be patched with the keyboard and the price, which is over $200 more than Acer’s version, though the build quality is better here.

If battery life is chief on your priorities for a tablet and the whole Android side of things didn’t phase you, this is one machine you’ll probably want to check out. 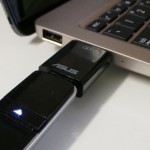 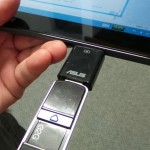 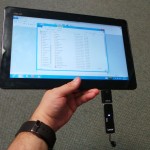 You can always use the tablet section by itself, and with the charge-to-USB converter, you can bring a USB port with you. We used ours for checking out the USB key. 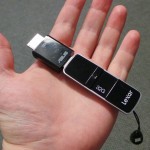 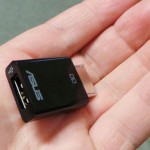 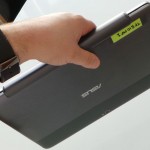 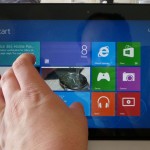 The VivoTab 810 has a nice screen with multiple touch points. 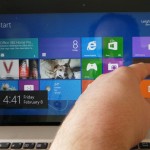 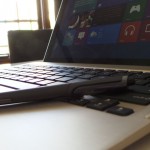 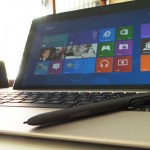 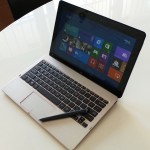 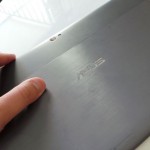 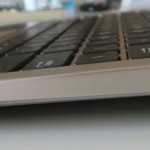 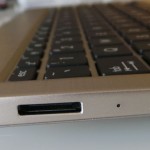 No SD card slot, either. Strange. 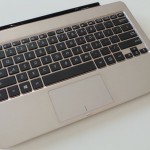 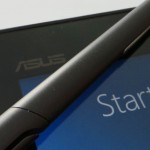 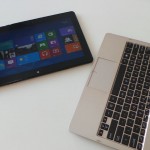 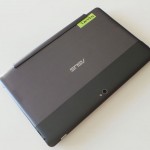 Notebooks in disguise: Asus VivoTab 810 reviewed
Price (RRP): $1099 Manufacturer: Asus
Decent battery life; Well built; Comes with a stylus; Asus supplies a power port to USB converter, which is useful for adding an extra USB port to either the tablet or keyboard dock;
USB ports are rated for the older 2.0 standard; A very strange bug that has to do with the keyboard dock keeps popping up and stopping us from typing; No place to put the pen; Needs more storage inside; Expensive;
Overall
Features
Value for money
Performance
Design
3.8Overall Score
Reader Rating 0 Votes
Share
Tweet
Share
Share
Tweet
Share