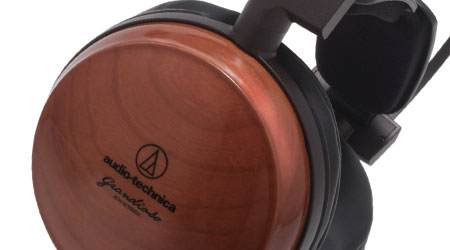 With ‘Grandioso’ emblazoned in gold script on the packaging, and in black script along the lacquered wood of Audio Technica’s ATH-W1000X, it’s clear these headphones are not intended for the hoi poloi. No, these are ‘important’ headphones.

They employ wood their construction, for instance, a material valued for its acoustic properties and used for centuries to make the great and serious instruments of orchestra, including violins and pianos (and glockenspiels!). Indeed, the virgin black cherry wood in the ATH-W1000X is the same as that employed in concert halls and many pianos. So the W1000X are referencing musicality – and quality too, of course.

Following the cues, then, Audio Technica is being ambitious with these headphones, and has priced them accordingly at a dollar shy of $1000.

The W1000X are a closed-back design suspended inside a magnesium frame, the latter offering the twin attributes of strength and lightness. Inside each earcup is a single 53mm driver, with a stated frequency response of 5Hz to 42kHz.

Suspended from the frame is what Audio Technica calls ‘3D wing support’. This comprises two movable plush-covered counterweights that rest atop your head, adjusting the fit of the heapdhones to individual head width and height as they do so. The system is extremely comfortable, with the headphones sitting as light as air and providing good isolation from ambient sound to create a nicely enveloping experience, but without the listener ever losing their sense of place.

The counterweight adjustment arrangement doesn’t really achieve a ‘secure’ fit on small noggins, though – the headphones slipped down the ears of the office ‘pinhead’. It also requires those with larger heads to remain still during listening sessions – any exhuberant head movements and the ‘relaxed’ fit of the ATH-W1000X becomes a very loose fit that needs to be resettled.

Audio Technica says these headphones also include a ‘floating mount system’ that ‘reduces unwanted vibration’ to ’enhance the natural and warm sound inherent to wood.’

The materials used in the earcups aren’t described, but appear to be soft vinyl. They were comfortable enough, but a higher quality product would better complement the luxe frame and wood highlights. This luxe continues to the 6.3 mm headphone jack, which is gold plated and finished in the same timber. The cable three metres long.

Note that this large-sized plug won’t fit directly into the 3.5mm headphone sockets of computers, portable music players and many entry-level audio components. Even with an adaptor, these devices would be unlikely to drive the ATH-W1000X’s to anything near satisfactory volume levels. 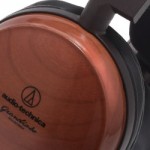 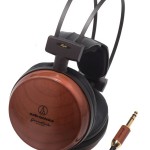 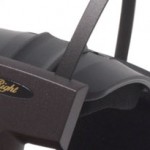 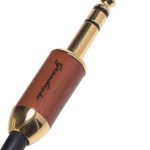 The W1000X require a good amount of power, ideally an audio component of good quality with a headphone input, or a dedicated headphone amplifier. Our test setup comprised an M-Audio high-end sound card for a computer connected to a Lehmann Audio headphone amp.

We tested with a variety of music on CD, such as Miles Davis’s Kind of Blue, Nigel Kennedy’s Vivaldi, Radiohead’s The Best Of, as well as live music from the Standing In The Shadows Of Motown soundtrack.

Highs and mids are definitely a thing of beauty here; there was a pronounced sense of ‘air’ around instruments, and percussion was vibrant and thrumming. Bass lacked the same presence, and failed to sound as ‘alive’ as the rest of the spectrum, even after selecting higher and higher volume levels. In both the jazz and classical samples, the highs and mids greatly overpowered the bass.

That’s not to say these headphones don’t sound excellent. On Kind Of Blue, it was like we were in the room with the jazz legend himself. The headphones revealed subtleties in the recording we’d not heard before, and we returned to it again and again, track after track, during what rates as one of the most enjoyable days we’ve ever spent at work

While we would have liked the bass to be more forward, we would happily live with other aspects of the ATH-W1000X. We recommend, them but with a caveat: test drive them for fit before committing the funds.

Audio Technica gets into the head