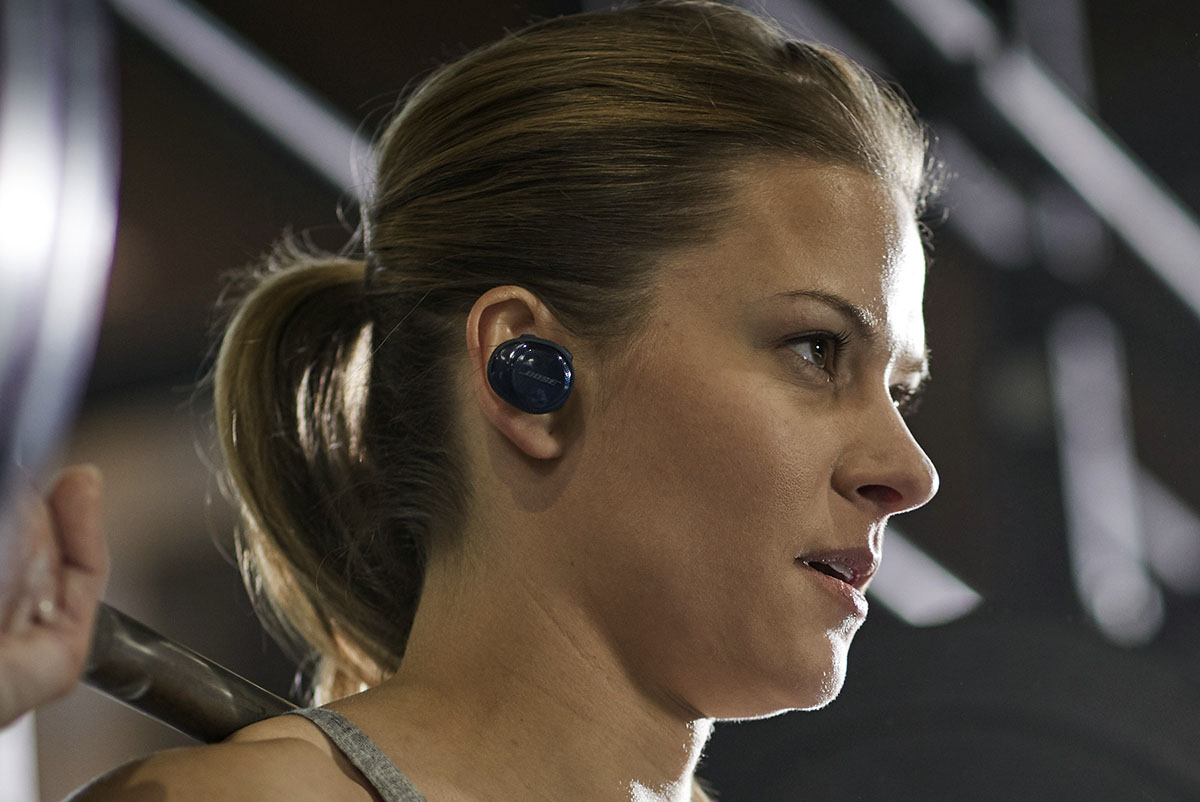 Bose’s SoundSport Free earphones are truly wireless and come with a case that recharges them. So far so good, but how do they sound?

The Bose SoundSport Free earphones are premium models, as you can see from the retail price. They are also separates. That is, the buds aren’t connected by wire. Instead, they are entirely separate, with their own little battery in each earpiece. As I’ve previously discussed, that leads to a design choice: light weight for comfort and security, or heavier weight for greater battery life.

The industry seems to have settled on lightish weight, and a compact case that can recharge the earphones a number of times, and Bose has gone with that model.

So how light? The press release says, “Each earbud weighs just under 10 grams”. The web page says, “15 g each”. Hmmm. My scales only resolve down to whole grams. They said 9 grams each.

Let me cut to the important stuff. Weight? Fine. Barely noticeable. Security? Excellent. Again, I did the shake my head thing, quite furiously, and they just stayed put. They stick out a little, so I thought that might be a problem (torque equals force time distance), but it didn’t seem to matter at all.

In part, that would be due to the attachment system for your ears. Basically, you don’t get an option as to whether or not you use “wings” or “fins” to hold them in place. The silicon tips and fins are all part of one moulding. Three sizes are provided, with the middle size already fitted. I found that the middle size ones were workable for my ears. The larger ones were just a touch better. Since larger fins are associated with larger tips, I was worried that they may not fit. But it was just a matter of bending them over a little more for them to slip under one of the ridges in my outer ears, locking the whole assembly into place. There was no need to push hard. The result was comfortable, and the were barely noticeable.

Incidentally, this arrangement is styled by Bose as “StayHear+ Sports Tips”. Get it?

There are three control buttons on the right bud, one on the left. You can do all the usual stuff, including changing volume, answer calls, invoke Siri or Google Assistant.

They come in a case which doubles as a charger. Each charge is good for five hours, and the case can charge them up twice more, so you get up to fifteen hours of use before you need to find additional power. If they run down, fifteen minutes in the case will give them 45 minutes of more life. The case itself takes a couple of hours to charge up.

They are held in place by sculpted bays and a lid that closes down firmly over them. There are seven contacts for each and a magnet draws them into the correct place. Putting them in and pulling them out was easy, to the point that I usually just put them in the case whenever they were not in use, so I never encountered an end of battery condition.

If I have a criticism, it would be that the case is quite large – some 104mm long – and may consequently be less likely to be carried than were it a smaller thing. Also, the thing is charged up via Micro-B USB. I now have a standard policy of wanting everyone to switch over to USB Type-C forthwith.

Instructions? Pah! Who needs those? The “manual” has six pages in seventeen languages. The English version has two diagrams and eleven – count them, eleven! – words. Allow me to quote the whole thing. On one page: “Download the Bose Connect app”. On the next, “Remove the earbuds and follow app instructions.” That’s it.

I guess that’s all you need, but there were immediate questions for me. First, just about everything with rechargeable batteries cautions you to charge them up first for several hours. On pressing the button that holds the charge case closed, two LEDs lit up. But there are five LEDs. Should I charge them up before removing the earbuds?

Actually, no. The case wasn’t fully charged, but the earbuds were, so they were right to go without any additional charging. The two solidly lit LEDs inside the case revealed that, as I determined when I downloaded the real manual from the Bose website. This was comprehensive, with 35 pages for the English section.

When you take the buds out of the case they announce their state of charge in a voice. I rarely heard this properly because it happens straight away, before I’d managed to get them in my ears. However, they turn themselves off after about twenty minutes. A touch on the buttons on each reconnects them. The right bud does the announcement. The left bud just sounds a tone to indicate that it’s connected.

You will want to download and install the Bose Connect app to your phone. iOS or Android; doesn’t matter. I used both. This will handle the Bluetooth connection for you rather than fiddling with the phone’s settings. You can connect at least two devices, and connect and disconnect through the app to use the earbuds with more than one phone. I switched a number of times from Android to iPhone and back again with no problems.

And you’ll want to have the Find My Earbuds facility provided by the app, just in case.

The control buttons are stiffly sprung, but I didn’t find that a problem because of their location on the rim of each earbud. You don’t push them into your ears to activate them, you grip them with a finger on a button and a thumb on the opposite side of the earbud and squeeze. The volume controls at the ends are raised, so all three sections on the right earbud are easily identified by touch.

So, how about range? I hate it when the connection between earphones and phone drops out even in a podcast. And when it comes to music, qualities such as tonal balance and dynamism of music delivery pale into insignificance if there are actual holes in the music. I hadn’t done any formal testing when I first turned my mind to this, and the reason my mind turned was not because of irritating drop-outs. It was brought to mind when I drove to my local shops, jumped out of the car and went to the shop. And the podcast I was listening to started dropping out. Then I realised I’d left the iPhone in the car. I counted my paces as I went back. Sixty. Let’s say fifty metres. Plus, the signal had to go through the metal car door, and indeed one or two more cars that were in line of sight. That was impressive.

A little more formally, I put the iPhone on a rock in my front yard rock and walked down the street. Again, at sixty paces it started dropping out. Turning around showed that the dropouts were worse from some directions than from others. From about 35 metres away, there were no dropouts regardless of my orientation. When I put the phone on the kitchen bench, roughly in the middle of the house, I could go anywhere within its walls with absolutely perfect reception.

So, now that we’ve dispensed with all those practicalities, how did they sound?

Well, pretty much exactly like Bose headphones. It was truly startling. Bose has seemingly tuned them to its “house” sound, which is smooth, clear, with a slightly forward bass and controlled, clean treble. Indeed, it was startling to hear the level of bass, and its depth. I think I’ve become inadvertently forgiving of bass performance in earphones (as opposed to headphones) because powerful, deep bass seems to be such a rarity.

Right at this moment I’m listening to Black Sabbath’s Sabbath Bloody Sabbath, and the bass line is clean, well defined, and a touch strong if anything, even though it’s usually a little recessed. “Wrapped Around Your Finger” by The Police had the kick drum closer than the bass guitar, although the latter was still full and rich. The album Once I Was an Eagle by Laura Marling opened with the same immediacy in her voice provided by truly high quality sound system, and while they didn’t paper over the early sibilant “Sir”, neither did they emphasise it. Bach’s The Goldberg Variations rendered by Glenn Gould – his 1980s version, not his career-making 1950s version – was full of detail (the tickle of fingernails on keys, Gould’s irrepressible hums) including the slightly bitey tone of the piano.

I’m casting my mind back, and I think the only earbuds that could run a challenge for sheer sound quality might be the BeatsX wireless models, reviewed here. Even so, I think I’d give the Bose SoundSport Free earphones a very slight edge on that front.

The Bose SoundSport Free wireless headphones really do the job of combining excellent practicalities, fine sound quality and very solid connectivity into one package for those prepared to pay a premium price.