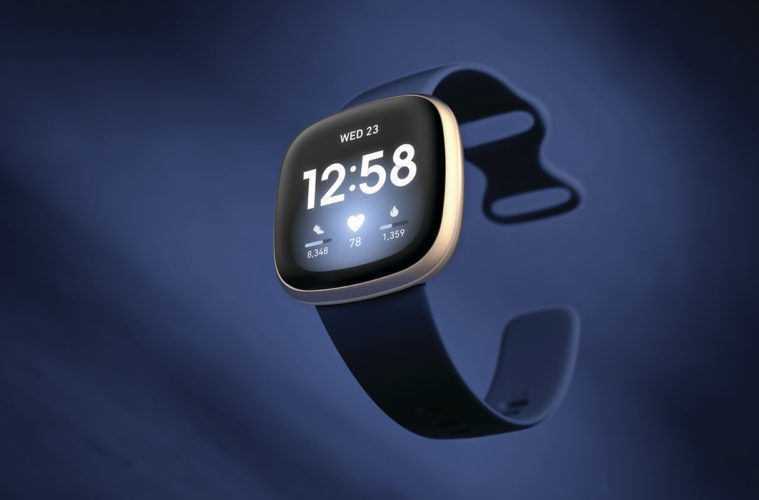 There have been significant changes with the new model over the old one. First, let’s talk physical. Although the body is very close to the same size, the Fitbit Versa 3 smartwatch’s corners are slightly more rounded. And that contributes to the one single backwards step in the 3 versus the 2. The single control button for the Fitbit Versa 3 now feels as though it is even further recessed into the side, kind of tucked a little under the face. That combined with the heavy springing made it hard to press. You don’t need to press it often, but pressing and holding is the main way to reach the voice assistant. Perhaps it will loosen up a little over time.

As I’ve suggested, every other change in the Fitbit Versa 3 over the 2 is an improvement.

For example, the battery life has been bumped from 4+ days to 6+ days. That claim accords with my experience over the past few weeks. The charging arrangement has been changed … and improved. Previously you’d place the Versa 2 into a kind of sprung clamp. When placed properly, the three contacts in the charging attachment would meet the three contacts on the back of the device and charging would proceed. But if you misaligned things by a millimetre, contact wouldn’t be made. With the Fitbit Versa 3, there are now four contacts in a quite wide square. The attachment has a magnet of decent strength that grabs the watch and draws it into place. It won’t let you put the watch on it the wrong way around.

If it’s getting low, 12 minutes in the charger is good for a day’s life.

The watch band on the Fitbit Versa 3 initially looked the same, but fitting arrangement is now a breeze, unlike the struggle of the previous model. Just push a little tab up and out pops the band. Place the end of replacement in and release the tab. Done. Easy, even with my stumpy fingers. The clasp is different, too. It looks ungainly, but I found it far easier to put in place.

The Fitbit Versa 3 is 12.4mm thick, although it seems thinner thanks to the profile I was complaining about earlier. The body is 40.5mm wide and 40.5mm long. The standard band is 20.8mm wide along most of its length. It comes with the small band attached, but you can replace one side with the included large size band. It weighs 43.9 grams with the large band. The edge of the watch is aluminium, finished either in black or in “soft gold”. The black one comes with a black band. The other gives you a choice between “pink clay” and “midnight infinity” (ie. dark blue).

On the back are the small green LEDs and the sensors by which the Fitbit Versa 3 divines your heart rate. I’ll note at this point that it seemed more accurate than the Fitbit Versa 2, generally matching my count when I was at the gym, without needing to rotate it to read the inner side of my wrist.

The first major change – one that’s working now – is that GPS is built in. GPS and GLONASS, the Russian equivalent. Fact is, I didn’t really mind that the tracking functionality in the Versa 2 relied on a connecting to your phone to use its GPS. But I can understand how many people would want to leave their phone behind while running, biking or whatever. As usual with these things, I found it took maybe twenty seconds to acquire enough signals to start tracking properly. GPS comes on automatically whenever you start up an exercise that involves travel. You know, walking, running, biking and so on.

Speaking of exercises, the watch will automatically recognise certain exercises and start recording them as workouts, although it won’t switch on GPS for those. You can switch off this feature. GPS does tend to drain the battery faster – Fitbit says that the battery life is around 12 hours if you somehow manage to keep GPS on – but since it’s only as long as the exercise, the reduction in life wasn’t obvious. One feature I would like is the watch auto-detecting when you’ve finished a workout and asking you if you want to end it. On a couple of occasions I returned from the gym, took off the Fitbit Versa 3, had a shower and went to bed, and found the next morning it was still in workout recording mode with an elapsed time of quite a few hours. (If you’re worried about sleep quality you can leave it on at night as well for sleep tracking, but I prefer to let my wrist breath.)

Of course, it syncs with the Fitbit app on your phone whenever it’s in range. The Fitbit Versa 3 has Wi-Fi (2.4GHz) built in so it can upload its data faster than if it relied solely on Bluetooth. It can store full detailed information – minute by minute tracking – for up to seven days. That includes exercise heart rate data at 1-second intervals and 5-second intervals the rest of the time.

The AMOLED display is nicely bright. Even under full sunlight it was clear and colourful. You can choose from dozens of different watch faces showing all kinds of data that you prefer.

As with the Versa 2, Amazon Alexa is built in which you can use with the inbuilt microphone to ask it questions, to which it displays answers on its screen. The font is pretty small. I had to have my reading glasses handy. Promised for later this year is Google Assistant.

Also promised for later this year are remote phone calls using the Fitbit Versa 3. It has a speaker built in. I guess in the near future we’re going to be seeing more people speaking into their wrists.

Everything about the Fitbit Versa 3 operated smoothly. This is well-developed, mature piece of technology.

That’s not to say everything’s perfect. For example, when you go into the “Exercise” app, all the many available exercises are listed alphabetically. I went to the app as I had with the previous two Versa models to select my four favourite ones, but that’s no longer an option. After you’ve selected an exercise from the list a couple of times it makes its way to the top of the list. But it did take a while to get down to Walk and Workout. I would like the manual control reinstated.

There are lots of apps you can install. Spotify comes as standard but there’s also Deezer for music. Of course, there are lots of fitness-related apps, but also some games, news headlines, calculators and calendars. Even a flashlight.

Default features include tap and pay, which I’ve previously covered, and a newer Find My Phone. This makes your phone produce a loud tone so you can find it when it has slipped under a pillow on the couch.

… but it is considerably more than a mere evolution. I do hope that side button will ease up over time, but that aside, the Fitbit Versa 3 is, well, brilliant.