The TouchPad integrates technology from two giants of the mobile computing world – HP and Palm – to create a tablet which, on paper, is match-ready for the juggernaut iPad.

The TouchPad is one of the more interesting tablets to grace the GadgetGuy test bench of late. Unlike most of the current crop, the TouchPad doesn’t have a widescreen display, opting instead for a 9.7 inch 4:3 aspect ratio capacitive touchscreen, similar to that of the Apple iPad. Absent, too, are rear cameras, a development that’s becoming commonplace on tablets this year.

Outside of these omissions, the TouchPad manages to include a dual-core 1.2GHz processor, 16 or 32GB storage, WiFi 802.11 b/g/n, 1.3 megapixel front-facing camera, and microUSB charging and data port.

A 3G SIM slot is included, but no 3G modem is provided in the device. HP has told GadgetGuy that the slot is for a later version of the TouchPad.

Audio exported via Bluetooth or the 3.5mm wired headphone port, and features Beats Audio, a form of processing that promises music “the way the artist intended”. This technology can also be found in other HP laptops and is recommended for use with Beats headphones.

The TouchPad also debuts the webOS operating system, a new platform with its own apps and app marketplace supported only by HP devices, The OS integrates a technology called “Synergy,” a concept HP says integrates services and social networking clients into the TouchPad in a way not yet seen. 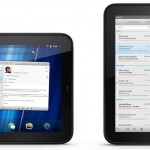 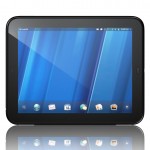 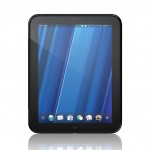 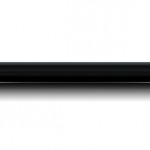 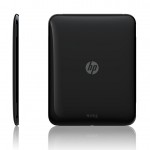 Fingerprints show up pretty easily on the black plastic of the TouchPad. 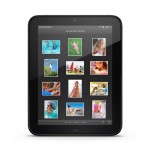 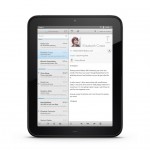 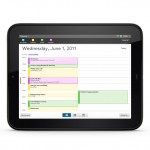 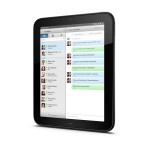 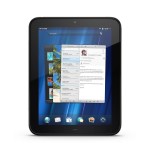 Performance – what it does well

There’s a lot to like about the TouchPad, largely because it feels so different from everything else available.

HP’s gesture controls work incredibly well, combining simple horizontal and vertical swiping movements to control which applications you use. It’s multitasking done right, offering such an easy control experience that you wonder how Apple overlooked it.

For Apple devices, you’re dependant on the home button for jumping between applications, pressing it once to go back to the home screen or twice to multi-task.

To switch between applications on the HP TouchPad, however, you swipe up the screen; a gesture that shrinks your current application down to a tiny window and allows you to navigate to a different one by swiping to the left or right. If you want to jump into a different app, simply press its icon, voila, you’re in. Alternatively, swipe upwards on the app icon to remove it from your list of running applications.

This method of navigating apps reminds us of RIM’s BlackBerry PlayBook, only it feels stronger on the TouchPad, with no fiddling required.

HP’s Synergy works well too, connecting services such as your email, LinkedIn, Facebook, Google Mail, Microsoft Exchange, and even WordPress blogs so that updates are shown at the top of the screen for all of these solutions. What’s really cool about Synergy is just how many services it supports: there’s room to add MobileMe, Dropbox, Skype, plus more from HP’s online app marketplace as they become available.

There’s also a unified search system called “Just Type”, which appears when you’re switching between applications. Here you can type whatever you want, and webOS will search for your word or phrase as it appears in files on the TouchPad, or present options to search via Wikipedia, Twitter, Bing Maps. You can even create an email with the term as the body text.

It’s an interesting concept, especially since it pushes the global search found on other tablets to a new level of web-connectedness. We’re not sure if anyone will use it in this way, but it sure is clever.

Then there are the little things that are worthy of appreciation.

Open the nicely designed HP TouchPad box and take the TouchPad out and you’ll find a little box with the phrase “Now comes the fun part”. It’s filled with manuals, warranty information, and a handy little black cleaning cloth. Even the power and USB cables look nice, sitting under a black flap with icons identifying each of the cables.

The charging pack has a unique cylindrical look to it; its reminds us of a film canister, albeit one with a USB port for recharging the TouchPad over the microUSB connection. If you want to go premium, the optional TouchStone Dock charges the TouchPad wirelessly via induction.

The finessing on show suggests HP has been paying close to attention to what makes for a good user experience, and contributes to the overall feeling of polish around the TouchPad.

Over the air updates are a nice touch too, allowing the TouchPad to automatically update to the next version of webOS without needing to plug connect to a computer.

First up, we’re not fans of the plastic chassis. In some ways, we’re reminded of the iPhone 3G and 3GS, with a curved plastic back that feels slippery when held with one hand. Yes, it feels good – the weight is comfortable and its soft curves fit nicely in the hands – but the TouchPad’s slick black plastic back attracts fingerprints more quickly than most other tablets we’ve sampled. Hugh Heffner-types will be constantly polishing away grubby smudges.

The performance of the TouchPad was variable, exhibiting noticeable lag during some operations.

Fingerprints show up pretty easily on the black plastic of the TouchPad.

Every so often, for example, the TouchPad struggled to keep up with what we were typing onto the on-screen keyboard. We had the same random delays while scrolling through webpages, with performance normal some of the time and completely dysfunctional at others. We also experienced delays when loading web pages, having to wait wait for the TouchPad to play catch-up on forms or page refreshes. We experienced lag when emerging from standby too, the TouchPad frequently failing to register our screen presses and taking up to a minute for a response.

Then there’s the 3G slot: with no 3G modem technology, this is just a cruel tease. As evidence of what prospective buyers might enjoy if they hold out for next iteration of the TouchPad, HP would have been better off sealing the slot entirely.

The downloadable application store for the webOS platform doesn’t feel quite ready for primetime in Australia either, with no paid apps currently available and many of the featured apps unavailable for download locally. For a new platform that needs as many apps as it can get, it’s surprising to find that quite a few of the apps HP suggests you grab aren’t actually available in your country.

The biggest negative, though, is the lack of connectivity options.

Every other tablet manufacturer seems to have worked out that customers demand the ability to plug memory cards in, but without a card slot or peripheral, the TouchPad is useless here. There’s no expandable memory either, so you can’t add more capacity or use a microSD to move files to and from the device.

So many of today’s tablet offerings are just more of the same, but HP’s TouchPad rates highly alongside the Asus Transformer for changing the formula. The differences it brings – gestures and Synergy – are well executed, but the overall package is let down by variable speed performance, a paucity of apps and poor connectivity.