The second 3D-ready smartphone to be released in Australia comes from HTC, and on first looks it betters LG’s debut model by providing a high-resolution glasses-less 3D screen, solid build, and 3D camera with flash.

HTC’s first 3D handset presents much of the design and engineering found among its more conventional stablemates, and sweetens the deals with new technology that make visuals appear to jump out of the screen.

First up, there’s the phone itself: the latest version of Google Android (2.3, Gingerbread), cutting edge dual-core processing technology, 1GB RAM, dedicated graphics over the Adreno GPU, and 14.4Mbps downlink from your telco.

HTC provides the latest version of its HTC Sense overlay too, meaning you’ll see animated weather, 3D flip clocks, and seven homescreens on a speedy carousel that are merely a finger swipe apart.

Storage-wise, HTC plays true to its miserly form, offering only 1GB of internal capacity. This is below that offered by other brands, but compensated somewhat by the provision of an 8GB microSD card in the box. This will afford most users enough storage for music, photos, apps, and a touch of video on the go.

The screen is high-end, with HTC going for a 4.3 inch qHD touchscreen (quarter HD). Capable of 540 x 960 resolution, this is a much higher-quality screen than the 480 x 800 pixels typical of premium Android smartphones. There’s also the added bonus of autostereoscopic 3D, a technology that makes it possible to see 3D images and video without the aid of special 3D glasses… but more on that later.

HTC’s screen isn’t the only 3D part of this handset. With dual 5 megapixel cameras on the rear ­– each with its own flash – this smartphone can capture 3D photos. When used in tandem to capture 3D, image quality, however, is reduced to 2 megapixel resolution, with the 5 megapixel range reserved for 2D image capture only.

Video can also be captured, with 720p HD recording on offer for both 2D and 3D. There’s also a front-facing camera, its 1.3 megapixel resolution suitable for video calling over Skype and the like.

The battery is also juicier, with a 1730mAh energy supply included, a higher dosage than the normal 1400-1500mAh batteries we see in Android phones. 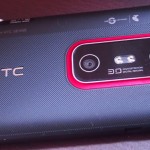 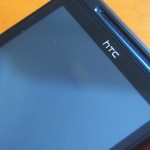 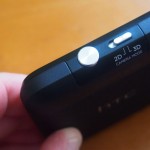 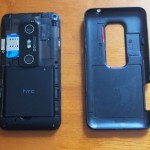 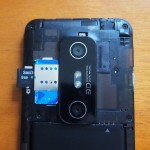 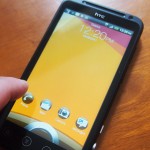 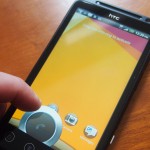 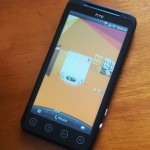 Flick your finger over the screen fast enough and HTC Sense spins your homescreens around like a spinning top. 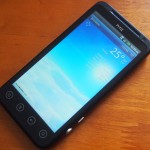 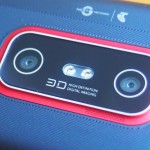 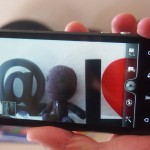 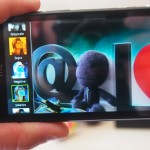 The camera is one of the strongest parts of the Evo 3D. It even includes photographic filters that work in 3D. 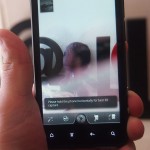 You can’t take 3D photos in portrait mode at all, as this error pops up.

As expected from HTC, the build quality of this handset is top notch. While not sporting the high-grade unibody metal design that has become something of a signature of smartphones from HTC in the past year, the Evo 3D still manages to feel sturdy in the hands. A rubberised back with linear etching makes the phone easy to grip, but with the rear camera proud of the surface by a millimeter or two, the hold isn’t as comfortable as we’d like.

The back plate comes off in a pinch if you need it to, revealing the SIM card holder, battery, and microSD slot. And good news for those who want to replace microSD cards on the go: you don’t need to remove the battery first, as the sections are in different locations.

HTC’s 2011-issue phones have all proved speedy, and the Evo 3D is no different. There’s no lag when jumping between apps here, and in terms of overall processing performance, HTC seems to have nailed it.

The overlay for Android HTC uses – Sense – has received an update too: the animated weather forecasts are more realistic, and the widgets display a really pleasing level of detail. For instance, as you rotate from one screen to another, you can see messages stacked behind each other on the SMS and email widgets. The flip-clock widget even has extra numbers and hinges on it, like a flip-clock does in real life.

Flick your finger over the screen fast enough and HTC Sense spins your homescreens around like a spinning top.

Rotating the screens is more interactive, too. You can swipe your fingers quickly across the screen and all of the homescreens will twirl  – like they were spinning in a carousel – making it easy for you to find which screen you want to view. You can still pinch-to-zoom and find all seven of your screens as thumbnails, but this added carousel effect makes for some nice interactivity.

The new version of Sense also introduces something we call the ‘centre ring shortcut system’. Similar to that seen in the Cha Cha, this requires you to drag the green answer icon to the centre ring at the bottom of the screen to pick up a call. We don’t like it, because the action means you can actually miss phone calls if you don’t perform it quickly enough.

Battery life is better than most smartphones. During the review period, we were constantly checking social networking sites, surfing the web, receiving email, making and taking phones and playing with the 3D screen and camera, and we managed a full day of use. Use your phone a little less than us – easy to do – and you’ll get two days out of it. We put this down the fact that the Evo has a little more juice than the usual 1500mAh battery found in Android smartphones.

One of the things that troubled us about the LG Optimus 3D was the lack of 3D content available for the handset. If that was an issue on LG’s handset, it’s even worse on the Evo 3D.

Included with the handset are three games that support 3D – Need For Speed Shift, The Sims 3, and Spiderman 3 – as well as a grand total of three 3D video clips, consisting of one trailer, one music video, and one advertisement for a camera.

If you’re one of the first 3500 people to buy it on Telstra, you’ll receive a free copy of “The Green Hornet 3D” on your handset.

The camera is one of the strongest parts of the Evo 3D. It even includes photographic filters that work in 3D.

When we first broke news about the Evo 3D, HTC mentioned it would have 3D content on the movie application for its Android phones, “Watch”. Load up the app and you’ll find a selection of older movie trailers, but none of them are in 3D. HTC told us recently that this will be updated with new content, but didn’t say when.

Unlike LG’s 3D phone, there’s no “3D Space” for you to explore. This was a feature guide that made it easy for first-time users of 3D to understand what exactly was in 3D about the handset.

HTC has done a few things right, however, and one of those is the screen. It’s just so much better than the 3D screen on the Optimus, with a higher resolution and a wider angle of view for enjoying the 3D effect.

You can't take 3D photos in portrait mode at all, as this error pops up.

The camera is also an improvement on the Optimus, largely because it’s been provisioned with a flash. We criticised the LG Optimus 3D for its inability to shoot 3D images in low light, but with a flash for each of its two cameras, the Evo 3D makes 3D night shooting possible. There’s even working photography effects for 3D, including sepia, solarisation, and inverted colour modes, allowing you to be more playful with the 3D images you’re shooting.

Switching from 2D to 3D is easier too, with a simple switch on the right side turning the feature on and off. When in 2D, applications designed for 3D go into a regular 2D mode without any troubles.

If you’re in the market for a top phone with decent 3D, the HTC Evo 3D pulls it off very well. Much like other 3D smartphones, more content is needed, but the hardware has been nailed.

LG channels Nintendo with a glasses-less 3D phone in Australia

LG makes 3D portable with a tablet and a phone