A no-nonsense touchscreen phone, the HTC Rhyme debuts some never-before-seen features, including a rechargeable speaker dock a design feature that helps you find and retrieve it from within the dark, murky interiors of a handbag.

One of the few not-black handsets released this year, the HTC Rhyme’s plastic chassis features three ‘kinda’ turquoise colours that cover the frame and rear of the handset. It’s a unique aesthetic that, without being overly pretty, manages to communicate that the Rhyme is intended for the ladies.

Handset design doesn’t deviate much from other HTC handsets, including the recently reviewed Desire S. It shares this phone’s 3.7 inch capacitive touchscreen, but not the excellent scratch-resistant Gorilla Glass from Corning.

Under the hood, it’s all pretty much standard fare, with the Rhyme running on the same 1GHz processor and Adreno 205 GPU found in the Desire S. The latest version of Google Android – 2.3, Gingerbread – is included, and there’s a microSD slot for storing up to 8GB of music, photos, videos, and apps.

Connectivity has been given a minor upgrade with the Rhyme, shifting Bluetooth 2.1 to 3.0, although most other options remain the same as provided in the Desire S. You’ll still find WiFi 802.11 b/g/n here, as well as GPS, and a downlink of 14.4Mbps when you connect to 3G. The standard microUSB port is also included, covered here by a little hinged door.

The camera is also very similar, with a 5 megapixel rear camera with LED flash and autofocus, and a VGA front camera. It’s possible to record video in 720p HD from the rear camera, too.

Like other recent models from HTC, the Rhyme benefits from the latest version of the company’s overlay to Android: HTC Sense 3.5. This new iteration includes smarter homescreen widgets, a better menu layout, and the same animated weather seen in the HTC Evo 3D and Sensation handsets.

In the box, you’ll find some bonus bits and bobs that make the Rhyme package a strong one. One of these is the “Rhyme Charm”, an LED cube corded to a 3.5mm headphone jack that you can clip to your handbag or shirt. When your mobile phone receives a phone call or message, the LED lights up to alert you to it.

A dock is also included, complete with a three-prong mechanism that will charge your phone when you rest it in the phone recess. With its built-in speaker, it also allows you to listen to music or amplify the alarms from your smartphone clock when needed.

Inner-earphones with a flat tangle-free cord are also included, as is a white slipcase for keeping the handset scratch-free.

Out of the box and in the hand, the HTC Rhyme reminds us very much of the original HTC Desire and to an extent the Desire S. Like the original Desire, the plastic body is easy to grip, although we do like the new “clearwater” colour scheme.

Taking technology from the Desire S should make this handset fast enough for most things, with apps, social networking, and web browsing performing fairly well.

The HTC Rhyme can take three pictures in a row and stitch them together in a panorama.

The latest version of HTC Sense makes this phone look truly uncluttered, with just two icons sitting at the bottom of the screen – menu and phone call. Seven homescreens are still here for you to customise, although a new clock and shortcut widget specific to this handset makes the phone look more stylish and presentable. This widget allows you to see up to five notifications type while still seeing the clock and weather on the one screen.

The lock screen we loved on the HTC ChaCha that was also seen on the Evo 3D has been left here, allowing you to unlock your phone from standby directly into a part of the phone, such as making a call, using the camera, reading email, or checking on stocks.

The menu has been cleaned up and now includes tabs for easier sorting.

Both the apps menu and web browser have been cleaned up too, with the browser now showing a back button, url/search bar, and refresh button, and your menu divided into tabs showing all apps, frequently used, telco supplied apps, and downloaded.

These changes to HTC Sense improve the whole usability of Android substantially, bringing Google’s OS past the point of geekery and making it easier for everyone altogether.

Typing on the handset is like the Desire S, though, providing a relatively solid experience, although one that could do with a little more screen real estate thanks to a keyboard that takes up a little under half the screen in portrait mode and over half in landscape.

Calls are possible too – it’s still a phone, after all – and the included Rhyme Charm is a nice addition. Plug it in and when you receive a phone call, the white cube lights up brightly, flashing if there’s a message or phone call that you’ve missed.

The connection between the cord and the handset is quite secure, so you can use the Charm cord to fish the phone out of a handbag or backpack.

One of the more important features here, though, is the speaker dock, an angled white block with a phone recess that can charge your phone and play audio. We’ve seen plenty of iPod and iPhone docks in our time, but an Android dock is new, and the way this one works is excellent.

The connection on the HTC Rhyme Charm is so strong, we were able to hold the phone using the cord of the charm. We wouldn't suggest doing it for long periods of time, however.

When the phone is left in the recess provided, three metal prongs on the powered dock are pushed against three contacts on the rear of the phone, simultaneously charging the handset and syncing the phone’s Bluetooth with the dock speaker, which apparently runs on wireless.

HTC has also programmed a screen that displays a music, clock and weather icon, as well as access to the phone, app menu, and screen brightness when it’s docked and charging. With all of this available on the one screen, the Rhyme performs as an excellent alarm clock, although the angle of the dock could be a little steeper.

The battery life is fairly strong on this handset, capable of between one and two days of use, depending on how active your social networking life is. We managed a day-and-a-half of use and were pleased with that.

Also of note how easy the Rhyme is to charge: simply rest it into the recess of the powered dock. Seriously, why doesn’t every phone have this?

We love the dock.

On the down side, HTC’s Sense 3.5 isn’t the good experience it is on the Desire S, with a second or two lag noticeable with many of the operations accessed via the menu soft buttons.

Being an Optus phone, some of the telco’s own software gets in the way of first time use. For example, with two call apps – the native Android plus an Optus one – it can be confusing as to which to use. You can select and set your preference here, of course, but better collaboration between HTC and Optus would have eliminated the need for any action at all.

HTC provides some neat features with its camera, throwing in a quick panorama mode and some vintage camera effects that can be applied to any image shot. Image quality, however, isn’t up to what we’ve seen from iPhone and Sony Ericsson smartphones, with pronounced noise even in those images captured in daylight. Nevertheless, the photos will be fine for sharing on Facebook or Twitter.

The camera features the ability to add vintage style effects directly to images.

It’s easy to admire the assortment of accessories HTC has bundled with the Rhyme. The Charm is a neat gimmick, and provides a point of difference that will appeal to some, but it’s the dock that’s the real winner. And while the absence of Gorilla Glass is disappointing – life inside a handbag can be rough – the Rhyme is a solid phone for anyone – of any gender – seeking a look-good phone. 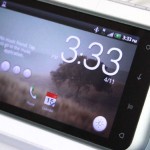 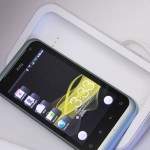 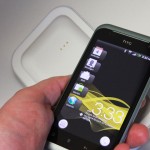 We love the dock. 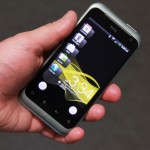 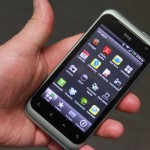 The menu has been cleaned up and now includes tabs for easier sorting. 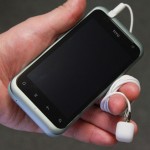 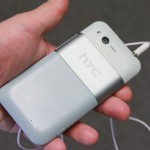 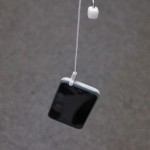 The connection on the HTC Rhyme Charm is so strong, we were able to hold the phone using the cord of the charm. We wouldn’t suggest doing it for long periods of time, however. 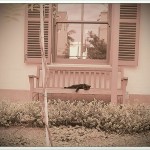 The camera features the ability to add vintage style effects directly to images. 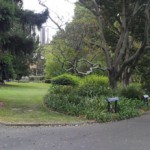 The HTC Rhyme can take three pictures in a row and stitch them together in a panorama. 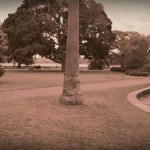 Panorama images can have filters and effects added to them, as seen here.