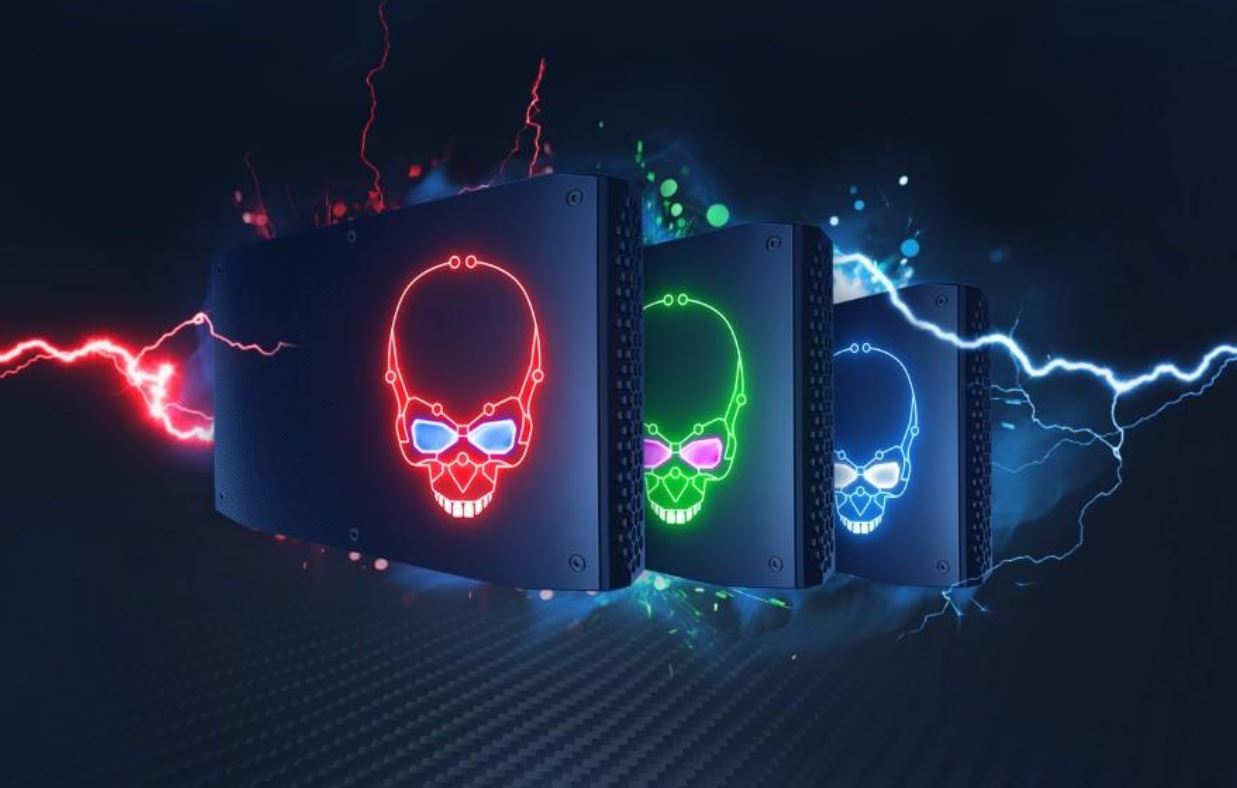 The Intel NUC – next unit of computing – has been around for six years. Perhaps it was an idea ahead of its time. The Intel NUC 8 VR machine blows away any misconceptions about ‘size matters’.

NUC is more about a compact concept. It comes in several packages.

The uses vary, but essentially these go into tight spaces. As I started this review, I found many instances where NUCs are the best option and my opinion changed from neutral to being quite a fan.

I love Intel’s internal code name for this – Hades Canyon. It was meant to be something awesome – something you might sell your soul to the devil for. And to the right user, it is.

Video performance is claimed to be like the NVIDIA GTX 1060 and CPU performance is a good 30% more than a similar 7th generation CPU. It can drive six displays from its onboard ports and GPUs. It can have two NVMe SSD – at present 4TB. This is no shrinking violet!

And it is interesting that Intel did sell its soul to integrate the Radeon (AMD) chip into its silicone.

There is a lower cost NUC8i7HNK with a locked (no overclocking) Intel Core i7-8705G, 3.1GHz to 4.1GHz Turbo, Quad Core, 8MB cache, 65W and Radeon Vega M GL graphics. It is functionally identical.

The Intel Datasheet is here

Who is the Intel NUC 8 VR machine for?

First locked or unlocked? The latter is for gamers.

Obviously focused on gamers, the Radeon RX Vega M GH graphics deliver up to 90 frames per second (FPS) for stunning VR. Then add the 7.1 sound and all the go-fast components. This diminutive box is one of the most powerful on the planet.

But it is not just for gamers. Throw in a pair of 2TB Samsung 970 EVO SSD and 32GB DDR4 SO-DIM, and you have a very capable CAD, video/still rendering machine that you can slip in your bag.

The key here is that these are part of the Intel Chip and are not affected by plug-in card bus limitations. It connects to CPU via embedded multi-die interconnect bridge (EMIB).

If you are really keen, you can read more about the chips here.

You select the SSD hard disk and interface (SATA 3 or NVMe). If you want to read about the fastest NVMe SSD look at our Samsung 970 EVO review here.

But I did notice that the NVMe supplied (presumably an Intel Optane) was PCIe 3.0 x two lanes (not four) which is only half the potential speed. I could not check, but I suspect that at least one slot is capable of four lanes.

It is solid with a removable top cover to access all internals. Although it is an all-in-one design, it is highly customisable. Fan noise is low even under full load. It maintained 30° outside temperature even under full load due to a liquid cooler.

The LED manager software controls 16.7 million colours on the skull top plate, three front LEDs and the power button. Fun but only for visual effect. I disabled it.

GadgetGuy’s take – I am no gamer, but the power of the Intel NUC 8 VR is impressive

It is small enough (except for the large power brick) to be portable.

Our gaming experts confirm that it will do things like Overwatch up to [email protected] and works well with Oculus Rift.

It is a tad expensive, but it is unique and has the Intel pedigree. We have not seen so much power in something so small – who says size matters?

Inevitably gamers will say that they can get better value from a build-your-own PC and they are right. But that is going to weigh several kilos and portability is the key here. Or they will look at a very high-end laptop and won’t get much change from $5K.

It will be available in Australia soon.

Lenovo, Razer to team up for gaming machines in 2016

Kogan crafts a “high end gaming” laptop, but is it?