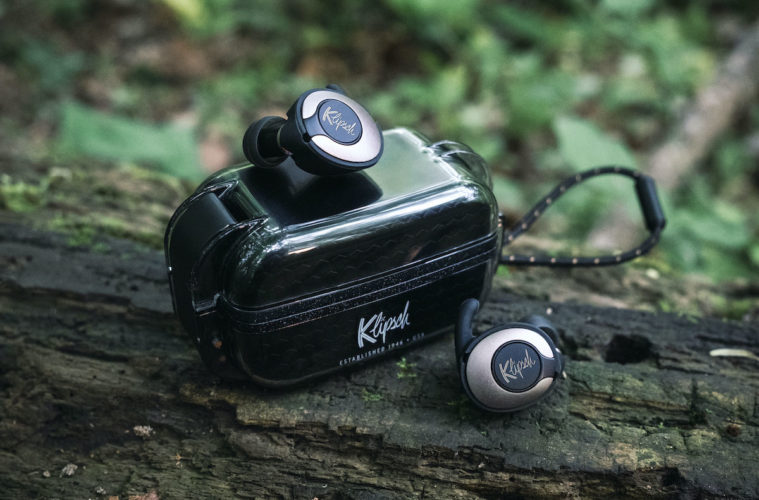 The original Klipsch loudspeaker was built in 1946, and it was a monster. You can still buy the latest iteration of it (for $40K!) But in 2020 I reckon Klipsch is going to be selling more of the Klipsch T5 II True Wireless Sport earphones. Not least because of one unusual feature, and another which may well be unique to this company.

It’s at this point where I say that such and such true wireless earbuds follow the conventions of the genre: two buds, charge case, blah, blah, blah. And in that broad sense, that’s true of the Klipsch T5 II buds. But in the detail, Klipsch has very much gone its own way. It hasn’t, for example, employed a compact case. It’s quite bulky, measuring 83mm by 45mm by 42mm and weighing 94.7 grams with the buds. The buds themselves are quite light at 6.3 grams each.

Nor does it have the usual spring-loaded lid. It uses the kind of catch you’d see on an equipment case. Why? Because of the feature I think is likely unique. Like the buds, the case itself is waterproof. That is, it’s IP67 rated, which is completely proof against dust and safe for immersion in up to one metre of water for up to half an hour. You don’t have to worry about dropping it in the drink. There’s even a replaceable cartridge of desiccating beads in there, in case any water is introduced with the buds.

They didn’t say, so I checked myself. The case floats, so it won’t sink straight to the bottom of the pool.

The case can be charged via USB Type-C … or by simply placing it on a standard Qi wireless charger. Hooray! That’s the unusual feature and it makes life so much easier.

The buds are rated at 8 hours of battery life, with three full recharges in the case. The Klipsch T5 II True Wireless Sport earphones are available in Black, White and Green finishes.

Since the Klipsch T5 II True Wireless Sport earphones are sports models, the buds come with fins that lock them into your ears. They did an excellent job for me, providing a very secure fit. Two other sizes are are included, as are one set of memory foam tips and a total of six different sizes of silicone tips. Klipsch notes that they all use a patented oval shape. This is supposed to be for a better fit, but since they are highly compliant I’m not sure that they make much difference. I found the best size for me was the second largest. What really was different was that the tips have a hard plastic collar which clips into place over the sound transducer, instead of the usual practice of simply stretching the silicone over a shaft.

I did find that the silicon collar to which the fins were attached did tend to slip on the bodies of the earbuds sometimes. You don’t really notice until you place the buds in the case and find that contacts aren’t properly engaging. Just readjust the position and all is fine.

Inside the buds are 5mm dynamic drivers. Bluetooth 5.0 is provided for connections, and in addition to the standard SBC codec, the earphones also work with AAC and aptX codecs.

Klipsch says that they have a connection range of up to ten metres. Actually, on my standard test they scored a solid 25 metres. Connection reliability was first class.

The Klipsch Connect app manages firmware updates for the buds, provides feedback on battery level and incorporates a graphic equaliser, along with several tone presets.

The overall sound of the Klipsch T5 II True Wireless Sport earphones was smooth and nicely balanced across the midrange and treble. There was none of that ear-piercing sense of overdone treble delivered by some earbuds. Instead, it was just plain enjoyable. The bass was somewhat recessed by comparison with other buds in this genre. I had had a play with the equaliser and found the best overall balance was by pushing the two bottom bands to maximum and the three upper bands to the minimum. The markings imply that’s a 12dB difference, but I think they’re mis-calibrated. The changes didn’t sound anything like that much.

With that adjustment made, the bass in Billie Eilish was still just a little back in the mix, but enjoyable and fairly full. At times, there was a very nicely detailed sense of spatial depth in the sound, such as the shake of the tambourine in the quieter parts of the track “Bargain” from the album Who’s Next. Moon’s drumming was solidly reproduced.

I used these buds pretty much exclusively for a week, and they were really quite satisfying. And easy on the ear with podcasts as well.

They worked well in handsfree mode. People with whom I spoke thought I sounded fine. They also have a “transparency mode”. A tap on the left control button – the buttons are softly sprung, and thus easy to use – switches this on. At first the level of the outside sound in this mode was too quiet. But then I found a setting in the app where you could turn it up. I pushed it to maximum and the level was just about right.

Namely, they’re waterproof and able to be charged wirelessly. Those who buy these will be pleased.