The tablet market is a very crowded one, but Lenovo hopes to differentiate itself from the competition with a neat and useful design, durable materials, and a great screen. Could this be your next tablet?

It seems like everyone has a tablet these days, and Lenovo is no different.

As the name suggests, the Yoga Tablet 2 is Lenovo’s second attempt at an Android tablet in the Yoga design, though in fairness, Lenovo has been making Android tablets for a while, even going back to a model made under the “ThinkPad” brand back in 2011.

This time, though, it’s a machine made for work and play, as Lenovo updates the first Yoga Android tablet with better specs, a better screen, and a feeling that this time maybe, just maybe, it will produce something to properly take on the big guys.

This starts with the screen, which is still 10.1 inches, but has been updated to support a higher resolution, up from 1280×800 on the original and now sitting at Full HD’s 1920×1200. The screen is an In-Plane Switching display, too, meaning it should support solid viewing angles, and being a tablet, of course it supports touch.

Underneath the display you’ll find the innards that make this thing tick, with Intel’s Atom Z3745 processor clocked at 1.33GHz, 2GB RAM, and 16GB storage, though this last part can be expanded via a microSD slot found in the tablet, also. Android 4.4 “KitKat” runs on this tablet, though we suspect an update to 5.0 “Lollipop” is in the works.

Cameras are also here, with an 8 megapixel rear camera and a 1.6 megapixel front-facing camera if you feel you need one, while connectivity has you relying on 802.11b/g/n WiFi and Bluetooth 4.0, with no Near-Field Communication found here, either.

Audio includes two front facing speakers, however, positioned at the base of the unit on the hinge.

And that’s a part we feel we need to mention, because the Yoga 2 incorporates a special hinge that hides a stand in the back of the tablet. The hinge can be used to stand the tablet up in a variety of ways, including upright, lying down, and even hanging up, since that stand has a small window cut out that can help the tablet attach to hooks.

Buttons can’t be found in abundance, however; it’s a tablet after all, which means touchscreen connectivity is what’s on offer. As such, you’ll find a large power button on the left side of the hinge, while the volume rocker, the only other physical button, exists on the left edge of the tablet.

Ports are few in number on this device, too, with a microUSB charge port on the left side of the tablet, a 3.5mm headset jack on the right side at the hinge, and a microSD expansion slot for adding more storage located under the stand.

The battery is built into the Yoga Tablet 2, not removable, and is rated at 9600mAh.

If there’s one thing you can’t accuse Lenovo of, it’s borrowing designs, and while some companies have fought over who created the basic slate first, Lenovo’s idea takes the tablet somewhere else.

Instead of your basic flat piece of hardware, the Lenovo Yoga Tablet 2 incorporates a curve on the side as the edge almost folds in on itself, a design that we saw in the first Yoga, and now makes an appearance here.

What does a curved edge do for a tablet?

A few things, actually, because it not only allows the Yoga 2 to differentiate itself easily in design, it also means there’s a grip to hold like a folded over magazine, and it means Lenovo can incorporate a stand in the design with a piece of metal that uses a hinge in that curved spine.

Can your tablet stand up all by itself? We're guessing no, but the Lenovo Yoga Tablet 2 can.

A stand of this sort can do a few things, too. You can make the Yoga 2 tablet stand up, almost like a picture frame, making it useful for watching movies or viewing pictures.

It can stay in that position and lie down, giving the tablet an angle for you to write on, almost like it was a real keyboard, even though it’s all on screen.

The stand can also be pulled out further to reveal a small hole cut out of the metal stand, of which can make the tablet easy to hang up in the kitchen or wall if you have a hook, or possible the back of a car.

In essence, the curved spine (technically cylindrical, actually) hides extra features while also making the form-factor closer to something that else you’ve used, like the folded over magazine, which is something Sony once did in a tablet design it didn’t continue with.

Sony’s Tablet S and Lenovo’s Yoga Tablet 2 aren’t exactly the same, but you can see the way the ideas are working, as both companies have tried to make the tablet more something you can grip like a book or another printed publication.

Lenovo is going one step beyond Sony’s 2011 model, too, switching to a more refined version with aluminium used in the construction instead of all plastic. This use of a metal material means the tablet is very sturdy and feels insanely well built, so does it work with this unusual design?

As a stand, as a tablet you can lay down and write on, and even as one you can hang up with the right hook, yes, Lenovo’s Yoga 2 makes a lot of sense, and we’re delighted to see a stand built into a tablet, making it one less accessory you’ll have to spend money on, so good stuff there.

But as a tablet you can hold by the hinge? That’s a little different, and in our hands, it wasn’t quite as firm a grip. It could be that the smooth metal is just too smooth and feels like it’s falling out of our hands, but it’s more likely just how heavy the Yoga Tablet 2 is, weighing in at 619 grams, which is heavier than the iPad Air 2 it’s technically competing with at 437 grams, and feels like it, too.

With the metal spine, it’s not an uncomfortable hold, but it’s sure not comfy either, and we actually found it was easier to hold the tablet with your less dominant hand holding the spine, simply because the textured back of the tablet not found on the spine made it easier for your dominant hand to grip.

It’s a design that won’t appeal to everyone’s hand hold, that’s for sure, but with the included stand, it’s also one worth checking out, because it could be useful for the kitchen, the office, or the car given what it can do.

And yes, just like last year, we’re still reminded of Apple’s keyboard and mouse, but it appears Lenovo is sticking with this idea, so there’s no need to talk too much about it. We’ll let the pictures do that for us.

Beyond the design, though, there’s the operation, so let’s get stuck into that.

For the second generation of its Yoga Android tablets, Lenovo has gone with Intel inside instead of a random quad-core 1.2GHz processor that didn’t fare too well. That’s a positive move, and we’re delighted to see the positively mediocre chip from the old model replaced with an Atom processor, the Z3745 quad-core chip clocked at 1.33GHz, paired in this model with 2GB RAM.

That’s enough of a combination to make the apps work without problems, though we did notice a spot of lag here and there.

For most things, you’ll find the speed is ample and definitely adequate for most applications you need to throw the way of the tablet, though Lenovo’s Android overlay can be seen as a little strange as it does get in the way. We’ll get to more on that later on, but for the most part, if you’re after an entertainment tablet, the Yoga 2 definitely passes with flying colours.

Battery life is another area where you’ll find solid returns, with a battery delivering around 15-18 hours of solid usage, and several days worth of standby time. The last of these — standby — was particularly noticeable, and if we left the tablet unused for a full day after a full battery charge, we still found 100 percent waiting for us when we wanted to use it.

That’s not bad at all — pretty impressive, actually — showing Lenovo has paid close attention to the excellent battery life from the last Yoga Tablet, and just brought everything else up to match.

Even the screen is an improvement, with Lenovo switching from the mediocre 1280×800 display of the old model to a bright and crisp 1920×1200 model in the second-generation model, with solid angles and only a smidgeon of wash-out when you take it to the extreme sides.

Front-facing speakers also make watching programs and playing games a little louder, and while they’re not quite as good as the BoomSound speakers HTC relies on, they’re still pretty good altogether.

In fact, “pretty good” appears to be an apt way to describe the Lenovo Yoga 2 Tablet, with enough of the typical features and a few of the different ones to make it a useful tablet for anyone looking to take entertainment with them, type on the go, or just have something they can read from.

But we’re not huge fans of the overlay Lenovo has thrown into this one, with some pretty noticeable changes to the way Android is designed that may confuse people in the process.

For instance, if you swipe up from the bottom, you’ll find the control panel shortcuts at the bottom of the screen, different from the top where Android overlays normally keep them. Down from the top, there’s a dropdown notification bar and a settings button, but that’s it.

Interestingly, there is no app menu like on other tablets, with Lenovo making its overlay more like Apple iPad operating system, iOS. This means your apps can be easily sorted, but that they’re on the home screens, with no specific app menu of their own. If you’re used to the iPad, you’ll find this familiar, but if you’ve come from another Android tablet, it’s a little foreign, especially for an Android device.

Wireless is also missing the latest and greatest, with 802.11ac WiFi not included here. That’s a real shame, especially when you realise the 802.11ac is now a couple of years old and really should be present in a tablet made for entertainment, which Lenovo definitely feels like it is channeling here.

Lenovo’s latest take on an Android tablet is indeed an interesting one, and the efforts made in this second generation product are far, far more usable than what we saw turned out from the company last year.

We’re still not sure about the design from a weight point of view, that said, but certainly for the desk, for typing, and for using the tablet in places you’ve never really thought about, the Yoga Tablet 2 is an intriguing proposition worth checking out. 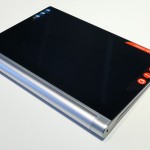 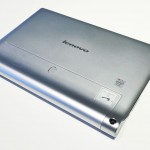 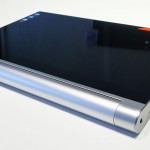 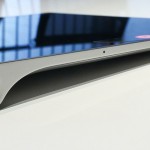 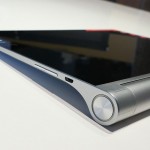 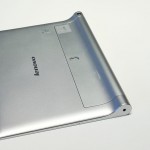 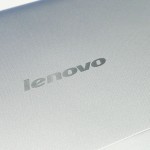 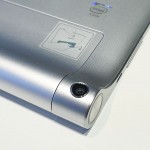 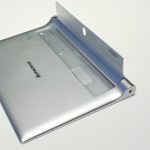 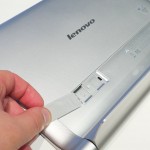 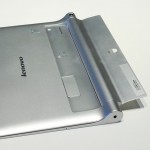 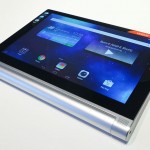 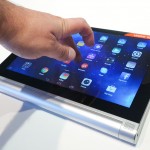 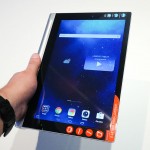 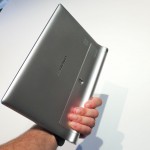 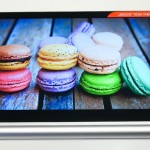 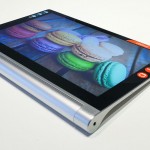 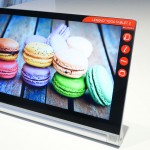 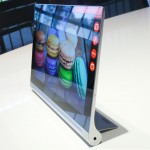 Can your tablet stand up all by itself? We’re guessing no, but the Lenovo Yoga Tablet 2 can. 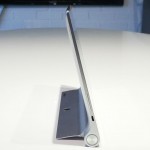 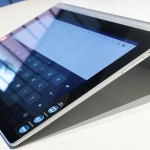 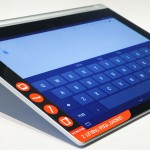 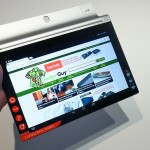 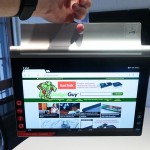 Review: Lenovo Yoga Tablet 2 (1050F)
Price (RRP): $399 Manufacturer: Lenovo
Fold-out stand is one of the best inclusions in a tablet; Stand includes a window hole for hanging the tablet up; Excellent battery; Fantastic screen; Storage can be expanded with microSD;
Lenovo’s Android overlay can be a little confusing; No 802.11ac; No NFC; Form-factor can be a little awkward in the hands; Heavy;
Overall
Features
Value for money
Performance
Ease of Use
Design
4.0Overall Score
Reader Rating 0 Votes
Share
Tweet
Share
Share
Tweet
Share