OLED is the new TV technology, and likely the one of the future. It brings together the advantages of plasma displays and LCD displays. (LED televisions utilised an LCD display, but with LEDs rather than fluorescent tubes, as a backlight).

Like plasma displays, OLED panels only light up the pixels in use, so they can save some energy and need no backlight. Like LCD TVs, the panels are thin and as manufacturing techniques improve, likely cheap.

So thin that even flexible OLED panels can be made, although we’re not likely to see that in TVs soon.

But there are other advantages over LCD and plasmas. First, OLED panels can go fully black, instantly and smoothly. LCDs can go fully black only by turning down the backlighting. Plasmas simulate black by flickering white for only a small proportion of the time.

OLED is fast. Extremely fast. Pixels can switch from on to off, or to any level of brightness, in times measured in microseconds rather than the milliseconds used to measure LCD performance. That eliminates motion blur and suits it better to processes in which timing is important, such as active 3D.

But OLED is also new. So it’s expensive. There may well be a price premium attached to the technology for years, but you can nevertheless expect the prices to fall significantly over the next few years. Remember that the first widescreen 42 inch standard definition plasma TV was launched in Australia for nearly $30,000.

LG’s 55EA9800 OLED TV is one of the first two to be launched in Australia (not counting the tiny one Sony released some years ago).

And it demonstrates that not all OLED panels are the same. Indeed, it differs at a fundamental level to the other OLED TV that has also been released.

OLED stands for Organic Light Emitting Diode. A thin layer of certain organic (ie. with carbon in their molecules) materials is placed between two control panels that run electricity through them. The OLED pixels produce light in response.

The colour of the light varies according to the particular materials used. Obviously red, green and blue pixels must be used, just like plasma and LCD TVs, and also the other available OLED TV (from Samsung). But LG has added a fourth colour: white.

So each pixel is formed by a block of four sub-pixels: WRGB.

Blue OLEDs tend to be relatively inefficient in the light production stakes, so to produce a bright picture with the right colour balance, steps must be taken.

One option – the one used by Samsung – is to have larger blue sub-pixels than the red and green ones. LG has kept all three colours the same size and added an additional white sub-pixel. When blue is required, you get a mixture of white and blue. You’d think that perhaps the blue would look washed out as a result, but in practice this isn’t the case. The blue looks just fine.

As for efficiency, this TV scores a 4.5 star energy rating label. The TV using the other OLED colour system scores 2.5 stars.

The results speak for themselves.

Ahead of the curve

Styling-wise this TV is very different as well from the competition.

It follows LG’s slimline approach of recent years. Super slim. The panel is amazingly thin for much of its area: just a hair over 4mm.

From the side it looks like the panel is just a single curved sheet of glass, swelling out somewhat in the middle rear. It is breathtaking.

LG says that the purpose of this is to deliver ‘an immersive viewing experience’. Perhaps. The curve is fairly subtle, though. Especially from front on. Regardless, the beauty of the TV is more than enough reason for it.

It sits on an integrated transparent stand that looks to be made of a high quality Perspex. This sweeps smoothly back, more deeply than the panel, to provide some stability. The panel itself is mildly curved, with the centre some 4cm further back than the edges. Around the full HD panel is – well, not so much as a bezel as a black non-operational area of the panel. This is just over 11mm wide at the sides and about 15mm at the top.

The TV has four speakers: two small rectangular ones in the transparent base and two downwards firing ones in the TV’s body.

The rear of the panel features a smooth, curved finish, with a panel provided to cover some of the AV connections, but not the USB and HDMI ones on the side.

The TV of course incorporates the very best of LG’s various ‘Smart’ network features. WiFi is built in. You get lots of internet offerings, including some streaming 3D content made available through LG, such things as BigPond Movies and TV catch-up services.

There is a degree of motion and voice control provided. For the former you need to attach the supplied camera/microphone assembly to the top of the TV (a dedicated USB socket is provided nearby). LG’s ‘Magic’ remote, which controls an onscreen pointer, remains the best system yet for navigating the various smart functions. It has a microphone built in.

For a full rundown of all these features, check out our review of the LG 55LA8600 from a couple of months ago. The smart and control features are identical, including the ability to use your tablet or smart phone as a second screen for the TV.

The TV is installed in the usual way – actually a bit faster than usual because there’s no need to attach a stand.

Note: the TV is not suitable for wall mounting. The normal LG wizard guides installation and all went perfectly smoothly, including tuning in the TV stations, setting up the network connection (I went for WiFi) and offering a bit of training on using the Magic remote control.

The default picture settings for the ‘Standard’ picture were pretty accurate, except that the sharpness control was up a bit too high.

The picture was clearly smoother when this was brought down to zero. The ‘Contrast’ and ‘Brightness’ picture settings were spot on.

The grey-scale test pattern I use to check this showed the very slightest tilt towards pink in the lightest grey shades, but this wasn’t noticeable at all in normal program material.

The regular viewing experience with high quality Blu-ray content was magnificent. I watched a couple of full movies and lots of test clips, and in my office, at night, with all the lights turned out, and it soon became apparent than this TV produced real blacks.

As in, the total absence of light. In my dark room when the picture faded to black, the TV disappeared completely.

And that is something to be cherished. It is something that has been absent, pretty much, from TVs since the last of the CRT TVs disappeared from the market. If your TV can go full black, pixel-by-pixel, then it can reproduce the subtlest of low-light details in dark scenes.

And those dark scenes are darker, and so more realistic.

LED-backlit LCD TVs have probably been best at this until now, but even they could only control light levels in approximate areas.

This TV will go full black in one part of the screen while remaining bright in another part, all the way down to pixel-level precision. Amazing.

On test patterns I use to check this the only limitation was that the light emerging through the glass tended to scatter a little, producing a slight glow against the black immediately abutting it. I guess then next development will be glass that manages to avoid this.

LG doesn’t say how bright this TV will go.

In practice it produced a nicely bright picture under my harsh fluorescent tubes. But thanks to the infinite blacks, it seemed even brighter. That’s what a massive contrast ratio delivers.

As I mentioned, LG says that the curve ‘delivers an immersive viewing experience’. It didn’t do anything much for me. But in a darkened room the perfect blacks removed all distractions from viewing, resulting in a real immersion in the picture.

LG’s motion smoothing is pretty good, with minimal artefacts. Yet somehow the motion seemed smooth even with this switched off – at least until the scrolling credits at the end of movie appeared. Then the switching speed of the display became obvious. These lines of text visibly jumped from frame to frame until I switched the motion smoothing back on.

That might not seem like much of an endorsement, but it means at the fundamental level this TV is doing what it should. LCD TVs soften this kind of judder because of the time they take to switch their pixels on and off, causing motion blur. In other words, their picture weaknesses mask judder.

The result of the fast switching is significantly improved clarity. I have a test Blu-ray that another company used to demonstrate the clarity of moving text on plasma compared to LCD. On this TV it was as clear as anything I’ve ever seen.

The 3D with this TV was, frankly, disappointing.

LG has long used a passive system, whereby the screen has each horizontal row of pixels alternating in the direction of polarisation compared to those above and below. In 3D the left eye image is sent to half the lines, the other image to the other lines. Matching eyewear then separates the two.

The advantage of this is light and inexpensive eyewear and virtually no ghosting or crosstalk (caused by leakage of the image from eye to eye). The cost is reduced vertical resolution.

OLED features fast pixel switching times, which ought to allow excellent active 3D. But with this TV, which sticks with the passive system, you lose that resolution. In practice, this means you need to sit further away to get a clean 3D image.

The sound quality from the speakers was unexceptional in the sense of it being neither better nor particularly worse than most other TVs. It was a touch brighter than normal, presumably due to the front speakers, and there was very little bass. Fine for watching the news and TV shows in which the sound is mainly used for dialogue.

For the best 3D, then, you might want to look elsewhere.

But if you want a TV with exceptional 2D picture performance, the usual quality LG smarts, and astonishingly attractive styling, then the LG 55EA9800 OLED TV is well worthy of your attention.

And it is also a fitting demonstration vehicle for the OLED to come. With its design it shows dramatically what can be done with this display technology.

Importantly, it suggests that our future TVs will be even better in several dimensions – colour and brightness and speed – than the TVs were are watching now. 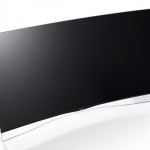 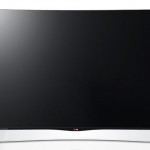 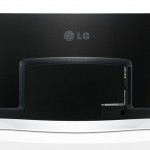 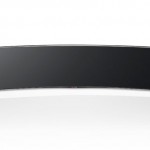 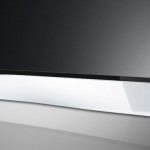 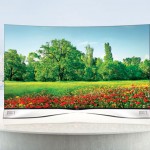 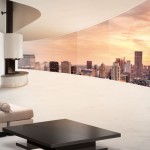 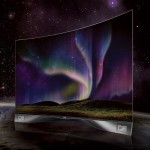 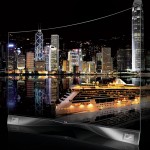