While the previous Nexus branded phones were for fans of Google and developers alike, it appears the search engine giant is getting serious about taking on other smartphone makers, by offering a premium collaboration with LG that comes with a price that will be hard to pass up.

The first official Google phone to be built by LG, the Nexus 4 represents the best technology LG could put in a phone at the time this was launched, offering developers, Android fans, and anyone after a decent mobile experience a top quality device for a budget price.

And when we say budget, we mean it. Available online for $399, Google is competing in an area normally dominated by the mid-range devices, and yet the specs are clearly in the high end, hardly a surprise given the Nexus 4 is technically a 3G version of LG’s upcoming Optimus G.

We previewed that handset earlier in the year, but they’re very close.

So close, that the Nexus 4 includes the same 4.7 inch IPS screen showing the slightly elongated and above HD resolution of 1280×768, which results in a pixel definition value of 318 pixels per inch, close to what Apple defines as “Retina” in its iPhone 4, 4S, and 5 models.

Under the hood, there’s the same technology, with a quad-core Snapdragon processor clocked at 1.5GHz and with the Adreno 320 graphics processor, partnered with 2GB RAM, which previous test have shown makes Google’s Android run super quick. LG has packed in a 2100mAh battery, too, similar to what’s on offer in Samsung’s Galaxy S3.

A choice of 8 or 16GB of storage is available with a $50 difference in between them, but pick carefully, because there is no microSD card slot on this handset, so you won’t be able to upgrade later on.

Connectivity is about normal, and while there’s no 4G like is expected on the LG Optimus G due out next year, but Bluetooth 4.0 with A2DP is included, as is WiFi 802.11 a/b/g/n operating in dual-band, DLNA, wireless TV sharing “Miracast” functionality, GPS, Near-Field Communication (NFC), a 3.5mm headset jack up top, and a microUSB port at the very bottom of the handset.

The rear camera is based around an 8 megapixel model, with an LED flash backing it up and providing assistance for tricky lighting, while a 1.3 megapixel camera sits on the front. Video is capable from the rear camera in the usual 1080p Full HD spec.

Only two physical buttons can be found on the Nexus 4, with a volume rocker on the left edge, while the power button sits on the right. The phone takes a microSIM, which can be installed by ejecting the microSIM tray on the left side.

And then there’s the latest version of Android, with 4.2 making an appearance, and the first smartphone to receive it. It’s Android the way Google wants it to be, and without any extras from LG, the manufacturer of the phone.

Ever since Google became serious about competing with Apple in the mobile operating system battle, we’ve seen an official flagship phone trotted out by the company, playing its part as the new awesome-sauce phone that Android lovers can call their own.

First there was the HTC-built Nexus One, then two from Samsung – the Nexus S, followed by last year’s Galaxy Nexus – and this year, there’s one more to add to the pile, with the appropriately titled Nexus 4, handled by LG.

The design is a little reminiscent of the iPhone 4 and 4S, with glass on both the front and back, although it does feature a softer look with a much wider display.

We found it was a comfortable fit in our hands, and with rubberised edges, you’ll find your fingers grip the sides much better than with a plastic or slick metal surface. Hold it with your fingers pressed against the front or back, however, and you’ll see it slip and slide out of your digits.

LG has certainly done a decent job at making this an aesthetically pleasing handset, that’s for sure, with a simple black face, and barely a centimetre framing the 4.7 inch screen on the top and bottom of the handset.

On the back, LG has looked past the simple monochromatic colour schemes most manufacturers choose for their handsets and gone with a a sparkling set of tiny squares, providing an almost pixelated holographic look that is really quite dazzling, so much so that you can get lost looking at it.

The screen is quite nice too, with great viewing angles that continually show off the colours your images and phone experience need. It is a very glossy screen, so expect some reflections, but if you push the brightness up, you’ll find it’s an easy way to overcome the heavy reflectivity.

Moving on to something more important, there’s the operation of the phone itself.

We’ve already mentioned that the Google Nexus 4 has more than a passing resemblance to an upcoming LG smartphone, and outside of a few other specifications – connection speed, body design, camera, LG’s enhancements to the operating system – it should be a very similar phone.

One thing that makes this handset special, however, is Google’s inclusion of the next generation of its mobile platform, Android 4.2, which still keeps the “Jelly Bean” moniker from the previous version.

Much like previous Google Nexus handsets, this is Android the way Google intends it to be, and with Android 4.2, it’s a showcase for the latest edition of the platform.

New to this incarnation of Jelly Bean is a cleaned up drop-down notifications bar where you can still swipe things out of it once you’ve seen them, as well as expand emails and other notifications to see more information in that drop down.

Google has also added a better settings controller to this screen, coming up with a nice grid showing you mobile connection, battery life, brightness, option for aeroplane mode, bluetooth, and a shortcut to the rest of your settings.

Google's new lockscreen, with multiple homescreens on the lockscreen. You know, just because you can.

The lockscreen has changed considerably in 4.2, too, with a few homescreens you can swipe between before you unlock the phone, offering you quick access to emails, a clock, or even the full camera with a simple swipe before you bring the phone back to life. The homescreens on this aren’t the same as your regular one, with only a few widgets offered here, not the typical set.

Widgets on regular homescreens can now be resized, and an improved keyboard has been included too, adding Google’s own flavour of that gesture-based Swype keyboard we’ve become such fans of.

This last one is particularly nice, and even feels faster than the offering from Swype, though it may take some time to train it with your specific way of speaking, err, writing.

Google has also added more functionality to the camera, offering a “photo sphere” function that allows you to make your own miniature version of Google StreetView maps. It can take a few minutes, but people who like experimenting with photography can have fun with it.

There have also been changes to the photo editor, with retro effects added to emulate the Instagram look, frames, the ability to crop or rotate, and even take more advanced actions, such as changed sharpness, contrast, add vignetting, or play with curves.

Overall, the entire phone just feels faster, and we wouldn’t be surprised if that’s something we need to attribute to Android 4.2, or possibly even the 2GB RAM, as we’re seeing on other phones equipped with this boost in memory.

It’s not the performance beast you might expect, and our benchmarks showed the Nexus 4 to run under the speed put out by the HTC One X from earlier this year, but outside of the synthetic benchmarks, it’s something we didn’t really notice.

A couple of things take the shine off Google’s sub-$500 marvel, which in fairness does manage to pack in more features than most other handsets for the price, no doubt an attempt by Google to bring more people over to its ecosystem.

One of these is access to a fourth-generation network, which means you’re stuck with connection speeds lower than the high-speed next-generation system.

They are 3G speeds and are on par with Samsung’s 3G only Galaxy S3, as well as the Apple iPhone 4S, however. We managed at most a download speed of roughly 20Mbps down, with a general average of between 8-10Mbps for the norm on this handset.

Upload speeds aren’t helped by 4G, so don’t expect this to be the greatest uploader of videos or photos, as you’ll only manage barely 2Mbps.

Battery life isn’t fantastic either, with only a day of life to speak of, though you might be able to squeeze a few more hours if you don’t use push email, social networking, or Microsoft’s Exchange Email platform.

The camera could do with a bit of work, too, specifically in the area of focusing, as we found that even with defined focus points, our camera wasn’t quite nailing the subject matter.

Mind you, that’s something we’ve come to expect from Google’s Nexus range of handsets, and from past experience, the cameras often get a whole lot better after firmware updates.

We focused on the green tomato, not the wall behind it.

With a price tag that puts it just slightly out of budget territory and perfectly priced in the mid-range, you’d be hard pressed to not consider the Nexus 4, as the combination of Google’s latest operating system and LG’s engineering smarts helps to round out the new Nexus phone and make it one of the better devices out there.

While the battery life could be better and we’d love 4G, this is Android the way Google envisioned and intended it to be, and the price is certainly very hard to pass up. Recommended. 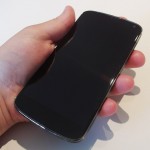 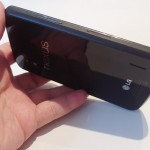 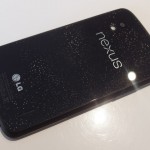 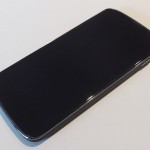 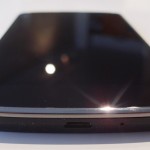 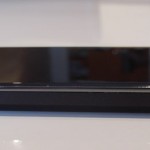 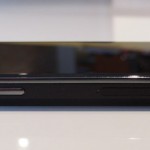 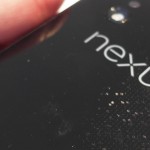 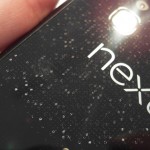 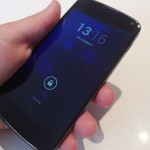 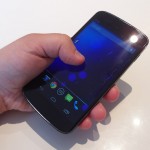 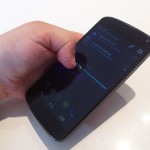 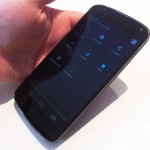 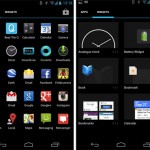 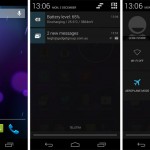 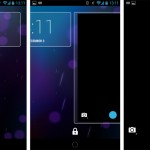 Google’s new lockscreen, with multiple homescreens on the lockscreen. You know, just because you can. 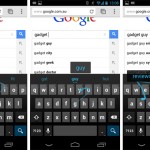 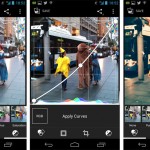 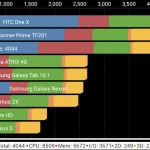 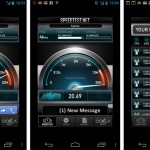 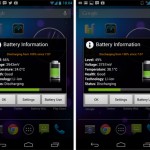 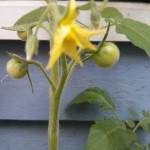 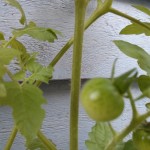 We focused on the green tomato, not the wall behind it. 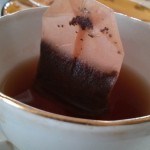 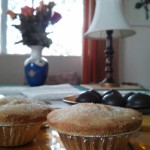 D-Link makes TVs out of Android phones and tablets