LG has once again collaborated with design icon Prada to ask the question: can phones really be a fashion item?

Fashion phones have, for the most part, been missing in action over the past few years, with the original Prada models being released at least four years ago to compete against Apple’s older iPhone models. Other manufacturers tried competing in this space too, including Samsung’s Armani handset and Motorola’s Dolce & Gabbana phone.

The third version of LG’s fashionable “Prada” series of phones, the new Prada – also called the LG P940 – is the first phone from the icon to feature Google’s Android operating system.

With this iteration, Vodafone has taken the exclusivity agreement in Australia, offering the handset in a very nice black box that oozes aesthetic appeal the only way the Prada brand can.

Outside of the high profile branding, LG has equipped the Prada with a 4.3 inch IPS touch screen supporting 480×800 resolution and 217 ppi. The case is made from a combination of plastic and glass, with the back set out in plastic textured like leather.

Inside, you’ll find a 1GHz dual-core processor with dedicated PowerVR graphics processor, 8GB memory (though only half is available to you), microSD slot, and support for Bluetooth 3.0, Wifi 802.11 a/b/g/n, DLNA, GPS, and a 3G downlink of up to 21Mbps.

The connectivity options also include Near-Field Communication technology, meaning that the phone could one day be used as part of Google’s wireless payment technology.

Like most phones, the LG includes a camera, with an 8 megapixel autofocus camera with LED flash and 1080p Full HD video capture, and a front-facing 1.3 megapixel camera.

While the specs seem reasonably high, LG has equipped the Prada 3 with the relatively old version of Android, version 2.3, also known as Gingerbread. LG has said that an update to 4.0 “Ice Cream Sandwich” is coming, but hasn’t said when. The overlay to Android is specific to the Prada, with LG crafting a monochrome version of Android with unique icons and widgets.

The Prada features a few buttons, all adopting a minimalistic design. On the left side of the handset are two small black buttons for volume up and down, while two silver circular buttons sit up top, the left for activating the camera and the right for switching the phone on and off. At the bottom of the handset, four touch sensitive light-up buttons serve for accessing the menu settings, home, back, and search.

A 3.5mm headset jack and covered micro USB port also sit on the top and are the only visible ports on the handset.

It would be a safe assumption to suggest that few smartphone handsets are designed to evoke a sense of luxury, but here in the Prada, we have exactly that. The name “Prada” brings a touch more prestige than the common phone manufacturer that would normally grace this handset may receive.

In fact, the regular Prada customer would expect that a phone brandishing this name would be a premium phone, no different to the high quality apparel and accessories the company offers.

For the most part, these people will be satisfied, as much of the technology thrown into the Prada is of a high standard.

While the phone lacks what seems to be hot premium technology for smartphones in 2012 – a quad-core processor – the dual-core chip on offer in this handset doesn’t have many problems running most applications. We had the occasional slow down in Instagram, but that could be fixed up in a patch later on for that app. In general, most applications ran quickly, with little lagging while browsing the web or switching between other apps.

The Prada features a very black and white look.

Support for a recent version of Bluetooth (3.0) is useful as is the inclusion of Near-Field Communication (NFC) technology, which could prove particularly handy if heading to a destination that allows you to make payments over your phone. An eight megapixel camera with LED flash is also present, a useful addition that features reasonable colour recreation and little noise in dark environments.

The 4.3 screen has decent viewing angles, but could certainly do with a boost in resolution, however, as the 480×800 resolution isn’t in the same league as the Prada name. We’d expect higher, as many handsets now offer at least 540×960, the so-called high resolution of last year.

From the software point of view, LG has tried to make Android look a little different with the Prada, specifically making a monochrome interface that features simple white icons, widgets, and an emphasis on minimalist design. While this can look striking, it only works with the apps LG has made them for.

The moment you install apps from anyone else – including the makers of Android, Google – you’ll find a bright and cheerful colour icon waiting for you, completely clashing with the minimalist scheme that was built for this handset.

That’s cause for a little frown, but that sad face might just get a little deeper when you see some of the other issues found on the phone.

One of these is the storage thrown into the handset, and while 8GB is built in, we’re only seeing 4GB available to you. Premium handsets often include 16GB of storage, and we’re a little surprised LG didn’t view the Prada as premium enough for this storage size. Granted, LG has at least done the right thing, providing a microSD slot for expanding the memory, but we’re still a little surprised why LG didn’t go for more.

The battery isn’t very impressive, either. While it’s become par for the course to expect a day’s life out of a smartphone, you’re lucky to get that out of the Prada.

If you do a lot of talking, texting, and web browsing – and if you’re a socialite buying into a name brand like this, we’d expect this to be close to the mark – you won’t last the full day. We managed to hit just barely a day, provided we kept the talking to about 15 minutes in total and still texted, surfed the web, and did our usual gamut of social networking.

The monochrome Android interface is slick, but the moment you add any app that LG hasn't made an icon or widget for, it destroys the specific look the phone is sold with.

LG’s build quality of the handset also leaves something to be desired, offering a plastic backing that doesn’t feel as strong as you’d expect out of the “Prada” brand. With a glass covered front and plastic at every other part, the LG Prada is left feeling cheap, even if it does boast to the world that you’re using a Prada device when it’s raised to your ear.

This is a stark contrast to the leather-textured box that the phone comes in, the handset at that point offering what feels like a premium package for the more refined individual.

While there are some obvious problems with the Prada, it does manage to nail one design aspect that few handsets have managed to get right: the microUSB port.

Generally, phones don’t bother trying to protect the charge port, with some attempting it merely by including a bit of plastic that hangs off the side. Here in the latest iteration of LG’s Prada, the company has a sliding metal door that makes it very easy to protect the charge and data port from the elements.

The sliding door covering the microUSB port is one of those things we wish other phones had.

While LG’s Prada has managed to get a few things right, it feels more like Prada should have put the phone through quality control before it was released with the likeness of such a prestigious design house.

If your idea of a phone is something you can show off to your friends, you may have found your match, but people seeking a solid mobile experience have a lot more to choose from. 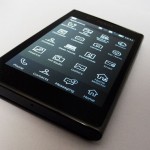 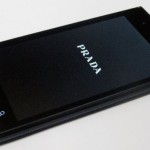 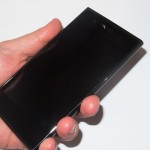 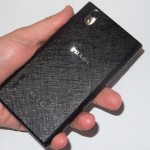 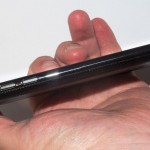 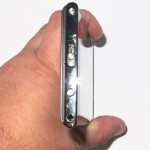 The sliding door covering the microUSB port is one of those things we wish other phones had. 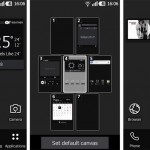 The Prada features a very black and white look. 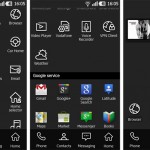 The monochrome Android interface is slick, but the moment you add any app that LG hasn’t made an icon or widget for, it destroys the specific look the phone is sold with. 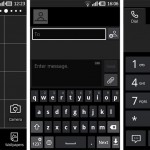 Forget the smart band, one company has a smart bra

Fossil reveals an old school watch with a smartwatch heart

Uniqlo asks your brain what you want to wear

Winter’s here, and so are Moshi’s conductive gloves