The iPad is certainly proving itself to be a capable tablet, and Logitech’s latest keyboard accessory aims to improve productivity by offering a full-sized laptop keyboard to fit beneath it.

The Logitech Fold-Up Keyboard is a two-part design comprising a black plastic case for housing your  iPad 2 (or new iPad) and, positioned underneath this, a QWERTY keyboard. The keyboard emerges from the rear of the casing in two halves as you raise the iPad from its lay-flat position, with each half moving in an arc around the sides of the case and locking together at the front once the iPad is fully upright in the casing.

The case supports the iPad in horizontal orientation, positioning the home button on the left and the camera on the right, with the keyboard underneath relying on Bluetooth for connecting to the iPad.

The Fold-Up Keyboard comes with a small USB-to-micro-USB plug, which can be used to charge the battery in the keyboard.

This case from Logitech is one of only a few that support the iPad's magnetic Smart Cover system, allowing Smart Covers to latch onto the top edge of the iPad and protect the screen like a magazine cover.

If you’re a fan of Apple’s magnetic Smart Cover system and have been annoyed at the lack of keyboard cases with support for the things, you’re in luck, as Logitech’s solution caters specifically to you. The design  leaves the left side of the iPad exposed, allowing you to remove the magnetic cover and then reattach it.

Installation is easy: simply push your iPad 2 into the case, letting the black plastic grips snap the case in. From here, you sync up the Bluetooth keyboard to the iPad’s Bluetooth connection, pressing down the “connect” button on the keyboard to activate synchronisation mode.

Owners of the 2012 new iPad  (iPad 3) may experience some trouble, but we were able to snap it into position. The fit was very tight and we did have some difficulty removing it, but given that the case isn’t designed for the slightly thicker new model, that’s hardly surprising. Meanwhile, a first generation iPad will not work with the Fold-Up Keyboard.

We suggest using the Smart Cover with this case as you can’t really fit any other style of cover or skin over the screen. Leaving the screen bare is an option, but this keyboard case is really designed to accommodate the slick roll-up magnetic cover.

That said, it’s not perfect, and the Smart Cover’s ability to turn the iPad into a stand doesn’t really work here. In fact, if you fold the cover back and try to stand the tablet up, you’ll find the cover snaps off.

Still, the cover is really just a neat magazine or book-like protection for the iPad, and the Fold-Up Keyboard still has more to offer… like a fold-up keyboard.

Simply push the button at the back of the case and you’ll be able to pull the iPad up, with the keyboard coming out from underneath and sliding into position as its two parts join together. The iPad sits up in a landscape position and is held in place by a metal support at the rear.

Unlike most of the iPad keyboard cases we’ve seen thus far, you don’t need to physically switch the Bluetooth keyboard on – pulling the keyboard out automatically activates Bluetooth, and pushing it back under the case turns the keyboard off.

Opened up, the keyboard on offer is the same size as Apple’s own iMac keyboard, so they keys are nice and big, and easy to adjust to.  Like other iPad keyboard solutions, this Logitech relies on a Bluetooth transmission, so you can’t use it on an aeroplane, but you can in pretty much any other situation.

Overall, the typing experience is quite smooth, offering a comfortable set of keys with more travel than you might expect. The plastic underneath the keyboard is a little flimsy, and can flex a little, especially if its not positioned on a flat surface. We noticed this especially when using it on our lap, but it didn’t seem to affect the typing experience. Overall, this was very positive, with the Fold-Up Keyboard making it possible to type in nearly any situation, offering reasonable stability and large keys.

On the down-side, you can’t use the iPad’s rear camera with this keyboard, either while it’s standing up or laying flat. The front-facing camera, however, is not obstructed.

The sheer amount of plastic in this case also may stop you from attaching some larger accessories to the iPod Dock connector. We tried plugging in a recharge kit from a competing vendor and found the large plastic base was stopping us from plugging it in. Apple’s conventional recharge cables should be fine, though.

Like many other iPad keyboard accessories, this Logitech makes your sleek tablet considerably chunkier and heavier, and at $180, it’s roughly double the price of many competing products. The full-sized keyboard and excellent typing experience, however, go a long way towards compensating for this. Overall, an excellent keyboard solution for the iPad2, especially those with a Smart Cover. 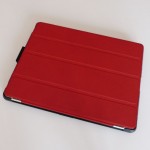 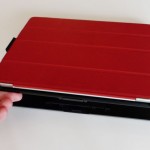 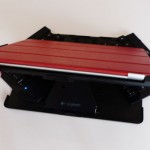 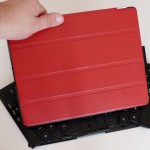 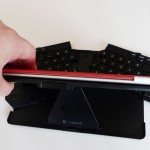 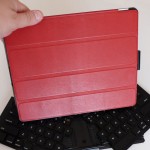 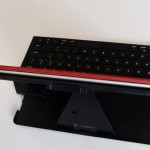 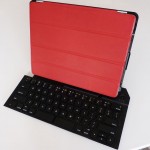 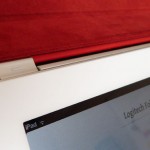 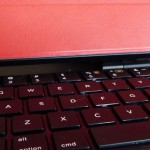