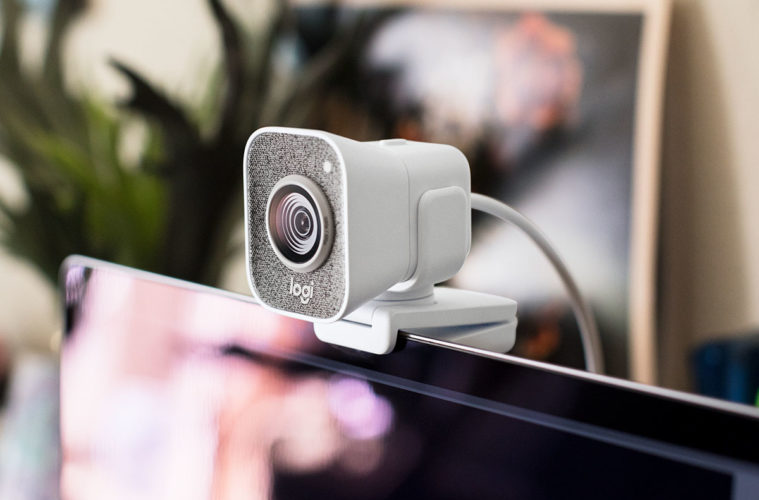 Logitech is well known for its webcams. Heck, my first 1080p webcam is from Logitech, and now nearly nine years old. And it still works fine. But here’s a new 1080p webcam with a focus on streaming, the Logitech Streamcam.

Yes, the resolution of the camera is 1080p, but importantly it will work at all normal frame rates up to 60p. That includes cinema-friendly 24fps and Australian broadcast-friendly 25 and 50fps. (For streaming, it can go as low as 5fps.)

The Logitech Streamcam is a small unit, almost square in shape when viewed from the front. In portrait orientation, it’s 58mm wide by 48mm tall. It comes in either graphite or that computer-style off-white. Around the lens at the front is a tweedy cloth, behind which are the live camera indicator light and two microphones for sound capture.

The 1.5 metre communications cable is fixed and terminated with a USB Type-C plug. For 1080p60 performance, it must be plugged into a computer supporting USB 3.1. Logitech recommends at least a 7th Gen Intel Core i5 on Windows 10 computers, or an 8th Gen Core i5 on Macs. Lesser hardware is needed if you’re content with running the camera at 720p30.

Of course, the camera comes with one of Logitech’s sit-on-the-monitor brackets. As usual with these things, it doesn’t look especially secure but it actually works quite well. It allows the camera to swivel horizontally along with up and down a little.

But I’ve got to say that one of the niftiest features of the Logitech Streamcam is a small inclusion that must have cost Logitech just a few cents per unit. That is, a second bracket for the camera. Just a little plastic thing with a threaded metal insert, it lets you mount the camera on a standard threaded camera stand. That includes small desktop ones. And that makes it easy to place the camera for interesting angles and views.

Both camera brackets allow the camera to be orientated in portrait or landscape mode. You switch by lifting the camera up out of the bracket, rotating by ninety degrees and putting the camera back down in the bracket. I was frustrated for a while since the camera wasn’t clipping into the tripod one cleanly, and tended to flop around within the bracket. Then I came to realise that the bracket is very slightly angled – it’s not obvious to the eye unless you’re looking for it – so it has to be the right way around for a nice neat clip-in.

What you will probably want to do is download and install the free Logitech Capture software. This is for recording from up to two cameras at once as well as controlling all the features of the cameras … if you’re using Logitech ones. You can also replace one or both streams with a screen capture or a window capture.

Amongst the features offered by Logitech Capture for the Logitech Streamcam is (digital) image stabilisation, Auto Framing, manual or auto focus and white balance, and various other contrast and colour tweaks. You can also set a chroma key for work against either a bluescreen or greenscreen.

The ability to automatically set portrait or landscape orientation seems to depend on the software being used. Presumably the camera senses which way around it is and sends some kind of control signal down the line. (I considered the possibility that it was the software doing something like detecting that human faces were the wrong way around and adjusting based on that, but it seemed to work even if the camera was pointed at nondescript objects.)

I mostly used the Logitech Streamcam on Windows computers, but it also worked well on my Mac Mini. The Logitech Capture software for the Mac is in Beta, but seemed stable.

If you want to live stream, the webcam comes with a three-month licence for the Premium XSplit streaming software. You can try before you buy (it’s valued at $24.95 … US, I think). Or you can use something free like Open Broadcaster Software. You can live stream to platforms like twitch.com. mixer.com, Facebook or, of course, YouTube.

That’s something I didn’t do. Instead I did a lot of recording. The quality of the video was up there with the best for 1080p webcams, although it suffered a little in comparison to that produced by the Logitech Brio camera I normally use. But that is a 4K camera and costs a hundred dollars more. The placement flexibility was particularly welcome.

Auto framing was a lot of fun. It zooms in to make sure your head occupies at least half the frame height, and then it digitally slides this zoomed-in section around to keep you, as far as possible, at the centre of the frame. In other words, it follows you around. But when played back on my large monitor, the limitations of the 1080p camera become clear, since the zooming is digital and thus of lower resolution. So that view tended to be quite soft. I suppose that would work better with the 4K Brio, except that Logitech Capture doesn’t provide the Brio with that capability. I’d suggest that with the Streamcam, you place the camera for optimal picture quality and exercise some discipline in keeping yourself in frame.

Colour was excellent. The more light you can deliver to the subject – you – the better, but even under my standard room lights the results were good.

The sound recording was, as is usually the case, a little distant since you’re typically around 800mm from the microphones. Serious streamers are going to have a separate microphone. For Skype and the occasional Zoom meeting, though, the built-in microphones are more than adequate.

The Logitech Streamcam is a fun little webcam. It produces a good picture and is highly usable. The placement flexibility is particularly welcome, letting those who stream break free of the standard camera-on-top-of-the-screen point of view.

Logitech’s product page for this webcam is here.