Review:
Nyko’s Zoom: does it shorten the Kinect space requirements, or does it fizzle?

Nyko's Zoom: does it shorten the Kinect space requirements, or does it fizzle?
2.5Overall Score

One of the biggest problems with Microsoft’s Kinect is that it needs a fair amount of room to play in. A new accessory for the Microsoft Xbox 360 aims to shorten the distance needed to play, so does the Nyko Zoom work, or is it a big waste of time?

When Microsoft released its motion gaming Kinect accessory in late 2010, we were critical of the amount of space needed to use it effectively. We found we needed to stand at 1.5-2.0 metres from the Kinect (and a greater distance for more players), and in a lot of rooms this isn’t possible.

Arriving later this year, the Nyko Zoom solutions comprises a transparent lens protection decal, a folded manual, and a warranty card inside the little box its supplied in.

The Nyko Zoom is the real star of the show here, with the accessory featuring three wide-angle plastic lenses designed to make the two 3D depth sensors and one video camera of the Kinect just that much more useful.

In theory, making the lenses wider should increase the Kinect’s ability to detect everything on the floor more easily, allowing the camera and depth sensors to pick up the whole of the player without them having to stand as far away.

Pulling it out of the box, it’s easy to see how this works. Simply clip the Zoom accessory over the three camera lenses found on the Kinect – you’ll feel it click into place.

Nyko recommends that gamers who will be removing the Zoom often should attach the transparent lens protection, but we’d say good luck to them. The transparent decal on offer is neither the right size nor offers the proper spacing, hardly offering any level of protection at all.

If you can get it in place, you’ll have some element of protection.  When we did, the decal wasn’t pressed completely against the lenses, something we have to assume is normal.

Using the Zoom, we were hopeful our Kinect experience would improve. After all, the product advertises “up to 40% reduction in space needed to play”. Surely it should yield a more enjoyable time with our Xbox 360.

In our tests, we found that the Zoom worked best when attached mid-game, avoiding the startup tests that often throw the Xbox off during the initialisation process.

In-game, single-player performance was enhanced, and we were able to stand around 20 percent closer to the Kinect. Motions, however, were often undetected, and gesture controls were more difficult to achieve. And with the Nyko upgade, using one hand to select control menu screens  – usually a simple task – proved impossible.

With two players, the Zoom diminished Kinect performance further, with only one player – the one placed on the left – detected by the system. Once we removed the Zoom, the Kinect was able to see second player on the right.

Curious about what was going on, we plugged the Kinect into a computer program to analyse exactly what the cameras and depth sensor could see. The results were surprising.

The left shows the image from the Kinect without the Zoom, while the right shows what happens when the Zoom accessory is attached.

Above, we can see that, on the left, the Kinect without the Zoom is mapping the entire room without a problem. The right, however, shows a wider look at the room, but the depth sensors aren’t seeing anywhere near as much. Black spots indicate what the Kinect isn’t seeing – and that’s a lot.

While we appreciate the idea, the Nyko doesn’t succeed.

During sessions at GG HQ, we frequently had to remove the Zoom from the Kinect before commencing play. We would replace it once the game was loaded, and it was only at this point that the Kinect-with-Zoom was able to detect us in the room. When it did, it enabled players to, indeed, stand a little closer to the Kinect, but overall, the experience was far from satisfying. 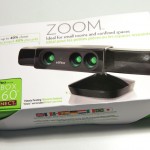 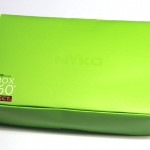 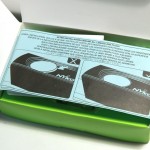 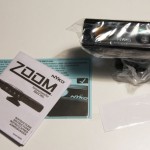 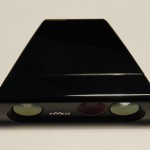 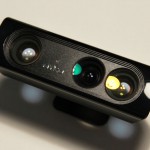 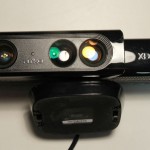 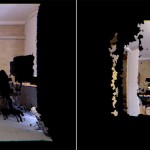 The left shows the image from the Kinect without the Zoom, while the right shows what happens when the Zoom accessory is attached.

Rumour: next Xbox may require the Kinect to work

Kinect to connect kids with Cookie Monster and cubs

Microsoft to bring the power of Kinect to Windows