Technology is changing everything around us, from the phone to the camera to the refrigerator, and yes even the humble pair of eye glasses. Before everyone’s eyes get cameras, though, wristwatches will get the tech treatment with the creation of the smartwatch, and Pebble is among the first to make that happen.

Launched initially as a Kickstarter project and build from funds sourced from online backers, Pebble is an electronic wrist watch that features a small monochrome 1.26 inch LCD with a resolution of 144×168, backlight, vibration motor, and sensors to determine angle and light.

Four buttons sit on the Pebble, with one on the left side to activate the backlight an go back to the main screen, while the three on the right act as up (top), select (middle), and down (bottom) buttons, as well as being able to remap these to perform different functions based on what Pebble app you happen to be using.

Essentially, Pebble is seen as the next generation of wrist watches as it not only can be updated with multiple watch-face designs, but can also control applications on phones and tablets thanks to its inclusion of Bluetooth.

Charging the Pebble is handled through a magnetic connection that takes its power through USB, while the battery in the Pebble is rated for lasting up to roughly five days and cannot be removed.

Wearable technology has been a long time coming, and while we first got a taste of a modern electronic watch back when the square iPod Nano could be attached to the wrist, we’ve been wanting something purpose designed since then.

Enter the Pebble, a wristwatch featuring designed to work with your phone and tablet to send messages, call notifications, and send other information back and forth, all the while telling you the time.

Aesthetically, the Pebble is a pretty minimalist affair.

A black back with not much to it.

We didn’t bother to wait for the grey one we had ordered (based on updates to the delays, we suspected it wouldn’t arrive until August, and switched back to black), but overall, this is a pretty basic looking watch.

In order for the Pebble to work, you will need a smartphone or tablet running on either iOS (Apple) or Android.

Once you have this, simply connect the two devices using Bluetooth and run the Pebble app, synchronising the two devices and allowing files to be uploaded to the watch, as well as data sent to and from the device.

With a connected smart device, watch faces can be downloaded from the web and transferred to the Pebble, notifications can be sent to the watch, and applications can be controlled.

For instance, using the native app on Android (which was our primary test bed), Gmail notifications were sent directly to the watch about a second or two after our phone received them.

Even with a small 144×168 LCD, you can read a few lines of the email before you’re forced to read the rest on the phone, which is more than enough to give you a hint of just who sent you the email and about what.

Phone calls and text messages are also sent directly to the Pebble, with the watch vibrating when one of these notifications happens.

A great example of how this is useful is if you leave your smartphone on silent or in a different location (say a handbag), your watch will buzz on your arm and tell you who’s calling you, with one of the buttons able to be pressed to accept or reject the call.

Text messages likewise read back in the same manner as an email.

Music applications are the other effective use for the Pebble, and some of this is built natively in Pebble’s app.

With this functionality, you can use the Pebble to control the music playback on your smartphone or tablet, with pause, play, next track, and previous track all working, as well as track information being transferred.

Some track information doesn’t work natively, such as in Pandora’s official app, but from what we understand, that’s something Pandora’s developers need to fix.

Interestingly, we found that the perfect scenario for using the Pebble to control your music was with Bluetooth headphones, which when used with the smartphone, provide you with a completely wireless environment for you to check on and play music without ever having to pull out your mobile.

Bluetooth can be switched off if needed, putting the smartwatch into what is essentially a flight mode, so you can check your wristwatch on an aeroplane, instead of just switching it off.

We’re also fans of being able to change the design of the watch, even if we’re relying on the ideas other people are generating.

Three faces are built into the watch, with two text based and one analogue model always there and not possible (at this time) to be removed.

The more code friendly people out there will no doubt embrace the SDK and start working on their own watch faces, and as of the time this was published, there were 342 designs outside of the included three for you to install.

Apps can also be installed, and already some smart cookies have come up with games such as Tetris, Asteroids, a tiny version of Pong, a calculator, timer, and metronome that you can use.

Seeing that you can turn your watch into a tiny game and app station is pretty impressive, but then changing your watch face with a simple push of an up or down button is very cool, too.

And seven days of battery life isn’t bad, either. We managed about a week after a full charge, though two of those days were spent disconnected from a smartphone while we reviewed another handset.

Basically, expect five days of constant use, and if you ditch the reminders, a full week.

Depending on the light, reading the watch can be difficult, especially in comparison to an analogue watch.

Looking at your watch can be strange, and thanks to the overly reflective watch glass, some situations make the LCD harder to read than you might expect.

While we hear that the screen is based on electronic paper technology, the normally light resistive technology doesn’t quite match an overly reflective screen, and depending on the type of light you have, your experience can range from fantastically readable to moving somewhere better than where you are.

Build quality is a mixed bag, though.

On the one hand, the plastic casing holding all the parts is solid, the cover glass looks quite resistant to scratches and knocks, and the overall wristwatch feels like it should last a few years, but then there are the tell-tale signs inside the watch.

This is the Bluetooth device selection screen, and yet the way we shot it, we can see odd oil-like marks under the screen.

Looking down at the screen in different types of light, you might see the glue mark under the LCD – or what we think are the glue marks – as they resemble oil slicks, and there is no way we’ve spilled anything remotely close to that on this watch.

It’s enough to make you worry that you have a defective product, but seems closer to a first generation flaw, and is something we truly hope is ironed out in subsequent generations of the Pebble Smartwatch.

The buttons can be hard to push at times too, often with delayed responses, but then bugs are the other flaw in the Pebble equation, with some of the lagged reactions in Pebble crashing the watch.

These crashes generally take between five and ten seconds to clear, and often just result in the watch resetting itself, but in other instances, you find the software renders all the text too small to read and you need to reset it, or the watch just becomes slow and unresponsive for a period.

Ultimately, Pebble is a new product, and with credit to the team working on it, patches and updates are rolled out regularly, meaning fixes for these issues can happen without you realising it, but until everything is ironed out, these are things to be aware of.

Technically, the Pebble is a limited release first-generation product, so while this is a review, it’s worth noting that you can’t actually go online and buy this device. Rather, the makers of Pebble used the crowdsourcing website Kickstarter to allow early investors to help them fund the exercise and subsequently purchase one of these early time keepers.

At the moment, the makers of Pebble are gearing up for a proper release of the product this year (from what we hear), and while we suspect there will be some changes, the device we’ve looked at probably won’t be too far off.

We’re looking forward to more features being unlocked by Pebble and other developers in the coming years, and our first glimpse of this was an app for Android that practically messaged us with every notification: weather, email, Gmail, Twitter, etc.

Other apps will communicate too, including golfing and fitness apps, and we’re particularly keen to see how the Pebble can become even more informative.

Still, it won’t be for everyone. Some people just want a watch to be a watch, and for those people, there’s always the option to have zero notifications on anything, and just a changing the look if they so choose, or not as the case may be.

For us, it’s a neat concept that shows what the future could hold, and we can’t wait to see what the second generation of Pebble has planned, and if it will be the start of the changing face of watches everywhere. 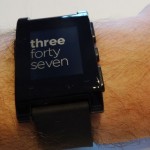 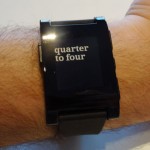 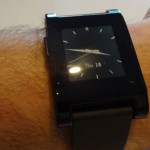 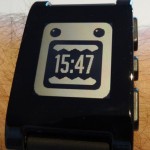 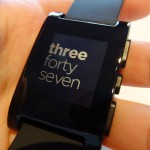 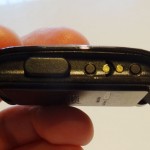 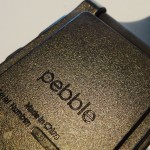 A black back with not much to it. 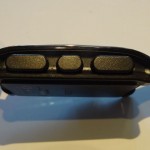 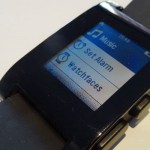 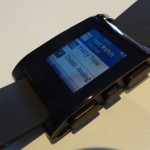 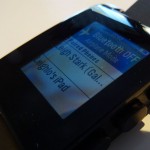 This is the Bluetooth device selection screen, and yet the way we shot it, we can see odd oil-like marks under the screen. 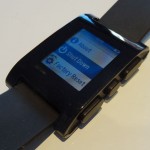 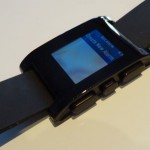 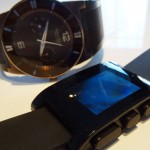 Depending on the light, reading the watch can be difficult, especially in comparison to an analogue watch. 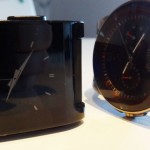 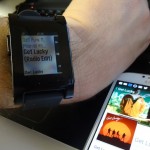 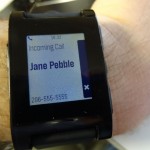 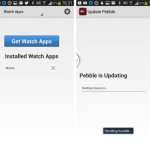 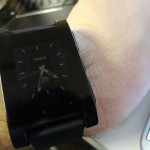 Times a-changin': Pebble reinvents the wristwatch
Price (RRP): $150 (when released) Manufacturer: Pebble Technology
Neat concept; A watch you can change the look of whenever it suits; Easily controlled by both iOS and Android; Works really well as a wireless music controller; Flight mode (by switching Bluetooth off) means you can use your computerised watch during flights;
Glue marks for the screen show up under different light sources and look like oil marks; Buggy; Buttons can be less responsive than you'd otherwise like;
Overall
Features
Performance
Ease of Use
Design
3.6Overall Score
Reader Rating 0 Votes
Share
Tweet
Share
Share
Tweet
Share

Magnetic phone cables could be a thing thanks to ASAP

There’s nowhere to run, as cats get their own GPS tracking collar

New gadget aims to make you aware of spiked drinks

Kickstarter project aims to cut the cost from sous vide