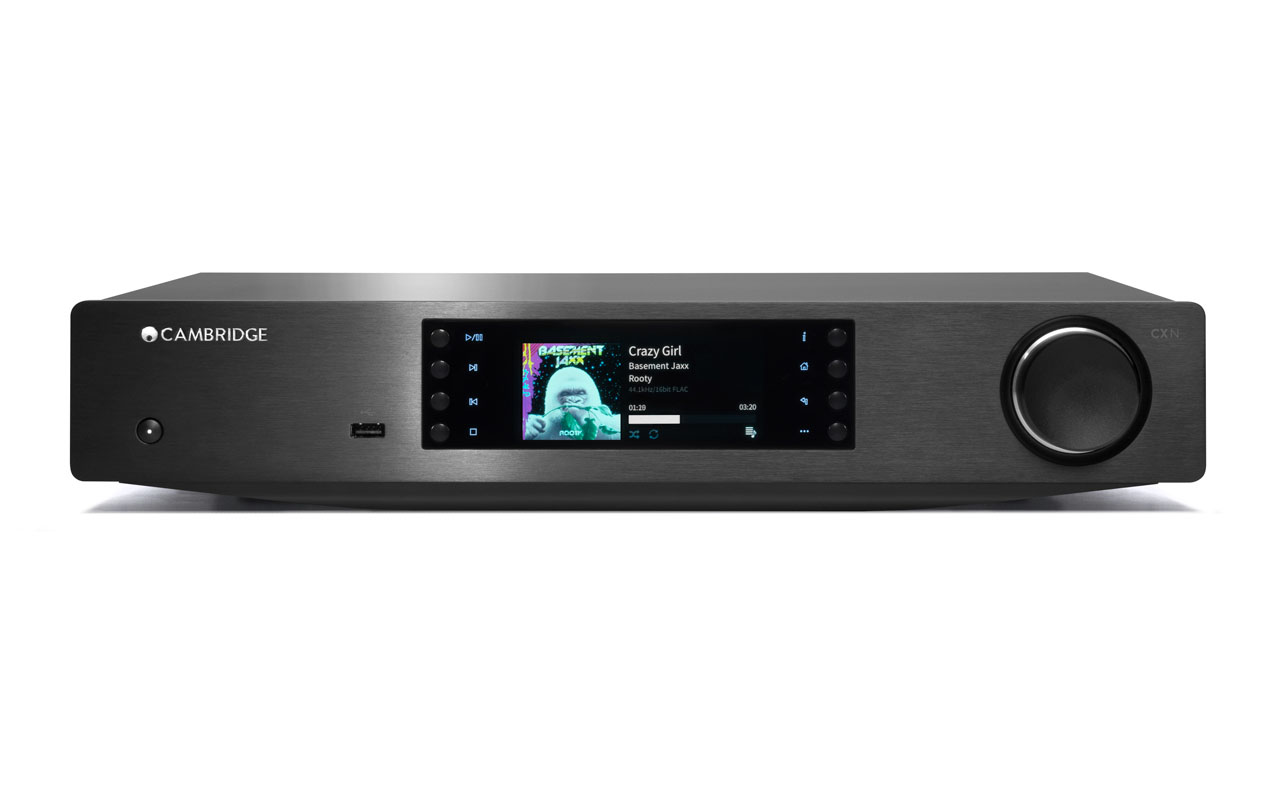 What’s a network audio player, and why would you want one? Let’s dive into one of the best on the market to see what it’s all about.

Cambridge Audio is a UK firm that over several decades has carved out a place for itself as a respected supplier of high quality, relatively affordable audio gear. You may think $1699 isn’t necessarily affordable, but for performance and features, the Cambridge Audio CXN V2 (for Version 2) pretty much matches the offerings from East Asia.

So, imagine you have a high quality stereo system, but one that isn’t up to date with network streaming. You plug in the Cambridge Audio CXN V2 and now it is up to day, providing very high quality sound and connectivity to a whole world of content.

This is a component sized device – the standard 430-ish millimetres wide. At its centre front is a colour LCD display for showing menus, album art and track information. A large knob on the right is primarily for control of this (and, as we’ll see, it can double as a volume control). Eight keys around the sides of the display select various functions, and do the usual play, pause, stop and track skipping.

It has standard and high end outputs. There are RCA sockets for the majority of installations, but balanced XLR sockets for some audiophile installations. There is also optical and coaxial digital audio output for use with external decoding  equipment, although given the dual Wolfson DAC chips used by the unit, that would seem to be overkill.

In addition to the network stuff, to which I’ll return shortly, there are also optical and coaxial digital audio inputs so the CXN V2 will also decode digital audio from the likes of CD players, digital TV receivers and even TVs. And unlike entry level digital network receivers, this unit has a USB Type-B socket so that you can plug it into a computer and use it as a high quality external digital to analogue converter. There is also a USB socket on the back and one on the front that you can use for connecting USB storage to play back music. Cambridge Audio is at pains to state that these “are not intended for connection to Apple mobile devices, no functionality, charging or otherwise is supported.” The rear USB socket can also be used for an optional Bluetooth dongle available from Cambridge Audio.

The main network connection is Ethernet, but there’s also an extra USB socket on the back which is intended solely for use with a WiFi dongle. And the dongle is included in the purchase price, so the unit is for all practical purposes WiFi enabled, with support for 2.4GHz 802.11b/g/n networks.

The network streaming functions are, as I write: Internet radio (using the vTuner system), Spotify Connect (you need a subscription), Apple AirPlay, and DLNA streaming (which is what’s supported by most Windows and Android devices). If you have music stored on your network, and you’re not an Apple household, DLNA is what you’re likely to be using. About the only major local streaming function not supported is Chromecast.

In addition, the higher quality Tidal streaming service is scheduled to become available via a firmware upgrade in the very near future. Again, you’ll need a subscription for that.

Just to be clear, if you have Tidal or Spotify on your iOS device, then you can just AirPlay the sound to the CXN V2. With a subscription, the device will be able to stream directly from Tidal for the highest quality.

If you like your equipment with a fulsome manual in the box, I guess this isn’t the one for you. It comes with a quick start guide, which is one sheet of glossy A3 paper covering not just this unit, but also the CD player and amplifier from the same range. And all it shows is wiring and, I kid you not, how to press the Standby/On button. Oh, and it recommends downloading the real manual from the Cambridge Audio website. (Turns out there are two of them, one of eight pages, one of eighteen.)

Fortunately, there are instructions provided on the front panel once you do press that Standby/On button. At least, instructions for setting up the network. Since I’d already plugged in the WiFi dongle, it went straight to WiFi setup. It gave the option of setting up WiFi the usual way, or via an iOS device. I chose the latter, followed the instructions, and the unit was connected to WiFi in, oh, about fifteen seconds. Whereupon it immediately wanted to download and install a firmware upgrade. Which I of course let it do. (I later had a look at the manual WiFi setup, which was straightforward, and could confirm that this unit is 2.4GHz only, since it didn’t see my 5GHz access point.)

Just about everything in consumer technology is a computer these days, and you have to keep your computers up to date.

I had also plugged my computer into the Type-B USB socket on the back of the unit so that I could use it as an external DAC. Initially I was surprised to find that it appeared to support high resolution audio only up to 96kHz sampling. Looking through the manual, I found that was because the unit defaults to the older form of USB digital audio: USB Audio Class 1. But you can switch it to the more recent form, USB Audio Class 2, in the setup menu. Class 1 works with virtually all operating systems, including older forms of Windows. Class 2 works with Macs and, since early last year, Windows 10. You can download drivers from Cambridge Audio for older versions of Windows.

As for other aspects of setup, the main menu is clear and easy to navigate. You just spin the large knob to move the highlight and press it to select something. There’s a back key and a home key so it’s easy to get out of trouble.

CXNv2 pops right up in AirPlay on iPhone 8

Finally, there’s a convenient function amongst the settings that switches between “source” mode and “preamplifier” mode. With the former setting, the analogue output level is fixed. You plug the unit into an amplifier and use it to set the level. But in “preamplifier” mode the large selection knob doubles as a volume control whenever something is playing. If you’re fiddling around with the menus, it still performs that function. In this mode you can use it with powered speakers and take full advantage of the remote control.

As mentioned, I used WiFi for main network connectivity. The first thing to note is that there was plenty of bandwidth to carry those high resolution audio files. They flowed smoothly, despite their nearly 6Mbps data rate.

That was the first marker of a welcome characteristic of the Cambridge Audio CXN V2: reliability. Everything worked with it.

I fired up the BubbleUPnP app on my Android phone – that’s a DLNA music controller – and found the CXNv2 listed straight away. I selected music from my NAS and sent it to the CXNv2, and beautiful music was instantly flowing from my speakers. The cover art was shown on the display along with track information.

I opened up iTunes on my Microsoft Surface Pro 4, selected the AirPlay icon and there was the CXNv2, waiting to receive music via AirPlay. I selected it, and a few seconds later music from iTunes was coming out of my speakers. And, yes, there was the cover art.

How about an iPhone? I swiped up from the bottom of the screen on an iPhone 8, tapped the AirPlay marker in the music player section and there was CXNv2 ready for AirPlay music from it. I sent it some Austin Benjamin Trio, and a second later, there was that group’s music emerging from the speakers, with the cover art displayed, of course, on the CXN’s display. The music emerged beautifully, I might add, with superb dynamism and precision.

Um, what else? Ah, Spotify. Yes. Same story. I tapped on “Devices Available” in the app, and there was CXNv2 available as a Spotify Connect speaker. Tap. Music. Cover art.

In all cases, you can press the “i” key on the front of the unit and cycle through the standard display with art and information, cover art only, and information only.

I imagine that Tidal will work as smoothly when it becomes available in coming weeks.

For my critical listening I went back to Cambridge Audio’s own Cambridge Connect app (on Android) to stream music from my NAS. This supported not just the usual formats, but also Direct Stream Digital (standard speed only) for those with such a collection. For some reason DSD streaming wouldn’t work with my usual BubbleUPnP controller. This sounded glorious across tracks, from ancient Beach Boys material to modern acoustic recordings. The only thing missing was the cover art, which showed up in neither the app nor on the device’s display when DSD format tracks were being played.

The Cambridge Audio CXN V2 Network Audio Player is one of the best of the breed. It will especially suit those already possessed of a high quality stereo audio system who want to get access to the wider world of Internet and network audio.

Polk preps a range of headphones, speakers with a page of history

B&O brings the Nordic Sky to a special edition speaker

Philips adds to your audio adoration with new auditory appliances