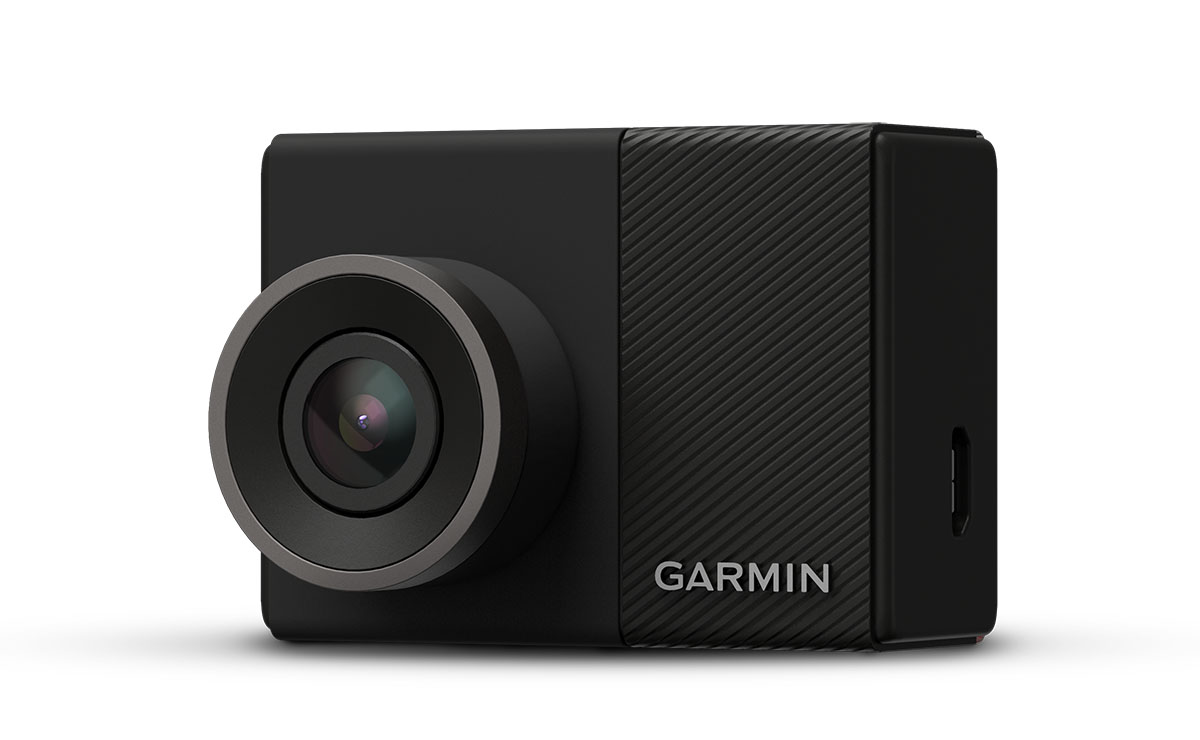 I like cheap equipment brands. One reason I like them is that they make devices, which might normally be financially out of reach, available to those with limited resources. Sure, they may not work quite as well, or be as well built. But often they’re ninety per cent of what you’re after for half the price.

The other reason is that they put downwards pricing pressure on the quality brands. There’s no doubt that Garmin is a quality brand, and to be able to get a highly functional 1080p dash cam from such a brand for $199 is a miracle of modern times.

Apart from that, they’re all pretty much the same with their features, starting with a tiny, tiny size. The Dash Cam 45 is only 56mm wide, 41mm tall and 35mm deep. It’s shaped like an old fashioned camera, but miniaturised. The main part is a rectangular prism, with a cylindrical section housing the lens poking out from the front. At the back is a 50mm colour screen. To the left (looking from the back) is a Micro-B USB port for power and communications with a computer. To the right are four control buttons for triggering recordings, controlling playback and adjusting settings.

At the bottom is a slot for a microSD card. A minimum speed rating of C10 is required, and cards of up to 64GB are supported. (Why 64GB? 32GB is the upper limit of the SDHC class, so 64GB cards are SDXC, as are 128GB and so on.) A microSD card is apparently supplied with the camera so no additional purchase is needed. It was missing from the review unit and I’ve been unable to find the size of the freebie.)

On the top is a clamp for the small ball on the end of the windscreen mount. The tightness of the clamp isn’t adjustable, but it holds tightly enough that the position of the camera is maintained well. Not least because the camera weighs only 60 grams.

A short arm from the ball leads to a magnetic mount. Normally that would attached to a coin sized metal disc which, itself, adheres to a windscreen. This disc wasn’t with the unit so I imagine it’s stuck on the glass of some other reviewer’s car. I used Blu Tack for my temporary installation. Not pretty, but it worked.

Other features: WiFi connectivity so you can use it with a Garmin app. The photos and videos are GPS-tagged. There’s a shock sensor so that if nasty things happen, the video leading up to it and shortly afterwards will be saved as an “Event”. The unit can give warnings if you’re departing your lane, or driving too close to the car in front of you.

You can reduce the standard 1080p30 resolution to 720p30 if you need to save space on your memory card. You can manually start recordings or take photos. And there’s a time lapse setting which takes periodic frames and pastes them together into a high speed recap of your journey.

The camera has a small battery built in with enough of a charge for 30 minutes operation. That allows it to do things like continue to record for a short while after power has been switched off (a useful feature in the event of a collision that interrupts the vehicle’s electrical system). There’s also a “parking mode monitor” feature, which allows the Dash Cam to start recording if motion is detected while the car is parked. But you’ll need a special cable, probably best installed professionally, to make use of that.

Using the unit was really quite easy. Indeed, you don’t actually need to do anything once you’ve installed it (also supplied is a lighter power adaptor and a long cable for power).

It is always recording (you can choose to have it record voice, too, if you want, or leave that switched off) and keeps the video in a folder of “unsaved” videos. Each is one minute in length. The oldest of these is over-written as additional space is required. How far back it will go depends on the size of the card. Each one minute video file was precisely 80MB in size, so I figure if you’re using a 64GB memory card, you ought to be able to fit perhaps a dozen hours on before the old stuff starts disappearing (depending on how many bits of video and photos you intentionally save.)

Field of view, GPS, time and speed at bottom left

You can play back anything that has been recorded, including “unsaved” videos, on the device’s own display. That display is good enough for … well, for making sure the camera is pointing in the right direction. It’s small and has a very restricted viewing angle. Any serious checking of videos or photos should be on your smart phone or a computer.

Getting material from the card is easy. Just plug the camera into your computer and it presents to the computer as a USB mass storage device. Go to the DCIM folder and everything’s there, organised in subfolders. Photos have a folder. “Unsaved” video has a folder. So does the time lapse stuff.

Speaking of which, using the time lapse feature does not interfere with any of the other functions. According to my calculations, it runs at about 73 times real time speed.

The photos were clear enough and, of course, had a resolution the same as the video: 1920 by 1080 pixels. By default (you can switch them off) the date and time along with GPS co-ordinates and your speed are impressed at the bottom right of the video. The video is MP4 format and playable on things like VLC, but you’d do best to download the free Garmin Dash Cam Player software because this can read the video and show locations on a map.

The time stamp is set by GPS broadcast. I was playing with the camera for a couple of hours in my metal-roofed office and the camera was showing a date and time in May this year. I put it in the car and went for a drive and after a couple of minutes the date suddenly flipped over to correct one, and the coordinates and speed, previously missing, suddenly appeared. Presumably that marked the point at which the Dash Cam 45 had acquired enough GPS signals to locate itself properly.

The lane warning tended to be overactive, although you can adjust the sensitivity. The too-close-to-the-car-in-front warning came on only when I was really close. I’d look at adjusting that as well, except it might result in too many false positives.

The Garmin VIRB app works by connecting directly to the camera, which looks like an access point. The camera provides a password on its screen so that randoms can’t connect. You can inspect and play back your photos and recordings.

In addition to that, it allows firmware updates. Indeed, it provided one to update from 2.70 to 2.90. That all seemed to be going smoothly, to the point where the camera rebooted and the app reported that it would be restarting. And then the camera sat there, interminably flashing its status light red while its screen remained black. After five or ten minutes, I thought I’d better start timing in case it did decide, eventually, to resume operations. After another forty minutes, I figured something must have gone wrong, so I pulled the power and then held down the unit’s on/off switch for several seconds until something happened. That something was the long awaited reboot, after which it resumed normal operation with the upgraded firmware in place. Really, that kind of thing ought to run more smoothly.

But that was one of only two wrinkles in a smooth performance. The other was it requiring acknowledgement of a safety message every time it started, which is to say nearly every time the car was started. I couldn’t find a way to switch that off.

That apart, the Garmin Dash Cam 45 is a well designed, effective and inconspicuous recorder of your travels, and potential safety device.

Laser releases half a dozen crash-cams covering all price points