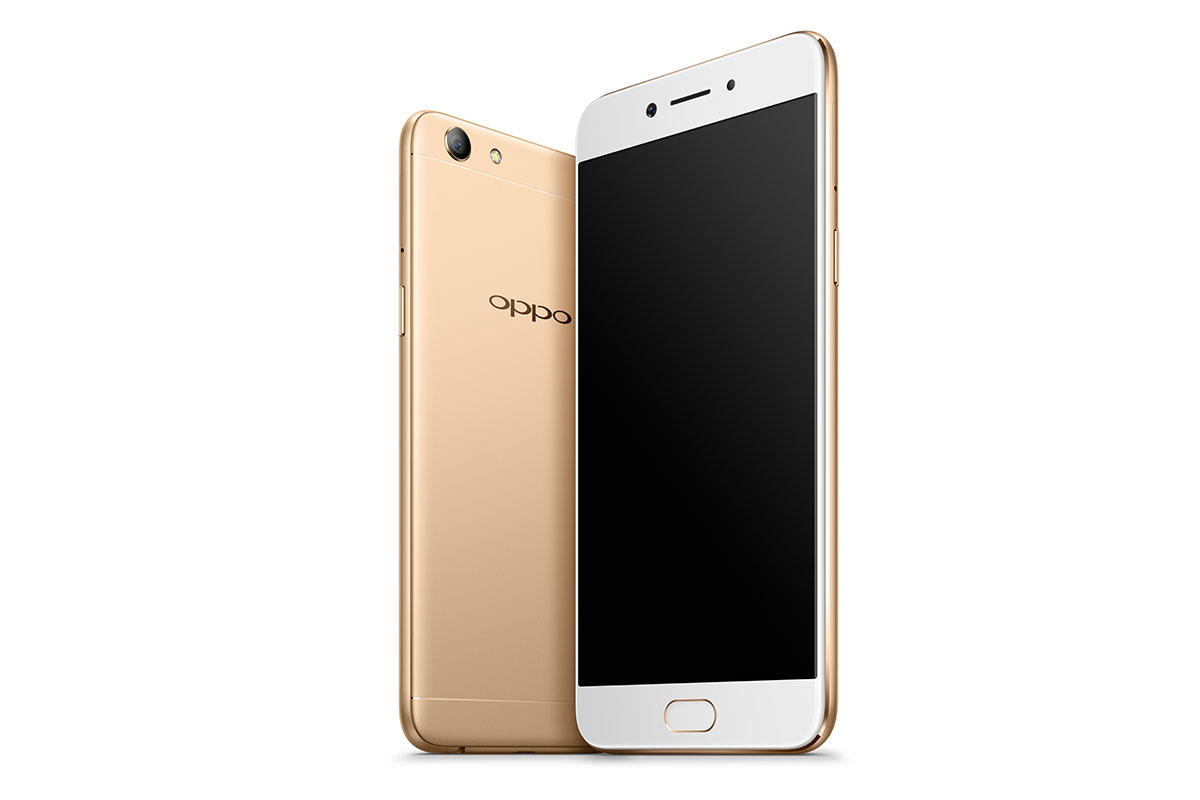 Oppo keeps on pumping out those smart phones, concentrating mostly in two segments. One is the higher end, but lowish cost area. The other is far closer to entry level, with models that really look much more expensive than they actually are. See, for example, the $328 Oppo A57.

The biggest difference is that A77 bumps up the display size and resolution. It’s a full HD – 1080 by 1920 pixel – model, with 5.5 inches for a decent amount of screen real estate. But lots of other stuff is different too, including the CPU and the construction.

Indeed, this phone features a metal body. The review unit was finished in an attractive gold-look back, with a white front. Styling was clearly modelled on the iPhone. It’s also available in black. The screen uses Corning Gorilla Glass 5, so the whole thing ought to be fairly robust. It comes with a thin, transparent back-and-sides case. It also comes with a screen protector in place. Oppo doesn’t claim any waterproofing, so be safe: don’t mix with water.

The processor is a Mediatek MT6750T system on a chip. Released last year, this has four 1.5GHz cores and four 1.0GHz cores. It’s a 64 bit chip and supports the usual communications standards, up to Cat 6 LTE (Oppo claims speeds of up to 150Mbps with data downloads, although Cat 6 LTE actually supports up to 300Mbps). There’s 4GB of RAM.

The phone has room for two SIMs, plus a microSD card of up to 128GB. And yes, this is not an either/or case. You can have two SIMs and the memory installed all at the same time.

The phone use a 3200mAh battery, but it lacks the VOOC fast charge system available with Oppo’s more expensive models. The charge and communications port is Micro-B USB. The WiFi is dual band with support for 802.11a/b/g/n, but not ac.

The user interface is Oppo’s ColorOS 3.0 and it overlays Android 6.0. The soft back and apps keys don’t use up screen space. They are on the body to either side of the combo fingerprint scanner and home key. That key in turn doesn’t move. Like the one on a current iPhone, it looks like a mechanical key but is actually just a soft one. It vibrates briefly when touched so that you know it has worked. The back and apps keys are the Samsung way around rather than the standard Android way. That is, apps to the left, back to the right. I like it that way, but I’m a righty.

The rear camera is a 13 megapixel f/2.2 unit, while the front has 16 megapixels and a maximum aperture of f/2.0. As usual, Oppo is pushing the camera somewhat as ideal for selfies.

There’s no NFC with this phone,  so transferring from an old one took a step or two more than just touching phone backs. Nonetheless, a wizard guided me through the process, and within thirty seconds my Google credentials had been transferred. Then a quick check revealed that a system update was available, so I set that going. It takes a little while to get a 123MB update downloaded. Quite a short “little while”. Say, about as long as taken by me to write this paragraph.

While my Google ID went through okay, the phone did not seek to find and install the apps I use, so had to go to the Play Store and add the important ones myself.

Take your time, and you can get quite a nice photo

Also, part of the setup was teaching it my fingerprint. It only wanted one at this point, without an option for more. I had to add more later through “Settings”. There wasn’t an option for associating particular fingers with particular actions on apps.

While on the things that I don’t like, it’s mostly aspects of the user interface. For example, you can’t use a PIN for unlocking. It’s pattern or fingerprint. The notifications and shortcuts are on separate screens, so you need two swipes to get to the shortcuts.

And you can’t edit the shortcuts, which meant in my case I couldn’t get ready access to a couple of things I like. For example, there’s no shortcut for making the phone a WiFi access point. As we’ll see, it performs that function very well, but to get to it you have to go to Settings, Other Wireless Connections, Personal Hotspot. If you’re planning on using the personal hotspot, do change the password. It defaults to something like 12345678. Not good.

Likewise, the phone does a nice job of casting its screen. It worked fine with the Microsoft Wireless Display Adaptor, and with an Android-powered projector I happened to have around. But to do it, no simple swipe and touch. It was Settings, Other Wireless Connections, Wireless Display. You get used to these things, but they seem so unnecessary since a bog-standard Android implementation makes things easier.

Finally, my regular Oppo whinge: why does the On the Go connection switch off after ten minutes of non-use? To get it going again needs another deep dive into the menu system.

In everyday use as a phone, device to access the Internet, run everyday apps and all the usual stuff, this was a fun, fine phone. The screen was clear and bright. Indeed, I took a bunch of photos, repeating with a Samsung Galaxy S7 for comparison, and for all those out in daylight, the screen on the Oppo A77 was clear and easy to see for framing, while the S7’s was washed out and difficult to frame.

I thought that with Android 6.0 it might be a bit limited compared to Android 7, but around the time – less than a fortnight ago – I was celebrating the S7 finally receiving the upgrade from Google Now to Google Assistant, I noticed that the Oppo A77 was also using Google Assistant.

And it, of course, worked very well. The A77 has quite sufficient grunt to run that.

The Basemark OS II benchmark gave the phone a score of 1010, which is a bit higher than the 943 of the Oppo A57, and a bit lower than the 1094 of the Moto G5 Plus. Its bigger weakness seemed to be with the Basemark OS X gaming benchmark. The graphics in that were rich and detailed, but the animation was slow – I’d say around 12 frames per second – allowing a clear judder to show. On that test this phone scored 12955, well below that of the 15523 of the A57 (I’d say the lower resolution of the A57’s screen gave it a boost there – much less data to manipulate) and even further below the 21390 of the Moto G5 Plus.

Panoramas are around 270 degrees

Perhaps not the best choice if graphics rich gaming is your main interest.

I was doing a little bit of travelling while using the phone, and so using it to hook my computer into the Internet. My wife was getting low on data, so her phone was using it as well. It gave me a very nice 44Mbps download using an Optus SIM. But there were a couple of presets that needed fixing. Specifically, the downloads of my podcasts just stopped, mid-podcast, as the phone issued a warning that it had gone past a pre-set limit. I think it was of 500MB for a day. The notification took me to the SIM settings where I could bump up the “Daily Data Reminder”. Up to 5000MB maximum. There is no option to switch it off. I got another interruption around the same time, this time for monthly usage.

The main camera did an average job. There were some shots I took for comparison which came out close enough to the same quality as the Samsung Galaxy S7. But in general they were a little softer, a little less detailed. The main thing seemed to be the need to take your time and make sure you’ve selected your focus point.

Could do with pushing the brightness: Oppo A77 left, Samsung Galaxy S7 right

The “Beauty” mode seems to do a good job of identifying your face, and there iy pretties you up just a little. It softens contrast a touch so any bumps seem less prominent, and filters out some fine detail (I ended up with less stubble and almost no skin pores).

The Panorama mode adopts the modern rotate smoothly model. It covers about 270 degrees. The resulting photos were surprisingly small – between 5 and 10MB in size – I managed to get one up to 9MB –even though they were more than 12,000 pixels wide and around 3000 pixels tall. They were also a touch soft. Checking them at full resolution, I suspect there was a bit too much too much JPEG compression. Stitching was sometimes a bit iffy too, with one of them leaving the bottom one fifth corrupt and some rather wonky joining on things like power lines.

The Oppo A77 is a respectable low-to-mid-priced phone, generally with performance that fits about right in that range. What lifts it is the much richer appearance and build. And the rare ability to accommodate two SIMs plus a microSD card.