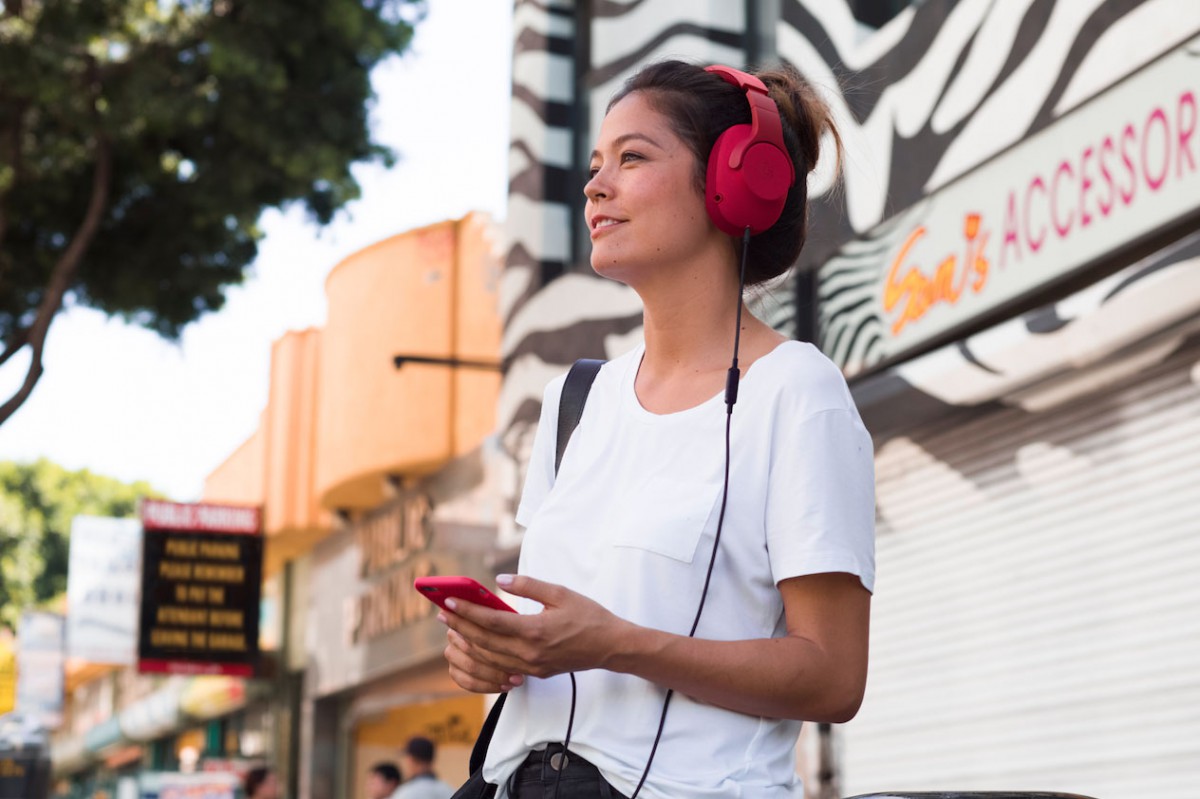 There are peculiar requirements for gaming headsets. Sound clarity, even high fidelity performance, is of course a plus. But they also need a microphone for communicating with your team mates, and perhaps enemies, and above all you need comfort. You’re going to have those things on for hours, and having flattened ears is not a pleasant experience.

That’s one of the things Logitech set itself to addressing with the G433 Surround Gaming Headset. The other: versatility. It is also touting the G433 as a fine way of listening to music when you’re on the move.

A gaming headset consists not just of headphones, but also of a microphone. On a stalk. Poised near your mouth. Being out in public with such might seem a little … odd. No worries: the microphone stalk simply plugs into the headset, so it’s easily removable. Do that, and they look like standard sports-style headphones. Albeit, boldly and colourfully styled ones. They are available in a fabric finish – “hydrophobic, stain-resistant” says Logitech – available in Royal Blue, Fire Red and Triple Black.

Logitech has put a lot of thought into the G433 Surround Gaming Headset, including into making them and keeping them comfortable. They are over ear models to start with. On ear headphones necessarily press down on your ears. Over ears surround them, with the cushions pressing against your head around the outsides of your ears.

Since Logitech anticipates – encourages, even – the use of the headphones out and about, it has made the pads removable and washable. And it packs in a spare pair so you can switch over while one pair is being cleaned.

One of the cables – finished in a smooth rubber or plastic, has an inline microphone in a pod near the headphone end, along with a push button switch which acts as play, pause, call answer and so on. This cable is intended for use as an analogue connection to your phone or music player and it permits hands free calling.

The other cable has a cloth weave finish, but similar plugs on either end. It also has a small pod near the headphone end, but this one doesn’t have the inline microphone. Instead it has a volume control and a mute switch. This one is intended to plug into the small USB digital to analogue converter that is provided with the headphones. This is one of the main connections you’re likely to use with most computers. You plug the DAC into a USB socket on your computer, and the headphone’s cable into the DAC. It works both ways: providing sound from the computer to the headphones, and digitising sound from the microphone and providing it to the computer.

Also provided is a splitter cable which separates the headphone and microphone audio for two separate analogue connections. That can be useful if you have a sound card you prefer to use, but then you won’t be able to use the Logitech Gaming Software for it won’t know that the headphones are plugged in. And that will also mean that the audio can never be more than two channels. I’ll get to that.

Finally, in addition to all the other bits, the headphones are supplied with a soft pouch.

The physical design – giving plenty of space around the ears, really paid off. These Logitech headphones didn’t put any pressure on or scrunch up my ears at all. Indeed, there was so much space that I usually had to nudge them around a little whenever I donned them to make sure that the drivers over each ear were in the same respective position, otherwise they sounded slightly unbalanced.

Neither was the pressure on my head around the ears excessive. Yet is was just enough, combined with the friction of the ear pad fabric against skin, to hold them firmly in place even when I was walking. Being closed back, they also tended to keep external sounds out, although they weren’t quite as isolating as some closed back designs. Which is just as well when you’re out in the world. Trucks and other hazards, you know.

Initially there was a bit of breath noise feeding back into the headphones. I soon worked out that the Logitech Gaming Software control panel had a slider called “Sidetone” which adjusts this. To really get full value from the headphones you should install the software. It looks after things like EQ and surround sound. To which I’ll return shortly.

The sound quality of the headphones in their default state – the sound unprocessed by the Gaming Software – is really rather good. Of a level I’d be happy with were these nothing but headphones selling for $170. My $700-ish headphones provide a touch more detail and a slightly greater sense of air in music. But the workmanlike performance of these does deliver an extended frequency range, with a balanced and well extended bass in particular, and excellent coherence.

For computer use you may want to use the Surround Sound mode made available by the Gaming Software, not just for games and surround sound movies, but also for stereo music. The Surround mode uses the DTS Headphone X processing system to make the two drivers in a set of headphones sound like a whole bunch of them scattered around the room. When stereo music is playing, you can choose “Super Stereo Front” or “Super Stereo Wide” modes. These process the sound so that it sounds less like it’s being fed from close range directly into your ears, and more like it’s coming from in front of you from a set of speakers. The result was pretty impressive, and I opted to use it most of the time.

As for actual surround sound, I tested this with a Dolby Digital 5.1 audio track, played on my computer using PowerDVD. PowerDVD reported that it was feeding eight channel PCM sound to the DAC, so that meant it was able to properly decode the surround sound and deliver the discrete channels to the DAC, rather than the Logitech software having to re-decode from a two channel mix-down.

But even so, the software does have to make two speakers fake multiple speakers. It did a surprisingly good job of suggesting sound coming from all points of the compass, including sounds that were orbiting the listener’s position.

One last thing: the DAC does not detect what headphones are plugged into it. So if you like, you can use the DAC and the Logitech software with a different set of headphones.

While I mostly used the headphones with their own DAC and my computer, I also used the system with a variety of portable devices. With an iPod Nano and my Android phone, using the analogue connection, both the earphones and the microphone worked nicely. The in-line remote paused, answered calls, fast forwarded (double tap and hold) and so in the conventional manner. Recording software on the phone and the voice recorder on the Nano both worked with the boom microphone. There didn’t seem to be any doubling up or echo, so I guess if the microphone is plugged in, the inline mic is taken off line.

I also plugged the headphone’s DAC into an iPad Mini 4 – current model running iOS 11, so it ought to work the same with any iPhone lacking an analogue headphone connection. I used a USB to Lightning adaptor, and the iPad was perfectly happy to play music that way. Also, it would record sound when the microphone was plugged in.

Likewise, I could listen and record using the DAC plugged into a USB adaptor with two different Android phones.

Logitech has set the levels of the microphone pre-amp to make it very difficult to push the system into clipping (excessive distortion due to running out of digital bits). Clapping loudly into the microphone with the recording volume set to maximum produced peaks of, at most, barely more than -3dB.

Windows reports that the headphone DAC supports digital audio signals from 8kHz to 48kHz sampling at 16 bits maximum. In other words, it isn’t suitable for high resolution audio if you’re into that kind of thing.

The Logitech G433 Surround Gaming Headset achieves the various aims Logitech had: it provides very good sound quality, is practical, can be used out and about and even does a respectable job on surround sound. All at a very good price.