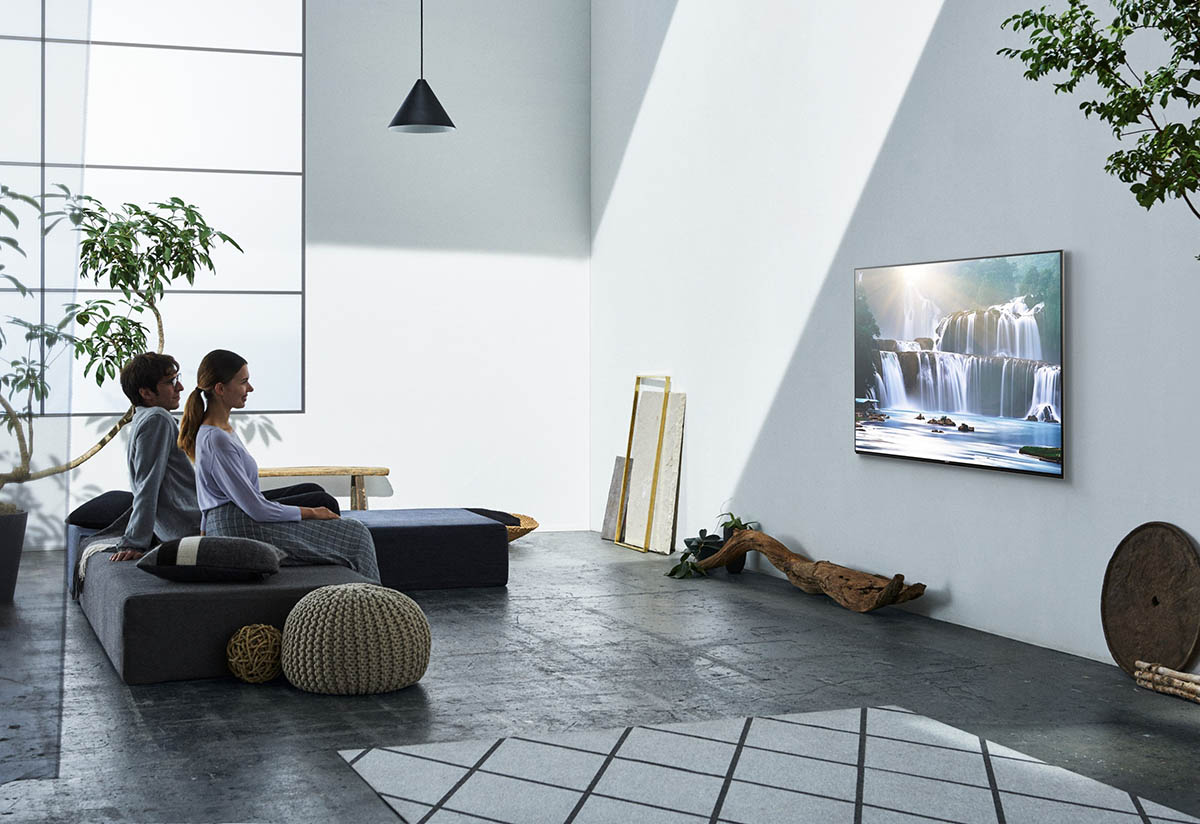 It’s not quite OLED, but sixty five inches of Sony screen technology, backed with Android smarts, makes for a yummy TV.

And a big, heavy TV it turns out. The Sony Bravia KD-65X9300E is the company’s top of the line model. Well, it was until Sony OLED was launched the other day. It is well built, offers UltraHD resolution and looks very stylish.

Well built could be considered code for “heavy”. These days most 65 inch UltraHD TVs have a weight in the high 20s of kilograms. This one weighs 38 kilograms, and that’s without a stand which adds another four. You may need help with installation.

Especially if you make use of the wall mount, which is provided as standard with the TV. This is a swivel mount, so it provides a great deal more flexibility than most.

The TV comes considerably more securely packed, too, than most, with cardboard wraps reinforcing the normal polystyrene cutouts.

As you might guess from the weight, Sony hasn’t gone for the thinnest of panels. It’s 39mm thick at the thickest, narrowing down to around 15mm near the edges. The front panel glass extends almost completely to the extremes of the TV panel, with only a thin (and dark, so you can’t really see it) metal strip around the edge. The picture itself reaches to less than 12mm from the edge of the TV at the top and both sides.

The stand is solid. The back of the TV is covered with a nicely textured, light grey coloured plastic. It’s so nicely done I had trouble finding the inputs (they were under well fitted panels). The stand also manages cables, so that you just can’t see them from the front.

The full range of inputs are provided, including support for older analogue ones. The TV can connect to your network via Ethernet (100Mbps top speed rather that gigabit, unfortunately) or WiFi (up to 802.11ac).

If I read the specifications correctly, the left and right channels each have a tweeter, midrange and woofer, and each driver has ten watts of power available. When you set up the TV you’re asked where the TV is to be placed – wall or stand – so as to tailor the sound appropriately.

It’s over a year since I last used an Android-based TV (it was from Sony of course), and I don’t recall it providing this feature as part of the setup wizard: it asked whether I had an Android phone or tablet and whether I wanted to use it with the TV. I agreed that I did, and it talked me through connecting them, transferring my Google credentials to the TV in almost the same way as if it were a smart phone. Very nice.

I’d connected via Ethernet so of course the phone and TV could talk to each other with no network setup. So I later performed a factory reset and re-did the setup without Ethernet. The process was the same, except that the TV also connected to the WiFi network with no need for tying in of a network password.

The TV has 8GB of storage built in. You can add pretty much as much additional storage as you’d like using the USB sockets. One of them – with USB 3.0 support – is intended for a larger drive to pause and time shift live TV.

At that point you can also authorise the use of the Android TV app on your phone to control the TV wirelessly. This is a pretty basic control app that works in two modes: arrow and select, or the touchpad swipe and select. It also allows the use of the voice recognition feature – which is also available on the standard remote. Android voice recognition works very accurately. You can use it for search terms, or such things as “change to channel two zero” or “change to input hdmi 3”. Reliable, indeed, but rather slow. Expect two or three seconds for these kinds of commands to be acted upon.

There are lots of apps built in, or available for installation from a cut-down, curated version of the Google Play Store. The ones I used worked as well as you’d expect, which is extremely well. Android is now a very mature operating system. Many of its apps are also mature: well developed and smooth in operation. And then Sony has selected only apps which are going to work well with the TV.

I had started, for example, to use Netflix on a rather cranky external media device and was becoming frustrated with it. So I switched over to the TV. I switched on the CEC and ARC facilities in my home theatre receiver – Consumer Electronics Control and Audio Return Channel – and these allowed the TV to send the audio back down the HDMI cable to the receiver, so I could get the best quality sound.

Netflix worked like a dream. I could check out the streaming speed and use the audio stream changes and so on, while getting higher quality sound than the TV’s own speakers could deliver (they were pretty good for TV speakers, bold and clear, with a hint of bass).

The TV also acts as a Chromecast device, and also supports Digital Living Network Alliance connectivity. So – Apple stuff aside – it will sit comfortably in any network control and streaming environment you have. I used a third party app to send images and video to it via Google Cast, and I could send it web pages since I normally use the Chrome browser anyway.

If you’re using UltraHD or higher resolution content, I’d suggest you use DLNA rather than Chromecast if your devices support it. Everything bottlenecked down to full HD when delivered from the network via Google Cast to full HD, which meant reduced resolution on photos and UHD video.

(High Geek paragraph, beware!) DLNA supported full UltraHD picture resolution but, unlike most premium big brand TVs, didn’t provide full 4:4:4 colour resolution. Instead only 4:4:0 was on offer, meaning that only every second horizontal line could be guaranteed to be displaying the full colour (the in-between ones showing the colour from the line above). In practice, the resolution was so high it would take a very sharp eye indeed to spot the difference.

I would have liked faster Ethernet. The 100Mbps connection was fast enough to stream most of my 4K clips without interruption, but my test 100Mbps was, not surprisingly, pausing every few seconds to slurp some more data into its buffer.

I tried out WiFi instead, and sometimes that runs faster. Even though the TV is rated at 802.11ac connections, it was actually quite a bit slower in my office if frequently pausing 4K video streams were anything to judge by.

I tend to do my critical watching in the night time, room lights out. That makes it hard on non-OLED TVs in their quest to reproduce good black levels. Initially I was impressed with the TV. Very dark blacks. But the whole picture tended to be a bit less bright than the level to make me entirely satisfied. I explored the picture settings and found that the TV was monitoring ambient light levels and adjusting its brightness accordingly: turning it down when the room was darker, up when it was brighter. That can be a good scheme, but it seemed a bit too aggressive in turning things down in a dark room.

I could get used to it if I allowed my eyes to adjust over a reasonable period, but in fact I preferred to have the auto light adjustments off and let the panel shine, so to speak. That did mean that the black levels were not as deep as otherwise. Indeed, they were a little uneven, producing a slightly mottled look on a couple of near black scenes, as is to be expected with edge lit LED/LCD TVs.

Sony packs some of the best picture processing in the business into its TVs. I have a preference for what you might call “transparency”, in which you see pretty much only what’s contained in the original signal, warts and all. But I have to admit I was tempted to leave this TV’s default settings in place. They sharpened up the image very nicely, and cleaned it up. It did perhaps the best job I’ve seen of making 720p Netflix look like Blu-ray quality, with smooth and noise free graphics (when I was watching Rick and Morty), and natural movie-style live action (on Broadchurch). And at its best, HDTV could be lifted to verging on the look of UltraHD.

All that made for very fine viewing. Even more so was UltraHD Blu-ray. I watched a variety of material and it all looked very fine indeed. Sharp and detailed and bold in colour, with excellent brightness.

At one point I tried out an UltraHD video test pattern designed to show every pixel of resolution. This was clearly shown with some heavy duty picture processing which made quite the mess of the picture. After fiddling around for a while, I eventually worked out that the problem was the “Sharpness” setting, which I had wound down significantly, as is my practice. That has, in my opinion, positive effects on picture accuracy with HD and even SD material, but it seemed to do damage to the picture with UHD material. So best to leave it on its default setting of “60” for UHD playback.

The Sony Bravia KD-65X9300E is a fine UltraHD smart TV with amongst the best picture processing presently available, and mature smart features provided through Android.

Finally, one extra little kudos to Sony. Smart TVs are multipurpose devices that do all manner of wonderful things. But they are still TVs. I get a bit sick of having to search around a on screen menus to make a TV show regular broadcast TV. This one has a remote with a nice, convenient “TV” button on it. Point and hit the button, and you go back to what TV used to be.

Review: Sony A8F OLED TV is as good as it gets (review)