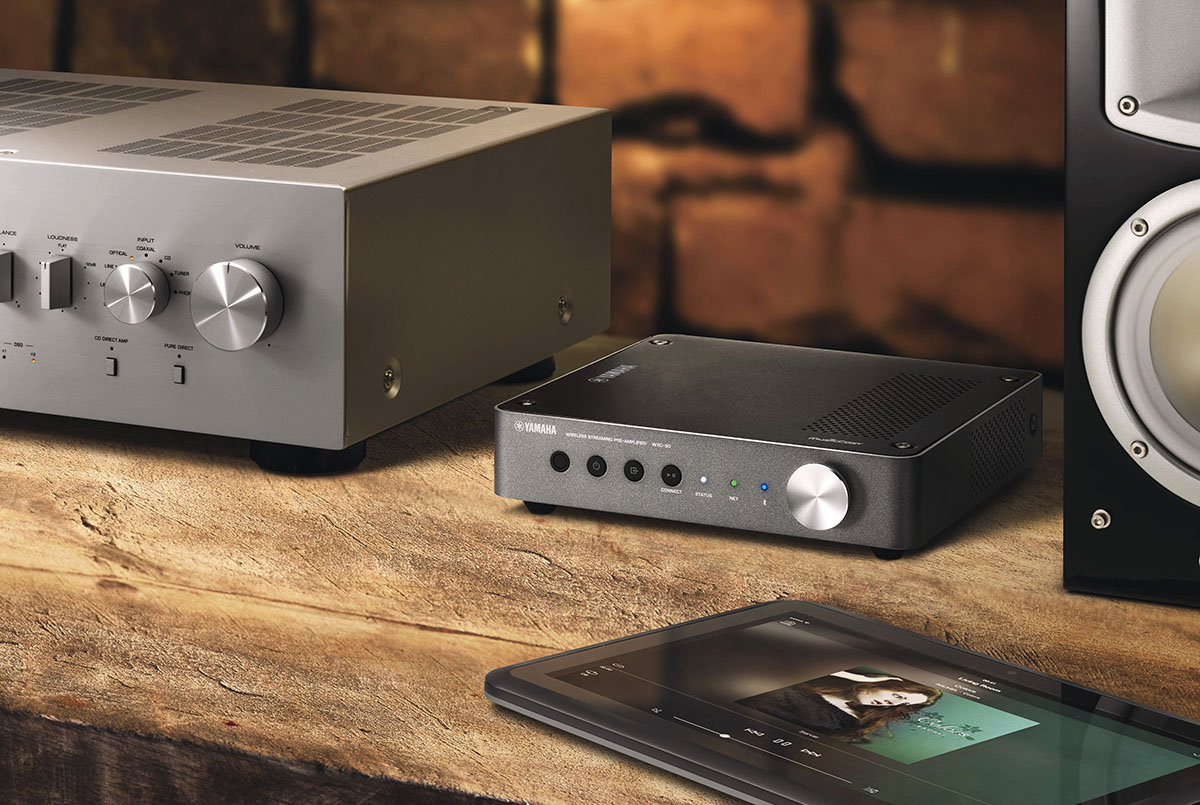 Multiroom audio is all over the place now, but the company to come up with the best name was also the first: Yamaha. It called and calls its system “MusicCast”, and first launched it way back in 2003, a year before there was even a Sonos prototype.

But the stuff was expensive ($4.5K for a server, $1950 for a client) and wireless networking was not very capable. In those days, the WiFi standard of 802.11b could manage less than 6Mbps. Yamaha discontinued its efforts after a couple of years, but come roaring back in 2015 with the same name and a great new system.

… and, the Yamaha WXA-50 wireless streaming amplifier, and the WXC-50 Wireless Streaming Pre-amplifier. These are compact, high quality audio devices in which MusicCast not just supported, but is central to their mission.

In most ways, these two devices are identical. The one difference is that the WXC-50 lacks the stereo power amplifier built into the WXA-50. So I’ll talk mostly about the amplifier – the WXA-50 – and note the differences with the pre-amplifier when relevant.

The WXA-50 is a network-capable stereo amplifier. It has an Ethernet connection, and built in WiFi. These days the support is for 802.11b/g/n, which means a theoretical throughput of up to 600Mbps, or a hundred times what was available back in 2003. It also has an optical digital audio input (very useful for TVs) and a stereo analogue input. It also has stereo analogue outputs, in case you want to pipe the sound out to an external amplifier for higher performance. There’s also a subwoofer socket for an active sub. There’s a USB socket so you can plug in mass storage devices for playback, and the unit supports Bluetooth as well.

It has big, high capacity speaker terminals, which are powered by a 55 watt per channel amplifier. That’s 55 real watts, not one of those made up figures often seen with lesser equipment. It’s also rated to work properly with low impedance – four ohm – loudspeakers.

The WXC-50 is pretty much the same, except for skipping the amplifiers. Instead of the speaker terminals it has an extra pair of analogue outputs, an optical digital output and a coaxial digital output. There’s also a switch that selects its mode of operation. With the switch in one position, the volume control on the WXC-50 will set the output level. That’s the setting you’d use if you’re plugging it into powered speakers or a power amplifier of some kind. The other fixes the output at full blast. That’s for use with a regular amplifier, when you’ll be using that amp’s volume control to set the level.

A tiny remote control comes with each unit.

I set up the Yamaha WXA-50 with a WiFi connection to my network, and just plugged the WXC-50 in via Ethernet to see what difference it made. There wasn’t that much. To connect the WXA-50, once it was powered up, just involved using the MusicCast Controller app on my phone. It rapidly found the device, asked for me to choose the WiFi connection point and provide a password, and then the connection was made. When I plugged the other one into Ethernet, it appeared in the app instantly with no further setting up required.

The amp needed to have its firmware upgraded, the app informed me, and it handled the process in about ten minutes. The pre-amp was already up to date.

For the heck of it, I also connected in Yamaha’s top of the line Aventage RX-A3070 home theatre receiver.

As part of setting up, you give a name to the whole group, and then to each device within it. Each device will typically be named after the room it’s in. In addition, you can take a photo to associate with the device. Again, typically, you’ll grab a photo of the room. I grabbed a photo of each device instead. These show up in the app.

You can also link two or more MusicCast devices into a group, or multiple devices into multiple groups, and send music to groups rather than individual devices. I found that you can easily switch control devices. I flipped promiscuously from Samsung Galaxy Tab A to iPad Mini 4 to iPhone 8 to Google Pixel 2 XL as controller, and all linkages and streams were shown on them as though they were on the same device (although the tablets provided a more spacious layout).

One other thing, the network connection remains active even while the units are in standby mode, so you can switch them on again via the app, or just send music to them to switch them on.

So, yes, you can plug in optical or USB or analogue source devices, or connect your phone via Bluetooth. But the main game with these units is streaming network audio. So let’s see what they – what Yamaha MusicCast – supports.

Not supported is Chromecast Audio. If you need it, just plug a Chromecast audio device into the optical or analogue input and that lack is sorted.

Finally, all the other inputs will share music to any other MusicCast device which is linked to the one whose input you’ve selected.

So, what formats of music can these MusicCast Devices play from your network? Chances are, pretty much everything you have. I played FLAC (Free Lossless Audio Coding) music through these units, in standard CD resolution and also high resolution up to 192kHz sampling. I played MP3 and iTunes-style AAC. I even played Direct Stream Digital – the Sony format developed for the Super Audio CD – in both regular and double speed (5.6MHz) versions. Plus Apple’s own Apple Lossless format (ALAC). The instructions add that the units will also play WMA, WAV and AIFF.

MusicCast app playing a FLAC file from a server

It also supports gapless playback. A lot of devices insert a small amount of space between tracks, perhaps only the briefest of pauses, perhaps a second or two. That can be quite irritating with run-on tracks, especially with live recordings. Gapless provides a seamless transfer from one to the next.

According to the manual, it’s gapless for WAV, FLAC, AIFF and ALAC, but not necessarily for the others. Nonetheless, in addition to FLAC it seemed to provide gapless playback for at least MP3.

Both devices did a fine job of decoding all formats. I used a pair of $2500-ish loudspeakers with the WMA-50, and it sounded just as a high fidelity amplifier should. It exercised great control over the speakers, making the system completely transparent to the sound. If you’re thinking of going to wireless streaming from an older system, while retaining its loudspeakers, you’re unlikely to be disappointed by the sound. Sound from the WMC-50 is entirely dependent on the audio system into which it’s plugged, of course, but should you use a high quality system, the sound will be first class.

There are a plethora of multiroom streaming systems around. If you are already partway committed to one and happy with it so far, you’ll probably not want to change. But if you’re starting from scratch, I have to say that the Yamaha MusicCast system my favourite. As I’ve tried it several times over the last few years, it has always proved easy to use and utterly reliable. It has the full range of features. And, most importantly, it has devices that will provide just about any level of quality, or mode of operation, that you might need.