Despite what Apple originally expected, the 7 to 8 inch tablet space is really heating up, grabbing attention from consumers because of how easy it is to carry these mobile computers.

Samsung has actually been in this space longer than most, and in the Galaxy Note 8, it’s almost like a marriage of the best of what Samsung has to offer right now.

The latest entrant in Samsung’s Galaxy Note series of devices, the Note 8 adds a small tablet to a line-up that until this time has been made up of a big phone and a 10 inch tablet, with nothing in between.

For many of us, there isn’t a need to have a big phone, even if we really wanted to grab what many see as the future of note-taking, with a tablet that doesn’t just feature a stylus, but also finds a way to make it useful.

That’s where the Note 8 comes in, providing the middle ground with a sizable tablet with an 8 inch screen that makes it possible for a tablet to fit into most small bags. The resolution for the screen is the typical 1280×800 Android tablets have generally been supporting for well over a year now, with a pixel density just shy of 189 pixels per inch.

Inside the tablet is a quad-core processor clocked at 1.6GHz, 2GB RAM, 16GB storage, and Android 4.1.2 “Jelly Bean,” not the latest version but close to it.

A microSD slot is included too, in case 16GB isn’t enough and you need or want more storage.

Because the Galaxy Note 8 tablet has been designed from a shadow of its smartphone siblings, there are similarities in the hardware, such as the connectivity, which supports 802.11 a/b/g/n WiFi, DLNA, Bluetooth 4.0, GPS, and a microUSB port for charging and moving data to and from. Interestingly, Near-Field Communication (NFC) is missing from the equation.

Cameras are typically part of both the smartphone and tablet equation now, and that’s no different here, with a 5 megapixel rear camera without the flash, while a 1.3 megapixel sits up front for video conferencing and self-portraits.

Design of this tablet borrows heavily from the current Galaxy and Galaxy Note models which are built entirely in plastic and support one main physical home button at the bottom, while the typical two Samsung soft buttons — menu and back — are printed on the frame flanking either side of that home button.

The remaining hardware buttons are the power and volume rocker, which sit on the right edge, just above the infrared port.

Two speakers sit on the bottom, with a slot for the Galaxy Pen on the right corner, while the left edge sports the microSD slot and the top features the 3.5mm headset port.

Unlike Samsung’s smartphones, the back of this tablet cannot be removed, and neither can the 4600mAh battery.

Samsung has been making Android tablets longer than most of the brands out there, and while Apple beat most of the manufacturers with a proper next-generation device, Samsung was one of the first with a 7 inch model after it, the original Galaxy Tab.

We still have the original somewhere in a drawer, but remember it as the first solid attempt by a manufacturer to tell Apple that yes, there was a better option for hands than just the 9.7 inch iPad it was presenting to the world.

Fast forward a few years and as Asus and Google worked together to make the Nexus 7, Apple has finally seen a reason to compete in the handheld tablet computer space.

Meanwhile, Samsung has been changing and shaping mobile devices, bringing the pen back into the equation with its popular Note series.

The inclusion of a stylus isn’t the only reason these phones are going gangbusters: they’re big devices, making them easy to find, and helping the online mobile experience with a large viewing area.

But while some of us want a big note-taking phone, others want the note-taking device to be separate from the smartphone, and that’s where the Galaxy Note 8 comes in.

Not much larger than an iPad Mini, think of the Galaxy Note as a digital pad a little more than half the size of a standard A4-sized piece of paper.

In Australia, everyone has seen A4, the most common size used for printers and photo-copiers, and this is like taking a tablet half that size (sort of) with you.

It’s not as thin as a piece of paper, however.

Technology isn’t at the level where a tablet is encroaching on the world of paper-thin electronics, but at 8mm and weighing 338 grams, it’s also not going to be hard to take with you.

For the design, Samsung has gone with more plastic, something that the company seems to bring with it to every Galaxy-branded product, including the S3, S4, Note, and even its Galaxy cameras.

As such, the design can feel a touch slippery in the hands, but still otherwise comfortable. The weight is balanced well over the 8 inch form, and regardless of which hand you take this in, it won’t feel overly heavy, a problem that nearly every 10 inch tablet suffers from.

Switch it on and you’ll see a bright screen staring back at you, with a more smartphone-esque version of Android ready to use.

Unlike the big tablets, phone apps can run here with a bigger display, making games and other applications easier to read.

We tried some of the familiar games, and while the pixels were larger, you don’t have to hold this device as close to your head as your phone, thereby reducing the need to see them.

Interestingly, while the resolution this screen uses is common and slightly outdated now, Samsung has included a mode that aims to make it better, trying to solve one of the problems commonly associated with reading on tablet devices, and that’s a screen that’s too bright for long-term reading.

To help with this, the Galaxy Note 8 includes “reading mode” which changes the colour temperature so as to be less of a pain on the eyes, making book and magazine reading easier for longer periods.

This mode, which can be made to support nearly any app on the tablet, can be turned on and off easily, and seems to help with eBooks, giving you more reason to put away the Kindle and read from your tablet.

Reading mode switched on (left) and switched off (right). The differences are minor, but your eyes will notice them.

We’re also fans of the included S Pen, which not only can be stored inside the tablet, but also – when unlocked – activates an extra menu that shows you extra things to do with your stylus, such as notes and drawings, similar to what happens on the Galaxy Note II smartphone.

The Galaxy Note 8 also functions as an extra remote for your TV if you choose, with included software for viewing an electronic program guide (EPG) and changing the channels accordingly. This only runs in landscape view, but it provides something extra for those you haven’t yet ponied up the cash to switch to either the Samsung Galaxy S4 or HTC One handsets, Android devices that both sport this feature.

While the idea is good, we do think the software needs to look a bit cleaner on the Galaxy Note 8.

There is one thing we are immensely happy with, though, and that’s the charge port.

Finally, Samsung has seen the light and looks to be moving away from the proprietary port it has been using on tablets up to this point, as the Galaxy Note 8 can be charged from the same microUSB port a Samsung Galaxy phone relies on.

That’s one of the most positive things about the hardware, and means that you don’t have to carry an extra set of cables around on holiday if you want to charge.

Speaking of the battery, we managed about two to three days of infrequent use with this tablet, with periods of one or two hours each day. Recharging the tablet seemed to sit around a couple of hours, which seemed to suit us fine.

Over in the processing area, you might see a spot of delay in games here and there, as the quad-core processor works its magic. It’s not the fastest chip a Samsung device has ever had, mind you, but at least 2GB RAM was provided, making multi-tasking a cinch.

Despite its plastic casing, Samsung’s mid-sized Galaxy Note is one of the better Android tablets we’ve played with, feeling balanced in the hands, and supporting the S Pen with a more notepad-like experience.

It could do with a touch more performance and some of the Near-Field Communication connectivity afforded to its smartphone brothers, but if you’re over carrying a pen and paper booklet and would prefer to try out a digital equivalent, Samsung’s Note 8 provides a solid experience. 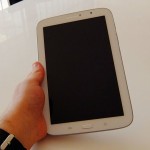 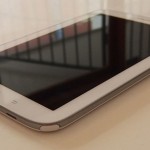 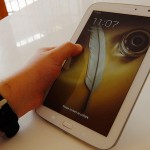 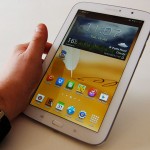 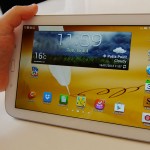 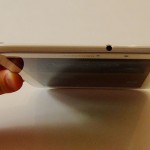 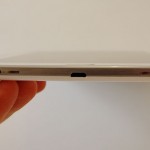 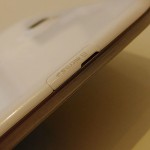 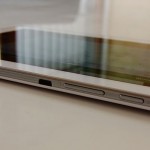 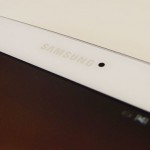 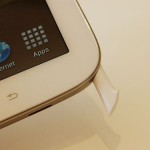 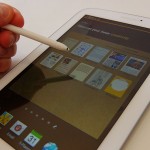 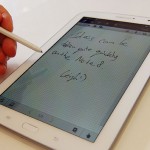 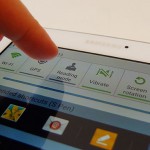 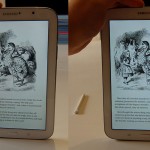 Reading mode switched on (left) and switched off (right). The differences are minor, but your eyes will notice them. 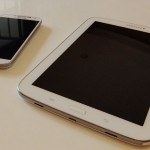 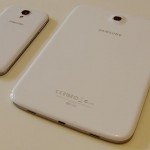