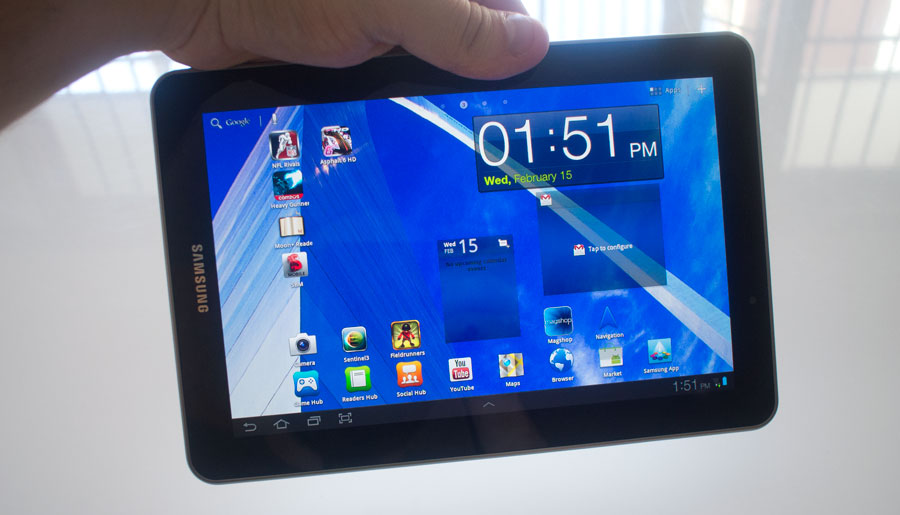 In 2010, Samsung was one of the first companies out with an iPad competitor, breaking into the tablet market with a 7 inch tablet that brought Android in a comfortable size. Two years on, the company is trying it again, slimming it down and refreshing the specs in the Galaxy Tab 7.7.

Designed to be compact, the Galaxy Tab 7.7 is a more pocketable tablet than the 10.1 inch Galaxy Tab this model plays sibling to.

Keeping up with the design used on that model, Samsung has kept with the aluminium and glass build materials, while still finding a way to reduce the size from the first Galaxy Tab in 2010.

There’s only so much you can do to make 7 inches appear smaller, and most of the shrinking from the first Galaxy Tab has been made in the thickness department, dropping from 12mm in the original to a much more svelte 7.9mm.

The screen is also a little different, with Samsung opting for a slightly bigger 7.7 inch panel over the 7 inch one found in the first Galaxy Tab. This new panel features a 1280×800 resolution, and is a Super AMOLED Plus screen, similar to the technology – not resolution – used in the Galaxy S2 smartphone.

This screen size makes the tablet a little taller and a little wider, and combined with the thickness and new reliance on aluminium for the build material, manages to be 40 grams lighter than the 2010’s plastic Galaxy Tab was.

Under the hood, Samsung has changed the processor to a dual-core 1.4GHz processor, which should provide enough room to move for gaming and Android apps.

Like most Android devices, memory options include both 16GB internal storage, with a microSD slot for increasing that easily.

Two cameras are included in the tablet, with a 3.2 megapixel autofocus camera with LED flash on the back and a front-facing 2 megapixel camera with support for 720p video.

Connection options include WiFi 802.11a/b/g/n, Bluetooth 3, and a wired charge and data transfer port with Samsung sticking with the proprietary port it first introduced on the original Galaxy Tab.

Australian models seem to be WiFi only, but Samsung does have a configuration of the Galaxy Tab 7.7 with a 3G modem, it’s just not available here.

Two physical buttons are present here, with a volume rocker and power button all sitting on the right side. There are no physical buttons for using Android, with the buttons appearing at the very bottom of the screen in software only.

A 3.5mm headset jack also appears at the very top of the unit.

From the first glance, it’s clear that Samsung has come a long way since the release of the first Galaxy Tab, not only shrinking the overall thickness of its 7 inch tablet, but also making it feel more substantial. The metal back really makes the Galaxy Tab 7.7 feel like more of a tool you can use than its predecessor, and we’re glad Samsung has moved on from the days when glossy plastic was used in its tablets.

The feel is one thing we really have to acknowledge here, as Samsung has done a stand-out job. Weighing only 340 grams, the Galaxy Tab 7.7 is one of the lightest and most comfortable tablets we’ve felt yet. It neither weighs down your hand nor feels unnatural.

While the tablet is new, Samsung has equipped the tablet with a slightly modified version of Google Android Honeycomb 3.2, able in this instance to take screenshots from one of the soft buttons on screen.

One of the more impressive details of the Galaxy Tab 7.7 is the battery. There’s no other way of saying this: it’s excellent. We managed over three days of standby time for occasional use, and then after a recharge managed 8 to 10 hours straight.

In general, if you plan on only using your tablet from time to time, you’ll find you won’t need to charge the Tab too often.

The other excellent detail is the screen, a bright and clear screen that’s right up there with the best of them. While the resolution of this baby isn’t quite up there with the Retina grade screens found on the iPhone, it’s still a beautiful display for the size.

Over on the negative side, there is a little lag in flicking between the homescreens, using the cameras, unlocking the touchscreen, and we even noticed it in a few games, but overall, it’s manageable.

We’re still not huge fans of Samsung’s proprietary iPod-dock-like port, but at least the company hasn’t changed the design. It would be great if the Galaxy Tab would take advantage of the same microUSB port seen on the Galaxy smartphones, as that would certainly save us from bringing two types of adaptors on trips.

An update to the operating system would be nice too, with last year’s Android Honeycomb arriving on this model. Now that Google’s latest version – Android 4.0 Ice Cream Sandwich – is gracing platforms across the world, the OS update is really a thing of need in this device.

The old Galaxy Tab on the left is much thicker than the new Tab 7.7 on the right.

If the 10 inch form factor is too much and you prefer the idea of a smaller tablet, the Samsung Galaxy Tab 7.7 could be the perfect match. With an excellent screen, solid build, and outstanding battery life, it’s a great tablet for anyone after a small screen tablet experience. 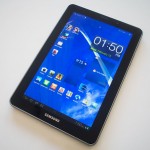 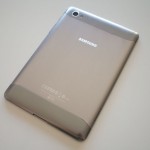 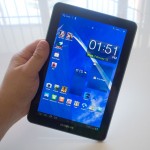 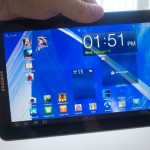 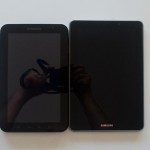 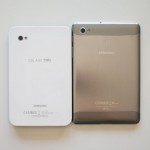 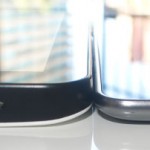 The old Galaxy Tab on the left is much thicker than the new Tab 7.7 on the right. 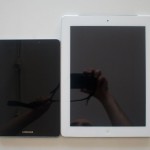