Smartphones might work well as communication and internet devices, but camera performance typically isn’t strong. Sony Ericsson seeks to change this with the Xperia Neo, a phone packed with Sony CyberShot technology and ambitions of replacing the need for a standalone camera.

Sitting pretty at 126 grams, the Sony Ericsson Xperia Neo features a 3.7 inch scratch-resistant screen atop a curved plastic body, a design the company contends fits snugly in the hands.

Interestingly, much of what Sony Ericsson threw into the PlayStation-certified Xperia Play smartphone is found here in the Neo, with the same 1GHz processor, Adreno graphics chip, Google Android 2.3 Gingerbread OS, WiFi b/g/n, DLNA support, GPS and Bluetooth 2.1 with A2DP.

Like the Play, there’s virtually no storage in the Neo either, although an 8GB microSD card is included to compensate for the paltry 320MB internal capacity.

Unique to the Neo, however, is the 8 megapixel camera. This has autofocus and LED flash, but more importantly, it’s equipped with the Exmor R backlit-CMOS technology used on digital cameras from Sony Electronics, designed to work well in dark environments and capture images in quality comparable to that of a compact camera. This augurs well for quality of images captured by the smartphone and, in particular, the camera’s low-light capabilities.

Traditionally, mobile phone cameras haven’t seen strong performance as competitors to compact cameras, due largely in part to the tiny sensors being used. Here, Sony Ericsson is adapting technology from Sony’s successful CyberShot camera range. This method could bode well for the Neo, making an impact in mobile phone image quality where other handsets have failed.

Sony Ericsson's customisations of Android are very nice, including a pinch to zoom that consolidates all of your widgets on the one screen.

Call quality is boosted by support for high definition voice calling, although this is available only via Telstra’s NextG network.

The ports located at the top of the handset will be adequate for most multimedia fiends, and include a mini HDMI port, 3.5mm headphone jack, and microUSB port for moving data and charging the handset.

As we saw on the Xperia Play, Sony Ericsson’s modifications to Android are good ones. Five homescreens are available to customise and decorate as you please, with included widgets for social networking updates, clocks, media playback, and access to Telstra’s BigPond Music store. And in a nice touch, pinching a homescreen on the Xperia’s Android overlay collects of your widgets into one easy-to-view screen, making it easy to see all of your activities at once.

Those still using their phone for voice communications will enjoy better than average call quality via HD calling over Telstra’s Next G network too. The difference between it and standard call quality is best compared to that between analog AM radio broadcasts and their digital simulcasts, with audio sounding more crisp and voices easier to understand.

With their teeny weeny doors attached by thin pieces of plastic, we’re no fans of the mini HDMI and microUSB compartments, however. While they’re unlikely to become unhinged and lost, they are a real pain to open and close each time you need to charge the device or transfer data. Why not just leave these ports exposed, or use sliding covers?

We don't think the doors were necessary.

The Xperia Neo is the first mobile phone we’ve seen that locates the lens near to where it would be on a digital camera – a little bit right of the middle. This means that, unlike every other smartphone, which locates the camera lens near the edge of the handset, it’s actually hard to accidentally cover the lens with your fingers

Taking a photo can be difficult, however, with the dedicated camera button needing a firm hand to activate photo mode. Once you’re in, though, taking a picture using the same button doesn’t require anywhere near as much pressure, resulting in quick shooting for a phone camera.

You’ll also need a firm hand to remove the memory card for use in a computer, printer or other device, because the microSD slot is a super-tight fit. Actually, that’s not quite right: it’s a super-duper-luper tight fit. In fact, we couldn’t remove it at all.

The placement for the camera is closer to the centre of the handset.

Battery life was on par with competition Android phones – around a day – although frequent use of the camera diminished charge levels quickly, which is to be expected.

There’s good value in Sony Ericsson’s $528 Android Neo, and if you’re after a phone with a good camera for outdoor activities, it’s an easy recommendation. 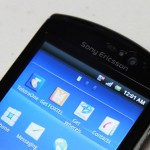 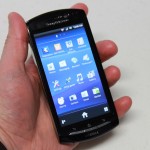 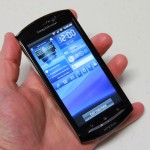 Sony Ericsson’s customisations of Android are very nice, including a pinch to zoom that consolidates all of your widgets on the one screen. 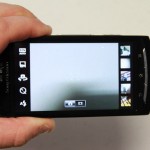 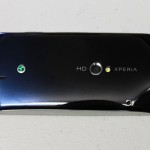 The placement for the camera is closer to the centre of the handset. 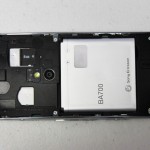 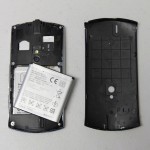 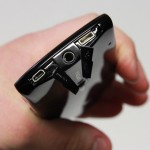 We don’t think the doors were necessary. 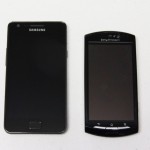 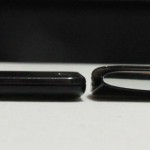 Sony soups up binoculars with 3D shooting, operas will never be the same again