The Ultrabook touch market is heating up, and with the launch of Intel’s fourth-generation processors, these computers are apparently better than ever. Sony’s take on this space is to make the lightest computer you’ll probably ever see and feel, and wow, it’s an impressive piece of kit.

Announced just under a month ago, Sony’s VAIO Pro is the company’s take on what the Ultrabook experience should be. Two models are being released in the line-up, with the VAIO Pro 11 starting at $1299 and competing against thin and light machines like the Apple MacBook Air 11, which starts at $1099.

Sony’s machine is different, and from a specification perspective, superior in some ways.

This screen supports touch, and even includes Sony’s Triluminos colour gamut technology, which can be seen on the 4K Ultra High Definition BRAVIA displays.

Under the hood, you’ll find Intel’s latest Core technology, the fourth-generation processor and chipset technology which aims to improve battery life, graphics, and keep system performance strong across the board.

In our review unit, there’s an Intel Core i5 clocked at 1.6GHz, paired with 4GB RAM and 128GB of flash storage. Graphics technology hasn’t quite reached the full extent of Intel’s Haswell, and HD4400 is used here, not the HD5000 of other Haswell computers.

Windows 8 is the operating system included here, with wireless supported through 802.11 a/b/g/n, Bluetooth 4.0, and even Near-Field Communication. Ports arrive in the form of two USB 3.0, a headset jack, SDXC card slot, and a lone HDMI port.

A camera is included too, running the HD capable Exmor based webcam at the top of the frame.

While the touchscreen will likely be a primary way of controlling Windows, there’s also a gesture supported touchpad underneath the backlit keyboard.

The chassis is constructed from carbon fibre and aluminium, which should make the machine both light and durable, while a plastic cover protects a small port under the laptop for the addition of an extra battery pack.

Sony also has a redesigned power charge brick which features a USB port to recharge your other devices.

Sony’s history in making laptops has been a colourful one, with many a bright and dynamic VAIO popping up over the years, but the Pro 11 is a different beast.

Like many other machines out there, the aesthetics of this one follow the dark professional design we’re used to, with a charcoal coloured surface that won’t necessarily draw the attention of onlookers.

But it’s what’s on the inside that counts with this laptop, and the Sony VAIO Pro 11 has to be felt to be believed.

With a weight of 870 grams, this is a machine that is just a smidgen heavier than an Apple iPad, and yet packs in a hell of a lot more in terms of power and usability.

You’d never believe us that this is the lightest full-featured laptop ever until you go into a store and pick one up for yourself.

To make this happen, Sony has moved beyond aluminium or magnesium based alloys for the material, and gone instead with carbon fibre, making this weight – or lack thereof – minimal.

There is some aluminium here, such as on the wrist pad, and it helps to keep that area cool while you’re typing.

This combination of materials makes the VAIO Pro light and lovely, and barely noticeable in your luggage or hand. It’s the first time we’ve come across a notebook like this, and we’d love more like it.

Open it up and you’ll see the familiar clamshell notebook design. This is all Ultrabook, but thanks to the integration of Intel’s new fourth-generation chips – also known as “Haswell” – you’re assured of having a touchscreen, which is now a requirement for Ultrabooks using this range of processers and chipsets.

And what a touchscreen it is.

This year, we’ve seen all the divisions of Sony start to talk to each other, which appears to be a first for the company. As a result, tablets, smartphones, TVs, cameras, and AV gear now all share some of the technology.

The screen is one such area, with Sony using its Triluminos display technology to provide a stronger colour range across the board.

The display also measures 11.6 inches, and yet packs in an impressive Full HD resolution of 1920×1080, much higher than the 1366×768 in the 11 inch MacBook Air, and on par – at least from a resolution point of view – with the 11 inch Acer Aspire S7, which won’t actually be available in Australia this year.

As a result of these combined technologies, you’ll find the 11 inch screen here is sharp, bright, and very well balanced, and thanks to the Triluminos technology used in the BRAVIA TVs made by Sony, images look excellent.

In areas with a lot of light, you might find the screen a touch reflective, but it’s an area that can be overlooked as the display is just that bright and easy to look at.

We do think the screen hinge could do with some tightening, as every poke and prod on the touchscreen results in a fair amount of shake, but it’s not a detriment to the operation of the laptop.

Also worth noting is the display which, when opened, raises the slope of the laptop slightly. People who prefer typing on a full flat surface will be a touch disheartened here, but it’s actually quite comfortable with this rise.

Under the hood, there’s a new processor and chipset technology to play with.

Our review model was the Intel Core i5 model clocked at 1.6GHz, which should be more than enough for most people to work with. As such, we didn’t have any problems jumping between apps and running multiple browser tabs, though we’d have taken an increased supply of memory, as 4GB might not do the laptop justice over the course of a couple of years.

Likewise, the 128GB storage should be plenty for most work on the go, but we’re less enamoured with the amount of bloatware on this machine, with only half the storage amount present when you finally switch it on.

The Intel Haswell launch gave us a preview of the new Iris graphics in the new chipset, but that’s one area that hasn’t improved dramatically in this model, with a slight improvement on last year’s HD4000 graphics in the form of HD4400.

We don’t expect the Sony VAIO Pro 11 to be used for loads of gaming, but you probably won’t get an amazing boost here if you choose to.

We’re fans of the decent supply of ports Sony has provided in the tiny 11 inch size, with two USB 3.0, one HDMI, and a combined headphone and microphone jack, with an SD card slot at the very front, a feature Apple doesn’t think is needed on the 11 inch MacBook Air.

The wireless support is also decent here, with Bluetooth 4.0, while the Near-Field Communication sits under a logical place: the trackpad. This makes it easy to pair devices supporting NFC, with a simple wave over the touchpad starting the wireless handshake.

WiFi is also here, though we’re a touch surprised Sony didn’t include the latest communication technology, with no ac support, though 802.11 a/b/g/n is here.

Kudos also goes to Sony for seeing that the battery charging power supply needed a redesign. On the VAIO Pro range, it’s now easier to carry with a slightly smaller brick design, and even arrives with a USB port on the other side of the brick so you can simultaneously charge your smartphone while your recharging your laptop.

Sony also makes a wireless access point that can plug into this USB port, sharing a wired Ethernet connection (like at a hotel) with lots of devices, but this is an optional purchase.

On the negative side of this laptop are areas which aren’t terrible, but aren’t as impressive as you’d expect a fairly high end computer to be.

Over in the keyboard section, the keys provide enough travel to work with, but they’re so springy that it’s impossible not to feel that you’re typing on a cheap input device, and even brings to mind the lesser writing experience one could find on the old Windows netbooks.

It’s not that you won’t get any typing done on the VAIO Pro 11’s keyboard, but it just won’t be as satisfying as other keyboards out there.

The mouse is equally lacking, although you do get a very good touchscreen for your troubles. The trackpad is more of a spare, as if Sony is providing it in case of emergency. Unfortunately, that emergency will be laden with frustration as clicks often go unregistered, even though gestures seem to work perfectly.

With Intel’s latest Core processors (fourth-generation), the battery life is supposed to be better than good, it’s supposed to be awesome, and worthwhile on an overseas trip.

In the 11 inch VAIO Pro, battery life is a mixed bag.

Our first test revealed that the on-board battery barely survived a life of roughly four-ish hours, and that was while writing documents, surfing the web, checking email, and doing the regular work schtick many of us will be doing.

Later on, though, the laptop worked its way up to a more impressive seven-ish hours, which is more than reasonable, especially if you plan on taking a trip overseas and you need to get some work done.

Whatever life this laptop offers, Sony has made an optional battery pack that will bring you an extra few hours and comes with the added bonus of not costing you an arm and a leg.

It also raises the slope of your laptop a little, so factor that in if you plan to do some typing.

Despite a few flaws, Sony’s VAIO Pro 11 is one of the more impressive machines we’ve seen, creating a proper PC experience in one of the lightest designs yet.

It’s also nice to see that Sony is competing with the prices of other Ultrabook manufacturers, and with a starting price of $1299 and featuring an excellent screen, decent processor, and amazing weight, the Sony VAIO Pro is a top choice. Recommended. 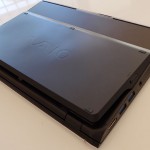 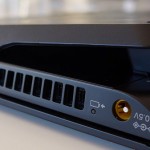 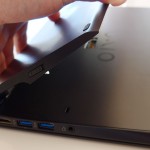 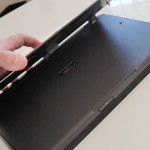 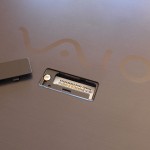 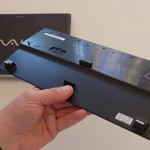 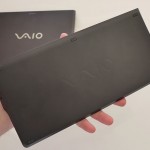 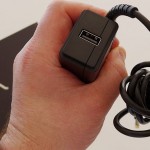 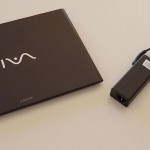 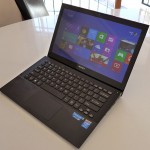 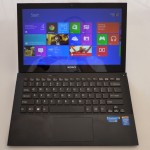 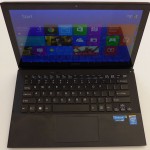 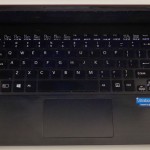 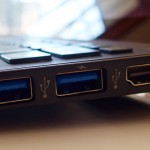 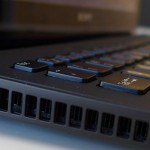 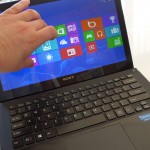 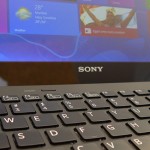 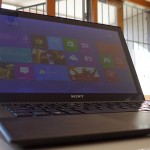 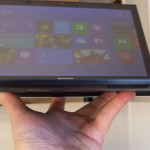 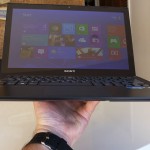 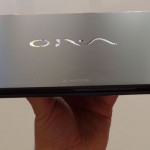 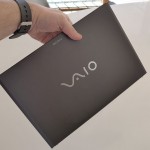 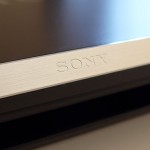 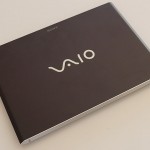 UE’s Boom 2 to be louder, waterproof, easier to control