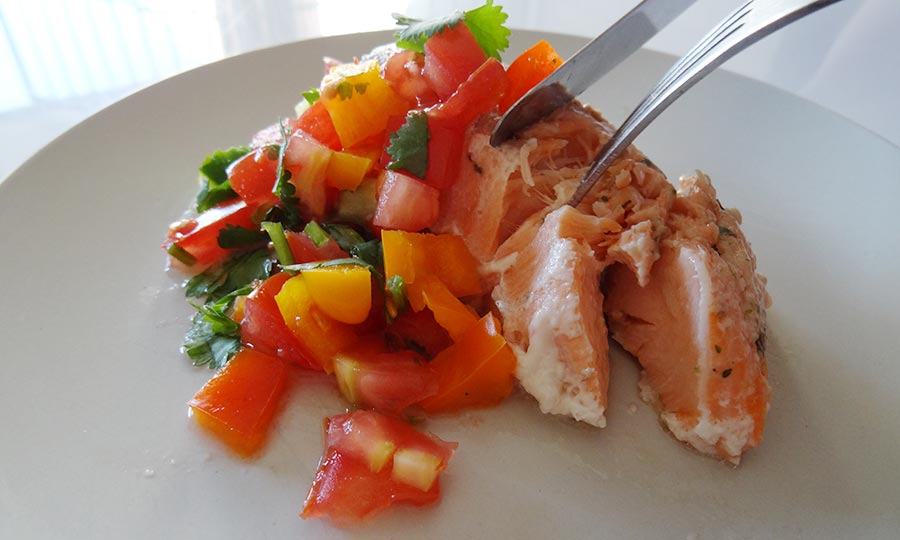 Television cooking shows like “Masterchef” are showing us a new way of cooking our food, with the 70s French technique of sous vide finally coming to homes everywhere. Is this the new microwave, or something only budding chefs should try?

In 2011, celebrity chef and molecular gastronomer Heston Blumenthal was quoted as saying that a new cooking technology would “revolutionise home cooking in ways the microwave didn’t even dream of doing.”

That technology was sous vide, a process that originated in France in the 70s and was based around the idea of keeping vacuum sealed food in a water bath where it sit in water of a specific temperature and be allowed to cook at that temperature consistently for a set period of time.

Essentially, the idea works like this: take your food, seal it with a vacuum sealer, and then set the temperature for the desired level of “doneness,” so to speak.

If you’re making a steak with 2 to 4cm of thickness, you’d probably want a temperature of 56 degrees Celsius, with a cooking time of an hour. If you like it done even more, turn the temperature up some more.

Meat out of the sous vide. It looks much better once it hits the pan for a few seconds.

Once the food is cooked, you can take it out of the water bath, rip it from the bag, and then – if you choose to – caramelise the ingredient by searing it with butter or oil in the pan. Or just take it out and eat it the way it is, which can be done if you’re cooking eggs, fish, or fruit in the sous vide.

To make a sous vide work, however, you can’t just throw a piece of food in and hope for the best. The food would likely break up in the water, so you need to have a vacuum sealer and make the food you plan to cook sit in an airtight vessel.

So before you go to work cooking your food, you’ll need to marinate or season the ingredient, throw it into a vacuum seal pouch, seal it, and only then is it ready to be cooked in the sous vide.

Sunbeam’s Duos Electronic Sous Vide (MU4000) works to provide the French water bath technique at a price that won’t stretch the budget too much, and also pack in some extra functionality.

The appliance features a 5.5 litre tub capable of cooking up to five pouches of vacuum sealed food.

The system is electronically controlled and can cook food for between one hour and 24 when operated as a sous vide, with temperatures ranging between 40 and 90 degrees Celsius.

It’s a feature that makes a lot of sense, since the processes would be similar, except without warming up water and cooking the food in its liquids.

Either way, the combining of cooking techniques makes a lot of sense for Sunbeam’s Sous Vide, and means you don’t need to have two devices when you only need one.

When working in this way, the slow cooker modes include low and high, with an auto “keep warm” mode once the dish is done.

A vacuum sealer is required to cook most foods in this way, but this is not included in the package.

You will need to buy one of this, a separate purchase. Sunbeam’s EasySaver vacuum sealers start from $129, but the Sous Vide is compatible with vacuum sealed packages from any manufacturer.

Sealed and ready to be cooked.

Ease of use and performance

If there’s one thing the Sunbeam Sous Vide has going for it, it’s definitely simplicity.

There isn’t much to its design, and the entire unit basically consists of a tub, heating unit with temperature sensor, controls, and a lid. A rack sits inside the tub, but that’s just to hold your food packages in place when the water is filled up.

Using the Duos is easy, provided you have the vacuum sealed food: fill up the tub with water, turn the appliance on, set the desired temperature and cooking time, and then let the Sous Vide heat up, a process which can take some time.

Once it’s done, it will beep, a sign that you can now put your food in, which due to the water temperature, you should probably do with a pair of tongs.

When the packages are in, close the lid and start the cooking process. From here, you’re letting the Sous Vide do the work, cooking sealed food at a specific temperature for a specific amount of time.

Sunbeam’s manual will give you an idea of what temperatures and required time for some food, but there are plenty of other books out there that can detail specifics even closer, and it’s specifics that you want when you’re dealing with a precision cooking technique such as this.

For instance, we threw two cuts of beef into the Sous Vide and one piece of salmon, all operating at the same 59 degree Celsius temperature for an hour.

When the food is done spending time in the Sous Vide, it’s time to take the packages out of the cooker carefully – again with tongs – and then open them, to see cooked food inside.

From here, you can choose to eat or dress the food the way it is – as we did with the salmon, which had been cooked exactly the way we wanted it – or sear it in a pan, a quick flash of caramelisation in a hot pan making a piece of meat look better, while the inside remains the same perfectly prepared from the operation of the sous vide.

That’s literally all there is to the appliance, at least from the sous vide side of things.

Outside of this, you also have a slow cooker, which means removing another appliance from your cupboards, since the technology – a tub that warms up and stays running as it cooks the ingredients inside – is essentially the same technology.

One downside of the package, though, is that you can only really store five pouches in the Sous Vide as a maximum, and they can’t be very big at that. A piece of meat, half an apple – that sort of thing. Don’t expect to throw several steaks into one bag as neither the rack nor the tub or bags will really support it.

You also need to be pretty specific with cooking cuts of meat to these temperatures.

For instance, the 59 degrees we cooked slabs of sirloin worked perfectly for medium, and cooking salmon alongside it was fine too, but the thinner rump steak was closer to being well done at the same temperature for the same amount of time.

Basically, don’t expect to cook different cuts of protein at the same time in the Sous Vide as it often just won’t work, at least not in the way you expect. This is different to cooking over a pan, as you’re monitoring the food yourself and not relying on a temperature and timer, something you’ll be doing with the Sunbeam Sous Vide.

You’ll also be waiting around thirty minutes to an hour to have the system warm up, depending on the temperature you need to reach.

Technically, this isn’t a lot of time, but is something to be aware of, and means that the minimum one hour cooking time isn’t the only duration you’ll have to spend doing something else.

Fortunately, the Sous Vide will beep at you when it’s ready to be loaded with food and then be manually started, but it does mean you have more minutes to factor into the cooking time.

Salmon cooked at 59º for an hour and dressed with a summer salsa made from vine capsicum, cucumber, tomato, red onion, coriander, and lime juice. Because we can.

Sous vide may be about cooking food to specific temperatures, but Sunbeam’s entry-level Duos Sous Vide does a little more than just offer a beginning to people starting out with this cooking technique.

Rather, it’s also an easy way for people to cook without actually being there, allowing budding chefs to prep their food ahead of time, seal it, and then cook, making it a neat way of perfecting taste, texture, and flavour without sitting by the pan and nailing it.

There is a fair amount of time involved, and thanks to the requirement of a vacuum sealer, bench space is also a requirement, as is the spend on two appliances.

That said, there are only two sous vide machines in the marketplace, and Sunbeam’s is the least expensive of all of them, making it the best starting point for budding chefs keen to see what all the fuss is about. 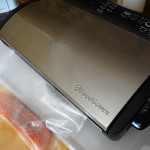 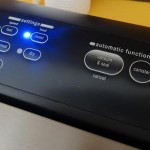 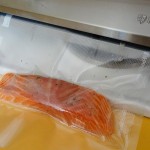 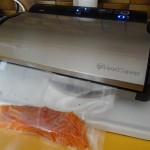 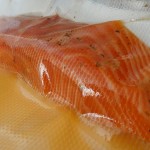 Sealed and ready to be cooked. 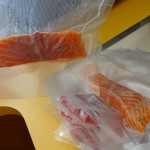 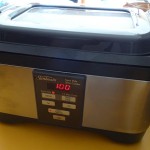 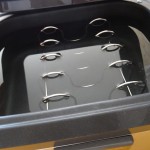 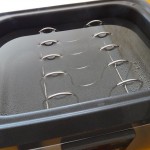 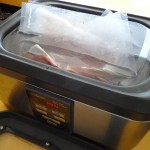 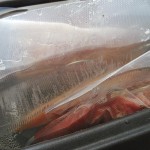 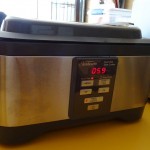 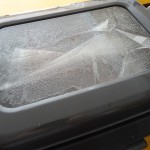 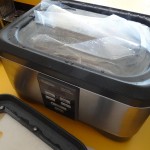 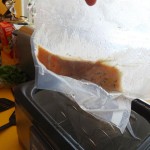 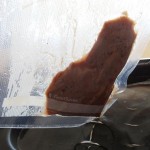 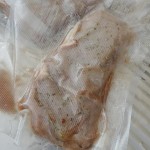 Meat out of the sous vide. It looks much better once it hits the pan for a few seconds. 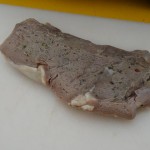 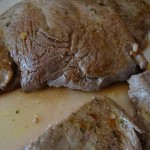 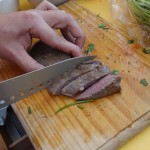 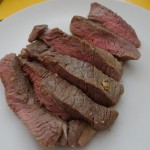 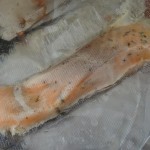 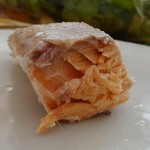 Salmon cooked for an hour at 59º Celsius. Yummy, too. 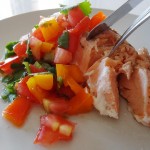 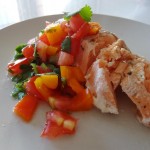 LG clears the water with new a big new fridge

Nespresso connects to phones for your daily dose of java