We may well love phones, cameras, and computers, but toasters hold a special place in our hearts because, well, who doesn’t love toast?

Sunbeam’s latest take on the modern toaster adds an LCD to the package, making the toaster more than just a random piece of cooking gadgetry.

A toaster is a toaster, or so some would like you believe.

Sunbeam doesn’t appear to think so, and has built a premium toaster for people who like premium gear, with a touch of the modern thrown in.

For starters, the Maestro is like a regular toaster oven in that it toasts bread.

Slices of it, to be precise, with two on the model we reviewed, and up to four with the four slice unit. The slots are wide enough to support thick breads like bagels, as well as the conventional toast-sliced bread you can find in stores.

Controlling the Maestro isn’t handled like the conventional toaster’s knob or dial, with Sunbeam providing an LCD screen with two buttons for raising and lowering the heat, while also extending the browning process and applying it to other modes.

As such, six browning settings are offered in the Maestro toaster, with settings specifically for crumpets, as well as modes to let you reheat toast and defrost frozen slices of bread.

A cancellation button can also be found on the side, with the pull down lever for the bread also able to be used when the toaster is cooking. This feature is called “Quick Check” and allows you to pull your slices of bread up, giving you a peek as to how toasted they are while they’re cooking.

Alternatively, the lever also allows you to push the slices of bread up past the slot entry, making the toast easier to extract from the toaster once they’re finished cooking.

The Sunbeam Maestro toaster is encased in stainless steel, and runs at 1050W.

There are many out there who believe a toaster should take around a minute to cook bread and turn it into something usable at breakfast. This probably comes from the phrases people used when referencing toasters, and how you could go away for a minute and come back to toasted slices of bread.

But toast takes a little longer to make than simply sixty seconds, and that seems to be one of the primary messages of Sunbeam’s Maestro, a toaster that packs in a feature we’ve yet to see on a toaster: an LCD screen with a countdown timer.

Pretty much every other toaster we’ve seen thus far has relied on the tried and trusted knob or dial design, with a few of these even supporting an LCD screen to tell you what level of browning you’ll be toasting at.

Sunbeam’s Maestro, however, goes beyond this by not just providing the power level, but also giving you a timer for the toast, and counting down from the moment you pull that bread down into the cooking slots with the lever.

Using the toaster is about as easy as, well… it’s a toaster, so it’s very easy to use.

We generally go with the rule that if a consumer-ready device really needs the manual, it hasn’t been designed properly, and that rule seems to apply even more so with a toaster.

On the Maestro, you merely need to remember to do two things:

The first is to set the level of browning you’re after, making sure to highlight if you’re using any specialty breads that may require specialty toasting.

For instance, while “crumpet” is the only specialty bread setting available on the Sunbeam Maestro, this setting seems to also work well for any hot cross buns you’ve cut up, and any thicker bread with the white on one side and the heavier baked exterior on the other side.

Bagels, however, don’t seem to work well with this mode, and appear to be toasted a little too easily, as demonstrated by our test below.

Those who love to control their toast to the nth degree, and know that a setting of 3 is exactly what they need for white bread versus a setting of 4 won’t be too happy with the Sunbeam, though.

For all it gets right, there are only six browning settings, which for some people won’t be enough, and unlike the traditional toaster dial, there is no middle ground between the settings.

Showing that, we tried toasting our raisin toast on the lowest setting and found that while it wasn’t overly browned, it was more crispy than we’d have otherwise liked.

The easiest solution to this is to watch how brown your toast is getting through the toasting process, and taking advantage of the Quick Check lift Sunbeam has built into the toaster, but it’s a manual process, so stick around, otherwise your breakfast may well be crunchier than you’d otherwise like.

Sunbeam’s Maestro is certainly an intriguing toaster, taking one of our favourite home appliances and not just applying a tech savvy spin, but also making it capable of cooking a choice crumpet.

The $100 price tag and six specific control settings won’t make it perfect for everyone, but if you’ve been itching to see how the toaster could change for the modern technological age, this is about the closest we’ve seen. 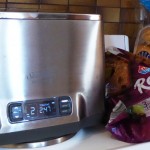 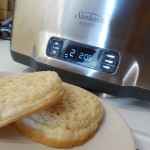 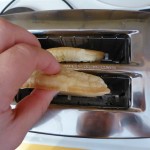 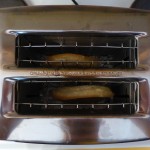 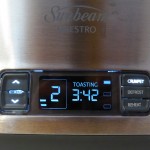 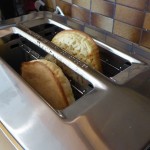 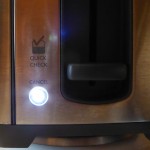 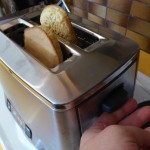 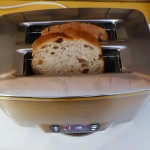 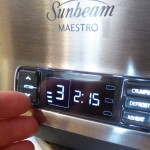 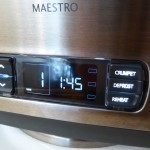 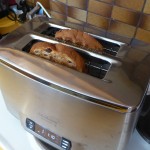 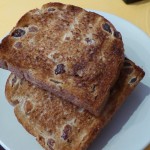 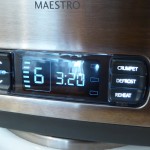 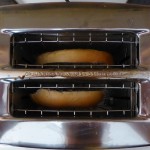 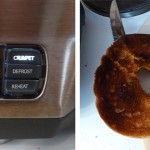 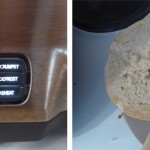 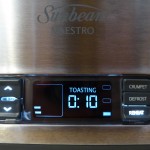 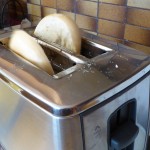 Review: Sunbeam Maestro toaster
Price (RRP): $99.95 for the 2 slice toaster; $129 for the 4 slice toaster; Manufacturer: Sunbeam
Nails crumpets and hot cross buns perfectly (provided you face the bread to the centre); High lift level means the toast is always easy to get out of the toaster; Quick Check level is great for seeing how the toast is going; LCD screen is clear and easy to use, always providing a timer that's easy to read; Loud beep tells you when the toast is ready;
Not very controllable; Lowest level might not be low enough depending on the bread you buy;
Overall
Value for money
Performance
Ease of Use
Design
3.9Overall Score
Reader Rating 0 Votes
Share
Tweet
Share
Share
Tweet
Share

LG clears the water with new a big new fridge

Nespresso connects to phones for your daily dose of java