There’s some doubt that Tiger Woods PGA Tour 13 has benefitted from that trademark level of application this year. But the 16 modelled golf courses look acceptable, the player models are fine, exhibiting realistic movement and great likenesses, and there are sufficient game modes – including the superb simultaneous play multiplayer mode – to keep the most avid golfing fans interested.

You’d need to be pretty expert with the ‘Tiger’ series to spot most of the changes this time around, which is the case every year, in fact, but new features have made their way into this year’s iteration of the game, including online country clubs, a new swing system, ‘Boost pins’ and a new “Legacy Challenge’ mode, which (pointlessly) allows you to play as Tiger the toddler.

Whether these features constitute ‘improvements’, however, are another matter.

Toddler Tiger is a rather... strange game addition.

Along with the 16 courses provided in the game you buy, and 16 is a good number for a golf game, let’s not forget that, there are a zillion other courses (actually currently 17), items and ‘buffs’ on offer to either boost gameplay time, help your golfer achieve greatness or just make them look good.

But you have to buy them, with real money (or more points that you’ll ever earn in your lifetime… so with real money then). A lot of people like this ‘downloadable content’ or DLC, ourselves included, and will fork out cash if it’s good enough. But Tiger 13 appears to set a new benchmark for just how much DLC is available, and how much EA’s cajoling attempts can interfere with the game you’ve already paid for.

If you just choose the quick play option to play a round, you’re presented with a screen that appears to offer you an incredible choice for courses, until you realise that most of it simply isn’t available to unless you pay extra. As we said, the 16 courses that ship with the game is a good number, but perhaps EA need to strike a better balance between having additional content to offer and how they offer it because, as it is, the experience is that you’ve just bought a game that is largely locked down and unavailable, which isn’t true.

First, playing a round of golf in Tiger Woods feels like the game is set in the movie ‘I Am Legend’: the place feels deserted and almost entirely bereft of atmosphere. This is especially noticeable in light of another recent golf game release, ‘Everybody’s Golf’ which, while it lacks the authentic courses and players of a big spender like EA’s Tiger series, is otherwise chock full of both major and incidental detail that brings the golf course to life.

In fact, that very lack of ‘authentic’ content is one of the rival’s biggest strengths, as it allows the course designers to include all sorts of content that we’re willing to bet would receive an instant veto from Tiger Wood’s management. The result, sadly for Tiger Woods 13, is a very hollow playing experience, where the player feels like they’re just going through the motions.

The second issue, strongly linked with the first, is that playing Tiger Woods PGA Tour 13 just isn’t much fun. While the Tiger series clearly aims for reproducing the most realistic and authentic golf-playing experience possible in a videogame, its rival – Everybody’s Golf – is just as clearly aiming to live up to its name. The guys at EA patently believe that more authenticity will bring more players, whereas we’d be willing to bet that the reverse is true, even with the ‘new, improved’ golf swing mechanic, which seems to get an unnecessary overhaul every year. There’s also some incredibly random putting and the ridiculous requirement to start with a new character player every single year, with a reset on skills forcing you to work your way back up to being a decent golfer.

These problems virtually ensure that the only people the game will appeal to is the most hardened golfing fan in the universe. And masochists.

The end result being that, if you have a previous version of Tiger Woods PGA Tour, and do not live and breathe golf, there’s very little reason to indulge in this 13th iteration. 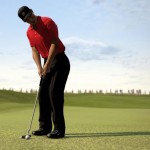 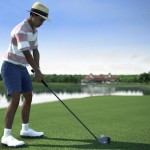 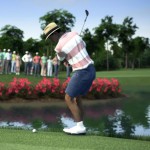 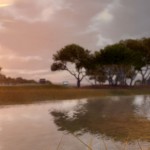 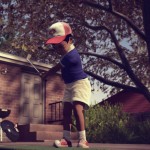 Toddler Tiger is a rather… strange game addition. 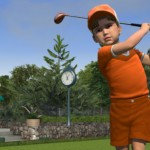 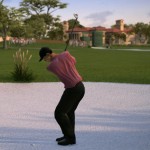 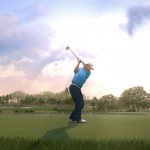