A 13 inch tablet? For real? Apparently so, with Toshiba surprising everyone and testing the waters with an oversized Android tablet measuring 13.3 inches diagonally and browsing the web with the biggest touchscreen we’ve rested on our laps.

Borrowing a design that’s becoming quite familiar for Toshiba, the AT330 stuffs modern technology in an aluminium body that also houses a screen looked like it has been taken straight from an Ultrabook.

The main part of the tablet is obviously a screen, and here Toshiba has provided a positively huge 13.3 inch screen supporting 1600×900 resolution, also known as 900p, making it one of the larger tablet screens out there, not just in physical size, but also in resolution.

Toshiba’s choice of technology inside the tablet doesn’t move too far from what we’ve seen in other tablets this year, with Nvidia’s Tegra 3 quad-core processor used, alongside 1GB RAM, 16GB built-in storage, and Android 4.0 Ice Cream Sandwich.

An SD card slot has also been provided, allowing you to upgrade the memory, or move images straight to the tablet from a digital camera.

Camera functionality is pretty standard here, with a 5 megapixel rear camera with LED flash, while a 2 megapixel camera sits on the front, offering HD video conferencing or two megapixel self-portraits.

With a 13 inch tablet, the on-screen keyboard is very big.

Wireless functionality is also pretty standard, with WiFi 802.11 b/g/n, GPS and Bluetooth 3.0, while wired is covered with both microUSB and microHDMI ports.

Because Android is fairly button-less these days – especially on the tablet incarnations of Google’s operating system – you’ll find few physical buttons here, with a power button on the left side, and just around the corner a rotation switch sitting pretty next to a volume rocker.

Interestingly, the charge port for the AT330 isn’t like the ones we’ve seen on prior Toshiba tablets, with the elongated proprietary port ignored here, replaced instead with a smaller circular port closer to what Toshiba’s laptops use.

Up to this point, tablets that weren’t based on laptops have had a maximum size between 10 and 11 inches. That was pretty much a given, and while Apple has helped cement 9.7 inches as one of the best sizes to work with, Android manufacturers have mostly settled on the 10.1 inch widescreen size.

With a 13 inch tablet, Toshiba is clawing at something different altogether.

More table than tablet, the AT330 borrows from its smaller brothers not only in design, but also in build and operation, blending the look and feel of Toshiba’s current line-up with a panel you’d expect to find on a premium notebook computer.

In the hands, the tablet feels just as well built as the AT270, the 7 inch model we tested and reviewed earlier this year. Toshiba’s use of aluminium is a welcome one here, and while the tablet is physically big, it’s not very thick, barely a few millimetres more than the height of a 3.5mm headset jack.

Even though it’s not terribly thick, the AT330 isn’t easy to hold. The size is fairly cumbersome, as you can imagine, and a 13.3 inch screen is practically impossible to hold in one hand comfortably.

Two hands doesn’t make it much better, as a portrait hold is unbalanced and a landscape position almost makes you feel like you’re holding a terribly oversized video game system.

Sure, Toshiba's AT330 (right) is big, but it's not very thin, especially when thrown up against the iPad 2 (left).

While the AT330 features a 1600×900 screen, it’s actually not as impressive a resolution as you think. Over on a laptop, we’d be reasonably impressed, but on a tablet, we’re beginning to see 1920×1080 and higher on tablets.

That said, Toshiba is offering an immense amount of screen real estate in this tablet, with a 13 inch screen never really been implemented before in an Android device.

In theory, that sounds like an awesome concept, as you should have even more room for widgets, shortcuts, and the apps you run, kind of like a computer.

But then reality hits and you start playing with the tablet, only to discover that over in the world of Android, few apps or games really take advantage of the massive resolution.

You’ll see it pretty quickly when you enter the Google Play Store, with either a centred screen flanked by black bars when viewed in landscape, or the longest app store ever in portrait mode.

Other apps look as if they’ve been blown up to support this massive resolution, resulting in visuals that can look pixelated or even distorted.

Applications that rely on real text – such as email, Gmail, and web browsers – will support the huge 900p display without any problems, especially in landscape, though we’d recommend staying away from the vertical portrait mode, which makes everything so long that it can be very awkward to use.

How a webpage looks on an iPad (left) compared to the AT330 (right) when both are held vertically.

It’s surprising that Toshiba didn’t truly customise Android so that you could load apps side by side, as a resolution this large and wide could have made it much easier to view two apps at the same time – say Twitter and a website – similar to how LG is making things work with its upcoming Optimus G.

There’s also a side to reviewing this tablet we had to think long and hard about including, and that’s the sort of looks you get in public, or rather, how it feels that people are constantly staring at you.

Normally, we whip out our smartphones and tablets on public transport without any problems. They’re consumption, work, and play devices, so we don’t have any problems with watching videos, writing for work, and playing games or reading e-books and digital magazines on the way to and from work. No issues there.

Think the iPad is big? This thing is even bigger.

But with a 13 inch tablet, you constantly feel like everyone is watching you, because the thing in your hands is just so monstrous.

It’s a 13 inch tablet, or a 13 inch screen ripped from a computer and converted into a tablet. We’re not sure if people are aware of this, or if they even care, but you can definitely feel the eyes are on you when you’re using this in public.

Closer to a table than a tablet, Toshiba’s attempt at an oversized touchscreen is an interesting device. It’s hard to say just who would buy this machine, with a certain heft, strange way of holding it, and an altogether general feeling that what you’re carrying is way too big.

You can definitely have a better and more portable tablet experience from plenty of other devices, even from Toshiba. 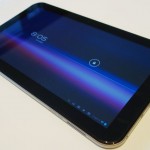 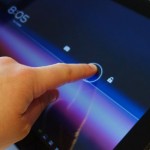 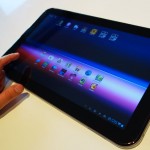 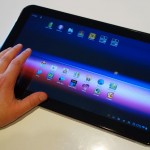 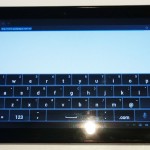 With a 13 inch tablet, the on-screen keyboard is very big. 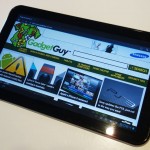 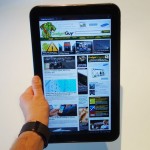 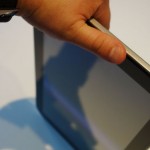 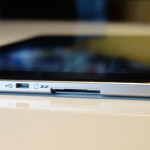 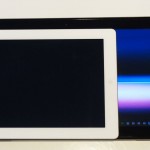 Think the iPad is big? This thing is even bigger. 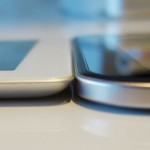 Sure, Toshiba’s AT330 (right) is big, but it’s not very thin, especially when thrown up against the iPad 2 (left). 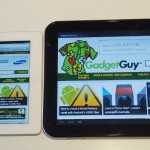 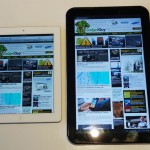 How a webpage looks on an iPad (left) compared to the AT330 (right) when both are held vertically. 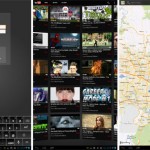 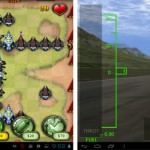 Aviate Android launcher leaves invite only, now available to all

Mac and Windows come to Android with Parallels

After the review: how updates can kill a great product