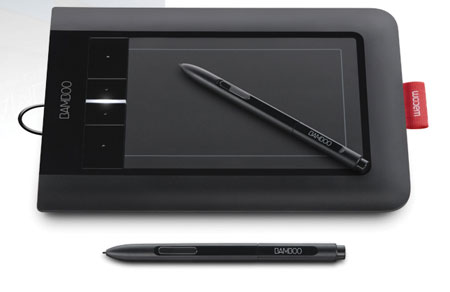 Love the idea of using a graphics tablet for your creative computer work, but worried you won’t harness the full capabilities – and thus justify the expense – of an industry grade unit? Consider the Bamboo line.

These small- and medium-sized tablets combine a traditional pressure-sensitive sensor with a touch sensor similar to a notebook computer’s touchpad, making for a hugely flexible input device for your computer.

And to keep your creative juices flowing, Wacom bundles three of its four tablets with software for everything from photo manipulation to digital painting.

The idea is to create a tablet at a realistic price for home use, but still running professional-grade hardware.

Wacom’s new Bamboo line consists of a number of tablets at the small and medium sizes. The name lets you know the capabilities: anything called Bamboo Pen has pen control only, while the Pen & Touch units, like the model under review here, include fingertip control too.

So this unit includes both sensors, plus four buttons which can be customised for different uses, depending on the software you currently have running. Its 15 x 9.2cm active area means it’s part of Wacom’s ‘small’ range, with the larger Bamboo Fun offering 22.2 x 13.6 cm active area, or more than double the surface area.

The pen has 1024 levels of pressure sensitivity (Wacom’s professional tablet, the Intuos4, has 2048) and the pen can be flipped and used as an eraser! There are also two buttons on the pen that can be used like mouse buttons or re-assigned to other tasks as you prefer.

A single USB cord provides both a computer connection and power, and the tablet can be configured for left- or right-handers.

Like the Macbook’s touchpad, the Bamboo supports various multi-touch commands, such as single finger tap to select, two-finger tap for right-click, two-finger drag for scrolling (horizontally and vertically), flicks for forward and back control, and pinching movements for zooming in and out.

Speaking of which, the Bamboo Pen & Touch comes with Adobe Photoshop Elements 7 and Ink Squared Deluxe. The latter is an annotation package that allows you to scrawl on your screen, which can either be extremely useful or just plain fun!

Like all self-powered USB devices, setup of the Bamboo is simplicity itself. As always, drivers and configuration software should be installed before connecting the tablet, then it’s plug and play! Or in this case, draw, write, rotate, zoom and create.

There are a number of configuration tweaks, including the handedness of the tablet, how the buttons function in different applications, and the sensitivity of the pen control.

Since this is a small tablet, it can be set to provide more sensitive or more relative control – either have the cursor move based on how far you move the pen, or scale the movement to the size of your display.

For a tablet at this price, performance is pretty much faultless, and the ability to lift the pen and make multi-touch tablet gestures with your other hand is just excellent.

You can rotate or zoom the canvas in PhotoShop using two fingers, or manipulate a Google Earth view in a similar way. Pinch to zoom in on a photo, use the pen to adjust a few pixels or fix some red-eye, then double-tap with your finger to jump back to 100 percent view. You can flick forward and backwards through web pages, scroll quickly through long documents, annotate spreadsheets and school projects with the Pen, then quickly check off grocery items from your favourite online supermarket and pop them into your shopping basket. Your mouse and keyboard just might end up clogged with dust!

A note here: it’s tempting to pair the Bamboo with a netbook computer, as the small tablet complements these diminutive machines very well. Sadly though, the average netbook doesn’t quite have the grunt to run the more sophisticated creativity applications. You’ll still be able to use your Bamboo as a touchpad, but expect a little lag if you move the pen very fast.

Because of its compact size, the Bamboo Pen & Touch is easy to add into any computer space, from full desktop systems with 24 inch displays, right down to space-saving notebooks (not netbooks though – see above).

The four programmable buttons are handy, and the pen has all the features of a professional unit, but at a fraction of the price.

Very serious artists might appreciate the extra pressure sensitivity from the Wacom Intuos4, but at this price the Bamboo Pen & Touch is hard to beat.