Review:
WD My Passport Wireless SSD goes where no storage has gone before (Australian review) 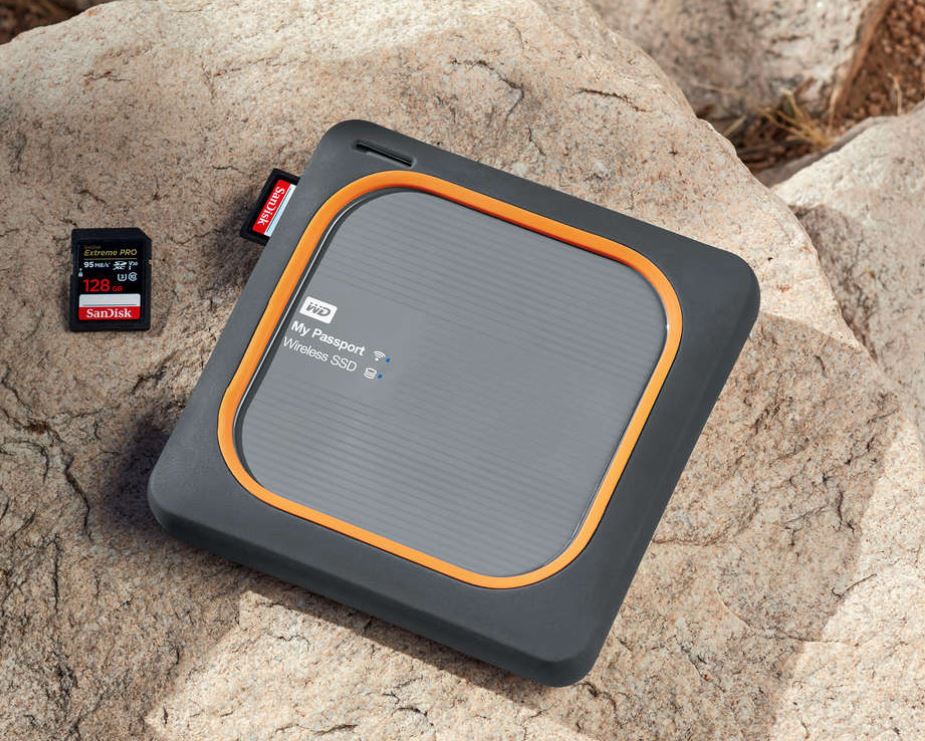 WD My Passport Wireless SSD goes where no storage has gone before (Australian review)
4.0Overall Score

The WD My Passport Wireless SSD is designed to go anywhere. The shockproof SSD is inside a rugged polycarbonate shell wrapped in rubber bumper. Its inbuilt power bank ensures backup and storage is always on-tap.

GadgetGuy covered the launch, and it gives a good overview. It is pretty clear that this device was what road warriors really wanted.

It works with Windows 7 (format as NTFS) and macOS 10.7 (format as exFAT) or later. It can also be formatted to FAT32 and HSF+. You can NTFS on macOS with a Paragon driver.

OK, at 135mm square x 26mm x 460g it is larger than I expected for an external SSD. That is until you think about it.

In there is a 6,700mAh battery (that can be used as a power bank as well). It also has enough computing power and smarts to act as an intelligent quasi-network/cloud storage device. Oh, and as a DLNA/Plex media server as well.

Other than that, it looks rugged. While the SSD can withstand almost any reasonable drop the device as a whole is capable of withstanding a 1-meter drop. It will operate in 0-35°C temperature.

You can use the (too short) 30cm USB-A 3.0 to micro-B cable from a PC via Windows Explorer (or Mac equivalent). That gives the best up/down data transfer speed. You can also use the WD My Cloud Desktop app or access it via the IP address in a browser.

Or via Wi-Fi joining its SSID (either as a hot spot or in Access Point mode for internet access).

The USB-A 3.0 port and SD card reader are for data transfer to the device only.

The review model has a 2TB SanDisk SATA/600 SSD interface. Internally this SSD is capable of very fast read/write transfer speeds, e.g. copying or moving files around on the device.

As to be expected that interface quickly chokes with you hit it with random read/write of larger files 500MB or 1GB files.

We tested a SanDisk 64GB extreme 90Mb/s SD card in the device (the reader supports 65Mbps), but Crystal Disk mark was unable to access it as it did not show up as a separate drive letter. Both SD and USB ports are for data transfer to the My Passport SSD only. It can auto-delete data on these once copied.

It has Wi-Fi AC 1×1 in both 2,.4GHz and 5GHz bands. What 1 x 1 refers to the number of receive and transmit streams (antenna) meaning its maximum theoretical duplex speed is 150Mb/s in total.

To use it you connect to the device’s SSID (either band), and it can bridge to your router for internet access. It will support up to eight concurrent connections.

Direct to the router the Samsung achieved 93/39Mb/s with a 15ms ping. Via the My Passport SSD, it achieved 47/27.5Mb/s and a 15ms ping. We confirmed this by connecting a Microsoft Surface Pro 2017 to the device and got the same results.

This is within expectations using as 1 x 1 device as an access point. While it can support up to eight devices, these share the total; bandwidth. You could probably have two 4K streams or more HD streams.

The Desktop App for Windows, macOS

You can access the WD My Passport Wireless SSD via a desktop browser and its default IP address 192.168.60.1.  The device’s home page allows set up of users, Wi-Fi, firmware updates and more.

Once you enable network sharing, you can use Both Windows and Internet Explorer (or Mac equivalents) to drag and drop files.

There is also a default DLNA server, or a Twonky Media server to access photos, videos and music. You can also install Plex Media Server (WD My Cloud Edition) to act as a full media server.

You can also set up an automatic backup from the PC to the device.

The iOS and Android smartphone app enable manual or automatic upload of all media.

File Transfer Protocol (FTP) enables the transfer of content to and from your Public folder through FTP. The drive supports default Anonymous login and takes advantage of Wi-Fi security.

The main thing is that it provides one-touch backup of SD or USB Flash drives which will be significantly faster than over Wi-Fi.

Battery life is a function of Wi-Fi speed. You can optimise it by selecting Battery Life over Performance in the app.

At maximum battery life, it should last 10 hours. We used it on Wi-Fi AC 5GHz and streamed an FHD video loop. It achieved just on seven hours.

Charging time from 0-100% is about five hours with the supplied charger. If you use a 1A port (like on a modern PC or dock), it should run the device without battery loss. Charging will be twice as long.

While it can act as a power bank, remember that a smartphone usually has at least a 3,000mAh battery leaving a similar amount to power the drive.

The 66-page manual is here.

There is a teardown here.

GadgetGuy’s take. Rugged, tonnes of storage. WD My Passport SSD does what it says.

This is the device that professional photographers, videographers, creatives and road warriors have been waiting for ever since the hard disk version came in late 2014. It can do away with a computer and achieve similar things via a smartphone.

Add to that Wi-Fi AC (as a hot-spot access point as well), and it can become part of your workflow. I can also see this as a good travelling companion housing all your music and videos. Even the kids can log in and listen or view them.