The first attempt by Woolworths to push into the growing coffee pod market, the Caffitaly takes a European machine and brings it into supermarkets for an inexpensive price, hitting below the $100 price tag that so few manufacturers have tried to reach.

Imported from Europe, the Woolworths coffee capsule machine is actually made by Caffita as the S14, designed in Italy for the Caffitaly system of coffee pods, which is available in Australia from both Woolworths, Gloria Jean’s, and under the MAP brand of pods from Officeworks, Target, and Harvey Norman, among others.

The boxes include 16 pods and retail for between five and eight dollars, and are mostly based on coffee blends, but can also include types of tea and hot chocolate.

The black Caffitaly S14 is a reasonably bulky machine, almost as big as a real coffee machine and the pricey Nespresso Maestria.

Caffitaly’s S14 machine is built with a 15 bar pump, the same rated amount of pressure on offer from the Nescafe Dolce Gusto machines, but under the 19 bar pump the Nespresso machines are rated for.

The S14 weighs roughly four kilograms and features a water tank capable of holding 1.2 litres of water, as well as a spend capsule compartment which should hold roughly 10 capsules. You will have to empty it from time to time, as spent capsules still have coffee grounds in them and will grow mould.

At the back of the unit, there is also a small hatch to allow you to refill the water tank in case you don’t want to pull it out.

There are three buttons on this coffee machine for three sizes of coffee, and there is a lone plug coming out of the appliance for powering it.

A milk frother is also available, though it does not come with the Caffitaly S14 and can be purchased as an accessory.

In the past year or two since we started taking a good hard look at coffee machines, we have become familiar with a variety of the appliances, trying various systems, all of which cost over $150.

So when a $99 machine comes along, you have to wonder if it can really take on the competition.

Aesthetics are a matter of taste for everyone, but if there’s one thing we can say about the S14, it’s that it is no small machine, nor is it one that had the backing of a big design firm behind it: it’s big, black, and reasonably bulky.

Larger than both the Nespresso U and Nescafe Gusto, it comes close to matching the $799 Maestria in size, although it omits much of the style, going instead for a very generic appliance look in black, accented with a chrome handle and cup tray.

Despite this rather generic look, it is reasonably sturdy, even thought it has been built out of plastic, and won’t fall over if you lean on it or push slightly, so that’s a positive thing.

Like all other pod machines, the use of the machine is simple: fill up the removable water tank at the back, switch the machine on, pull back the pod door lever, drop a pod in, place your glass or mug under the spout at the front of the machine, close the level and lock the pod in place, and then hit what size coffee you’d like to make.

Alternatively, you can program the buttons to release the amount you want most, by holding the button down while the coffee is dispensing, so you can make the button for double shots release a little more, if you don’t really care much about doubles.

Rather than adopt the Nespresso clone mentality taken by the machines produced by both K-Mart and Kogan, the Woolworths machine uses the Caffitaly system, which is shared in this country by Map, leaving you more beverage selections than just the Woolies home brand and Gloria Jean’s options, and even opens purchase options up to stores including Officeworks.

For this review, we purchased a Woolworths Medium Roast rated in the middle for strength and a Gloria Jean’s “Smooth Classic Blend” that airs closer to being a light taste than a heavy and bold coffee.

Running it through on both the double espresso and long black settings, we found both blends to be reasonably bitter. The crema looks nice, but elicits an almost burnt smell, rather than the welcome aroma of good beans.

The coffee on offer is better than filtered coffee, but not up to the quality that either the Nespresso or Nescafe Dolce Gusto machines put out, and we certainly didn’t think we were receiving cafe quality espressos from this machine, compared to the premium coffee we’ve experienced from other capsule-based machines.

For the $99 price, we’re not totally surprised, and after opening a capsule and seeing how it worked, we’re more inclined to say that from a design point of view, the Caffitaly competes more directly with the Nescafe system than the one from Nespresso, since the coffee “brewing” takes place in the pod in both systems with a series of small plastic filters.

That said, you will be able to find hot chocolate and tea-based capsules for the Caffitaly in the Map pods available at other retailers, something Nespresso machines just can’t do.

You may find that every so often the spout spits or drips in a large bubble, which is a little off-putting, but tends to go away quite quickly.

We’ve actually never seen this before, so when it happens, try to ignore it.

Caffitaly’s claim of “automatic ejection” for the pods isn’t quite spot on, either. It’s more of an ejection method based on “waiting for a bit, then nudging the machine, and then tilting it like you would a pinball machine so that the pods fall into the spent container.”

We certainly wouldn’t call that automatic, and while it’s not difficult, it’s something to be aware of, so don’t be alarmed when they’re stuck in your pod bay door.

At just under a hundred dollars (or $79 if you happen to be one of the Woolworths card holders), it’s a hard price to argue with, especially against the $229 and $299 machines we normally receive from Nespresso and Nescafe.

Certainly, this is an area few major appliance makers will touch: it’s cheap and attempts to lock you into a system, and since so many of us drink coffee, it could make an easy gift for someone with a love for the stuff and isn’t too picky about quality. 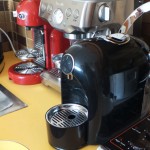 The black Caffitaly S14 is a reasonably bulky machine, almost as big as a real coffee machine and the pricey Nespresso Maestria. 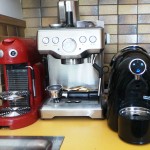 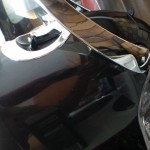 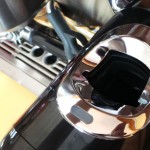 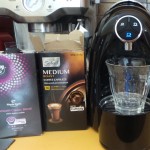 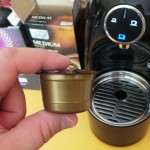 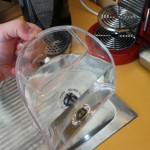 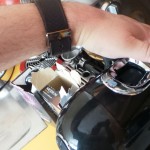 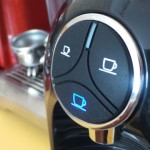 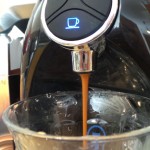 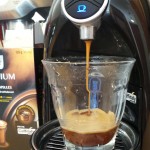 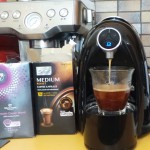 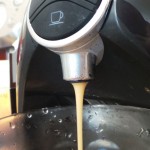 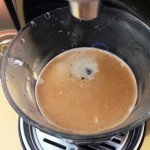