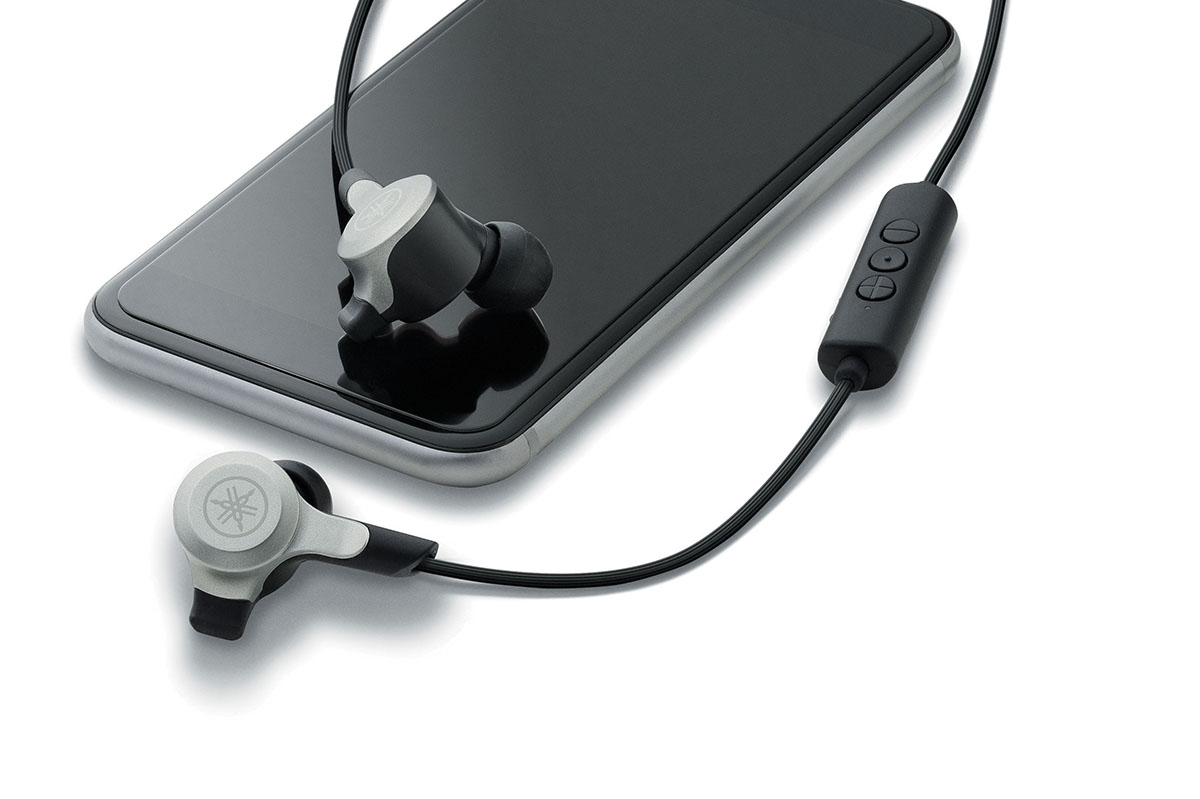 The Yamaha EPH-W53 Bluetooth earphones may be a lot smaller than Yamaha’s latest Bluetooth headphones, but like them it packs advanced codec support for higher than standard sound quality.

The Yamaha EPH-W53 Bluetooth earphones adopt the conventional arrangement for such things. A short length of cable connects the two earbuds – 520mm in this case. There’s a control and charging pod near the right hand earpiece. This has three buttons for volume and other control.

One of the things that makes these earphones special is the support for the AAC codec – for higher quality sound from iPhones and iPads – and aptX for (some) Android devices. See here for which phones support aptX.

Yamaha says that the earphones use 6.4mm drivers but doesn’t mention the power rating. The batteries are in the earbuds themselves. Of course they use silicon tips.

Five sizes of them! The middle size were pre-fitted. They worked, but felt a little loose so I switched over to the largest size. Because silicon tips are so soft, you can generally go perhaps one size of the one that would also work.

A lot of earbuds come with fins or wings, which are soft, usually pointy, protrusions that you can tuck into the whorls of your outer ears, increasing the security of the fit. These units instead have stubby rectangular protrusions that perform a similar function. Yamaha calls them “ear stabilizers” Three sizes are provided, with the middle size already fitted out of the box.

They looked as though they’d be quite ineffective. But they did a fine job. They turned out to be quite comfortable when used properly. It was just a matter of popping in the earbuds, and then rotating so that the nub sits under the tragus of the ear. (That’s the bump on the front of the ear that kind of reaches out over the ear canal. It’s Ancient Greek for goat. Who knew? I didn’t until I looked it up.) I didn’t realise quite how securely they were holding until I pulled them out, and had to apply rather more force than usual, and they came out with a pop. If such things matter to you, they are rather more subtle than most wing arrangements.

As I often say in these reviews, you really must have a tight seal with your earbuds to get good bass. Yamaha, it turns out, agrees. It actually says so in the manual: “If the eartips are not securely positioned in your ears, you may not hear the bass range clearly. To enjoy optimum sound quality, adjust the eartips so they will fit your ears perfectly.” Sound advice indeed.

That was in the manual I downloaded from the Yamaha website. The “Quick Manual” in the box is the usual slip of paper covered with arcane pictograms. The downloaded PDF manual is a dozen clearly written and illustrated pages. Download it here.

The battery takes a couple of hours to fill. The earphones are good for around seven hours of playback. My experience was broadly consistent with Yamaha’s claims, but it will all depend on such things as how loud you play them.

I have strong opinions as to what constitutes good sound from earphones and headphones, and with earphones in particular I’ve found many models, often from quite reputable brands, to be disappointing. Unnatural, usually, especially with excessive treble making them harsh. Sometimes I wonder whether perhaps my taste is idiosyncratic rather than accurate.

I had high, but tentative, hopes for the EPH-W53 earphones. A few years ago one model of wired Yamaha earbuds were my favourites. At the time there were three models available, and the most expensive ones were the ones that were excessively bright and uncomfortable, while the cheapest models ( although still close to a hundred dollars, from memory) were the most natural in sound.

These earphones turned out to deliver sound that conformed to Yamaha’s catchphrase: Natural Sound.

Very natural, very tuneful, very easy on the ear. In addition to making for a pleasing listening experience, it was reassuring to me that perhaps my earphone taste is in fact accurate rather than idiosyncratic.

The bass produced by these earphones was full and extended, but more natural in level than that in, say, the Bose SoundSport Free earphones which lean towards a stronger bass. The treble is balanced and detailed, but doesn’t contain the slightest hint of harshness. Right now as I’m writing this I’m listening to the Rickie Lee Jones album It’s Like This, carried in Direct Stream Digital format, playing from an iPhone 8. In the pauses in the music, the slightest amount of tape hiss (or white noise perhaps from a mixing board – this being a recording made in the digital age) is discernible. The kick drum and percussion on “Low Spark of High Heeled Boys” has real impact, while the cymbals are detailed, fully present, but at an appropriate distance in the mix. Their fading rings sit in the mix fully coherent, even as more powerful elements swirl around them.

Last night I listened to Switched On Bach by Wendy Carlos. The tape hiss in that was more prominent (hey, it was the sixties), but the impact and extension of the bass was impressive. That music was in FLAC format and fed from my network server by an app on a Google Pixel 2 XL in aptX format. Who says that compromises must be had in sound quality with Bluetooth earphones?

I’ve just started revisiting John Coltrane’s challenging 1965 album A Love Supreme on both vinyl and digital. Obviously earbuds are not suitable for the former, but the dynamic delivery on the latter (again, from the server via the Pixel 2 XL) produced a sense of intimacy and a feeling that everything on the recording was available to be heard. Yet even though intimate, there was a little less of that “in your head” feeling that is often produced by earphones. Instead the music had a feel of being out there, around me.

Moving to something a little less elevated, I played the Primus’ 1993 album Pork Soda. Les Claypool’s bass was full and powerful. The air around the instruments faithfully delivered. And the volume levels available were capable of being damaging, had I dared.

Somehow the battery metre dropped from 80% to 40% overnight. Note: you can see that aptX is enabled.

As for practicalities, as I’ve indicated they made for a comfortable wear. The only limitation on that was the weight of the control pod tended to pull the earphones to the right. Also, more surprisingly, the earphones didn’t seem to switch off automatically after a certain time of no music playing. I stopped playing music one evening around 11pm with the battery at 80% (Android reports the battery level, iPhones only show a tiny icon). The next morning the earphones were still on, and the battery was at 40%. It’s easy enough to switch them off manually, if you remember.

You can pair the earphones with up to eight devices. The manual suggested that they could be connected with two devices at the same time. I figured it’d work the same way as the recently reviewed Yamaha HPH-W300 headpones, but there was no way I could get it to connect to both an iPhone 8 and Google Pixel 2 XL at the same time. It could be paired, but I’d have to break the connection manually on one to allow the headphones to work with the other.

The buttons on the control pod felt much the same as each other under my fingers, so it was a matter of counting the bumps to find the right button. I would have preferred the middle button to be more prominent. On occasion when a call came in, I’d pressed the wrong button a couple of times before slowing down and making sure I had the middle one. In addition to the usual functions – volume control, play and pause, answer, reject and hang up – by holding down the volume controls for three seconds you can skip tracks in both directions.

A double tap on the centre button invoked Siri or Google Assistant. Their voices were clear and they seemed to have no problems in hearing and understanding my commands.

The Bluetooth connection was very solid. It remained clear with the iPhone 8 regardless of head orientation for up to a dozen metres, and with my head pointed the right way up to fifty metres.

The Yamaha EPH-W53 earphones deliver truly excellent sound, they are practical, they are comfortable, and best of all they all moderately priced at just under $150. Very impressive indeed.