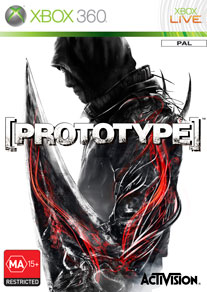 Releasing hard on the heels of rival title inFAMOUS, Protoype is also an action adventure game starring a man who has suddenly acquired an ability to collect and channel not electricity, but a viral infection, to all intents and purposes making it a superhero game. The similarities are immediately obvious as soon as this entertaining game gets started, with your character, Alex, instantly also able to move quickly and fluidly around in the urban environment, like a cross between Spider-Man – Alex almost flies, but not quite – and the Hulk. But unlike its competitor, Protoype heaps on the rewards quickly and constantly, showering the player with a wealth of points that can be used to upgrade Alex’s abilities in terms of movement, defensive and offensive ability and his use of weapons and vehicles.

To some extent, especially earlier on in the game, this means that you’ll probably focus on your favourite ‘superpower’ and choose to improve it as much as possible, getting the maximum possible running speed or jump distances, for instance, to make getting around the city easier, but the fast upgrades soon renders those choices redundant, because with Prototype you can afford them all! In this case, that’s a good thing, because the game really throws the book at you.

Much, much more aggressive and faster paced than inFamous, the action in Prototype is violent, gory and relentless which feeds well into the embarrassment of riches that is your weapons arsenal but, scratching the surface a little, proves to be the result of quite lazy level design, with shameless, credibility-breaking spawning action rife during almost every mission once you get past the halfway stage.

This is a little disappointing because Protoype succeeds more than nearly every superhero game we’ve played in making the player feel like an all-conquering god. The powers Alex finds himself endowed with are fun and extremely satisfying to use, able to bound or glide around the city, rip air con units from rooftops and hurl them at helicopters, launch flying melee assaults, pound pavements to send enemy units flying, smash tanks with your bare (hammer)fists and all manner of other bloody, nightmarish attacks against the bad guys.

To top it all, instead of finding conveniently-placed health packs around the joint, Alex eats people. That’s right, ‘guilty’ or innocent alike, our man will simply grab a tasty-looking morsel of human that happens to be passing by and consume them. It’s ugly, it’s shocking and it’s a lot of fun to watch!

Combined with an entertaining further ability to ‘shapeshift’ and assume the identity of the last poor innocent you consumed, the range of powers in Prototype makes for a great first few hours. Sadly, once you’re well under way, the weak storyline, repetition inherent in the missions and combat issues start to wear you down and there is little motivation to soldier on. Bizarrely, the most enjoyable moments are usually when you’re ‘off mission’, exploring the city and laying waste at random for the fun of it. And when you’re doing that, you feel like a god.