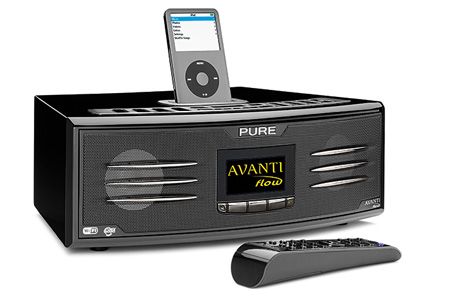 The biggest problem with the Pure Avanti Flow as a DAB+ receiver is that it does so much more than just receive digital radio. It sits there at your bedside – or even on your AV cabinet, given the quality of its audio – as if saying “why bother with a handful of terrestrial broadcasts when I can give you thousands of internet radio channels in a fairly intuitive interface?”

Like most DAB+ receivers on the market, the Avanti Flow takes the form-factor of a traditional clock radio, with a big snooze button in the middle of the control panel. But this is no mere clock radio.

First up, audio quality. A pair of 7.5 cm drivers pump audio at 20 watts, while the 13cm sub adds another 35 watts to the system. This results in punchy, dynamic sound. The odd piece-of-pie shaped form factor angles the stereo speakers away from each other, helping the Avanti Flow fill the room more convincingly – though at the end of the day its soundstage can’t compete with properly placed stereo speakers. But it’s loud and beefy, and more than you’d expect from a tabletop system.

Functionality is where the Avanti Flow excels, however. Along with an iPod dock (no iPhone support, though), there’s FM radio and a USB input located a little awkwardly on the rear of the unit. Pure eschews an optical drive in favour of a sophisticated internet radio system called ‘The Lounge’ (thelounge.com).

Sign up using your PC, tell them you radio’s serial number, and thousands of channels are yours to scroll and search through… almost endlessly. This is all via your home Wi-Fi (there’s no Ethernet port unfortunately) and, once you’ve made all the necessary wireless introductions, the Avanti Flow will also stream music stored from your PC.

Somewhere in the middle of all this there’s room for a DAB+ receiver, though current channels sound pretty weedy compared to internet radio’s higher bitrates. The six-line display gives lots of info about said bitrates, signal strengths and other things of interest to DAB+ nerds, however.

This is an impressive unit, though the odd shape makes it awkward to install in a bookcase. But when that’s the only real negative we can come up with, it should be clear: this is a new radio benchmark.

Sorry, did we say radio? We mean Tabletop Digital Music System. And this is one device that actually lives up to that grand moniker.