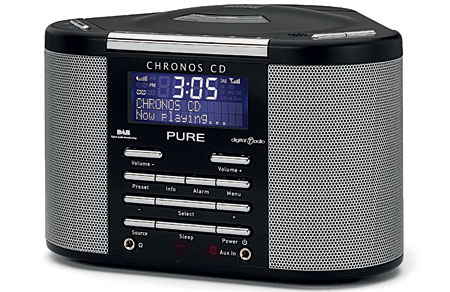 Pure’s Chronos iDock is an unusual combination of clock radio, DAB+ tuner and iPod dock. It’s a device that suffers from a number of little design faults, like a screen with a limited viewing angle (a no-no for a clock radio), an unresponsive credit-card remote and buttons that require too much pressure to press, meaning you often have to hold the radio in place with your other hand to prevent it from sliding away when you press them. Unfortunately, these little faults add up, and the list of annoyances on the iDock makes it hard to recommend.

It was also a little hard to test. It doesn’t have an extendable antenna for DAB+ radio, and it had trouble picking up the test stations broadcasting during our review period. It was only by holding the wire aerial at a specific angle that we could get any DAB reception at all. It picked up FM radio just fine, however.

The iDock has dual speakers, as befits an iPod dock. The sound from the oval drivers came across as a little flat in our testing, but did provide a surprising stereo effect in spite of their closeness. The dock itself comes with a half dozen adaptors for different models of iPod, and there’s also an aux-in port if you have an MP3 player that’s not an iPod.

The setup of the Chronos iDock is simple and logical, although there is a sameness to the buttons that makes controlling the radio with bleary morning eyes challenging. The prominent LCD screen, meanwhile, looks good from the front, but from an oblique angle it’s nearly impossible to read the time or see the information on the display. It does have a few nice touches to it, including large characters and the capacity to manually scroll through the RDS or DAB+ radiotext (which is great when you’re looking for the ‘currently playing’ information and don’t want to wait until its next rotation).

It comes with a very advanced alarm setup, with four presets, the capacity to set the alarm for weekdays or weekends and the ability to set sleep times and to choose your wakeup noise from any source on the radio – including an attached iPod.