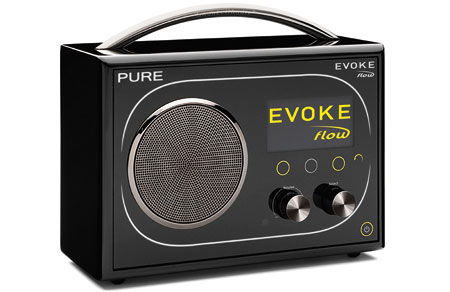 With its retro-styling and simple two-knobs, five-buttons interface, you could be forgiven for thinking that the Evoke Flow was one of the least advanced digital radios on offer. In many ways the opposite is true. The Flow has hidden depths that are at least as compelling – if not more so – than its core DAB+ tuning function.

With a single embedded 7.5 cm speaker, the Flow is styled after an old-fashioned kitchen radio, though its touch-sensitive buttons, piano finish and yellow-on-black OLED screen give it a modern twist.

It tunes DAB+ radio as well as FM radio, supporting 30 presets on the former and ten on the latter. Perhaps its most compelling feature is its Wi-Fi networking support, which allows you to access music stored on a home PC as well as listen to internet radio stations. The former requires you to set up UPnP media server on the PC – you can use Windows Media Player on Windows, or download Flow Server from thelounge.com, Pure’s internet radio portal site. We found setting up Wi-Fi easy, if a little slow (especially ‘typing’ in the password).

You don’t have to register at thelounge.com to use this service, but we’d recommend that you do so, since there are roughly 9,000 radio stations to choose from, as well as 2,600-odd podcasts and ambient noise channels. Browsing through them on your Flow can be fun, but it’s far easier to use thelounge.com to select your favourite channels. Thelounge.com will then upload them to your radio and they will appear in the Flow’s favourites list.

The least compelling element of the Flow is the speaker. With the single driver, the Flow’s audio output is not going to impress anybody. It’s barely a tick above clock radio quality. But connecting headphones or external speakers (Pure’s cost $99) to the device delivers very clear audio performance, if a little limited in terms of it maximum volume output without amplification.

We’re also big fans of the simple interface of the Flow, and were particularly pleased at how fast it is: fast to change channels and modes, fast to tune and search for new channels. Even its internet radio performance was top notch, delivering both high quality audio and fast buffering on the dozen channels we tried.

All this makes the Evoke Flow a very compelling buy indeed. It goes well beyond simple DAB+ radio tuning – it’s a networked media player and internet radio tuner as well. You will never get bored with your radio again.