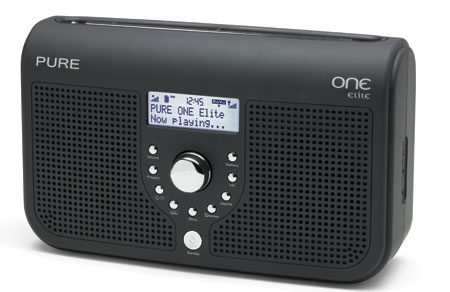 Another member of Pure’s extensive line of retro-styled digital radios, the One Elite is a two-speaker FM and DAB+ radio. It lacks the funky networking features of the Evoke Flow and has a control interface that can at times be counterintuitive, but does have a few very neat features, including a time-shifting capacity called ReVu that allows you to pause and skip through live broadcasts, much like a PVR does for TV.

The One Elite has twin 7.5 cm speakers to pump audio out, but lacks the capacity to connect to an external speaker set. While the speakers deliver decent audio for their size, they don’t really do justice to the clarity of digital radio, and their close proximity limits the stereo effect. When we connected headphones to the Elite, however, the radio delivered clean audio to the headset, rivalling the best of the other digital radios reviewed here.

The Elite is controlled through a combination of ten buttons and a dial, with most buttons changing the function of the central dial. This context-based control of the radio requires a little getting used to, and can be rather painful for some functions, and at times we found ourselves wrestling with the system, especially in respect to the ReVu function.

ReVu, which functions only in DAB+ mode (not FM), allows you to pause or rewind for up to 15 minutes. The first press of the ReVu button pauses the audio, a subsequent press restarts the playback, and the dial then allows you to fast forward and rewind through the buffered audio. It takes some practice to work the fast forward and rewind effectively, but once you get the hang of it, it’s very cool, and can be used for ad-zapping if you’re prepared to let the live audio get a little ahead of you.

In addition to ReVu, it has several other nifty features. It sports an alarm clock and kitchen timer, up to 25 channel presets and the capacity to pause the scrolling text that gets broadcast with DAB stations, to better catch web addresses and phone numbers. The text pausing is pretty much a necessity, since the Elite One only allows displays a single line of text at any one time on its rather limited LCD screen.

The Elite One is powered by mains or from batteries, and Pure claims it will get 70 hours of life from six alkaline C types, which makes it a fair travelling companion or camp radio.