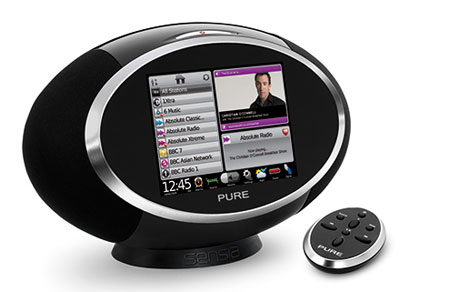 NOTE: This review of the Pure Sensia DAB+ digital radio has been published prior to the device having full functionality. The review will be updated once that has been achieved.

One of the key features of DAB+ digital radio is the ability to broadcast text information along with the audio stream. But squinting to read this on a dinky little three-line display can be less than ideal. And with 39 digital channels currently on air in the Sydney region alone, scrolling through them all with traditional controls isn’t much fun either.

So why not give a DAB+ radio the kind of interface it deserves? A good-sized, capacitive touchscreen, which displays text with room to spare and allows you to scroll quickly through stations? Why not indeed – here’s Pure’s offering with just that feature – the Sensia.

As a straight DAB+ unit, the Sensia is most similar to Pure’s Evoke Flow digital radio. Fairly compact, exchanging super high-end audio quality for a small footprint and portability.

Like the Evoke Flow, the Sensia also has a Wi-Fi adaptor inside, so it hooks on to your internet connection and plays music from either your PC, or Pure’s own The Lounge internet radio service.

The big difference here of course is the 14.5cm (3.7 inch) touchscreen. It’s capacitive, like the iPhone, and it supports flicking and dragging gestures to scroll quickly through long lists of internet (or indeed DAB+) stations.

Also unlike the Evoke Flow, the Sensia has two speakers, but lacks an auxiliary output, though there is a headphone port.

Part of the promise of this unit is access to such things as Picasa and Facebook via custom apps for the Sensia, but even though our test unit was fresh from the factory and not an engineering sample, there were no apps available for download during the review period.

Many touchscreens on devices like this or on home PCs often use ‘resistive’ technology, which is less response. This capacitive screen responds very well – almost, but not quite, up to the iPhone’s industry benchmark.

Individual icons are quite small though, and jabbing at a device that sits on the kitchen counter is surprisingly more awkward than doing it to a phone you hold in your hand. Practice should see your miss-points diminish though.

Audio quality is fairly average, since the small drivers are working across the whole frequency spectrum. A serious auxiliary output – ideally RCA – would have been very welcome here. But the same applies to all Pure’s products.

As mentioned, we couldn’t try out any apps, as none were available at time of review. For us, the Sensia had exactly the same functionality as the Evoke Flow, though with the excellent display making selecting stations much easier.

Oddly, the Sensia doesn’t play video. Pure promises photo slideshow functionality via Picasa once the app is released, and you can also browse content from your networked PC or iPhone. Though for iPhone connectivity, you need to buy an optional dock – even though the unit has a USB port, it’s specifically not the kind that an iPhone’s stock cable plugs into.

This is a great-looking unit with some very promising functionality. But we’re left with the sneaking sensation that audio quality has been sacrificed for the sake of the touchscreen. Don’t get us wrong: touch control is great. But DAB+ – in these expensive early-adopter days – is all about audio quality.

Once this unit does more than its touch-deprived siblings, it will become more compelling. For now though, we’ll save up for a Pure Avanti Flow. That’s a very serious DAB+ radio.