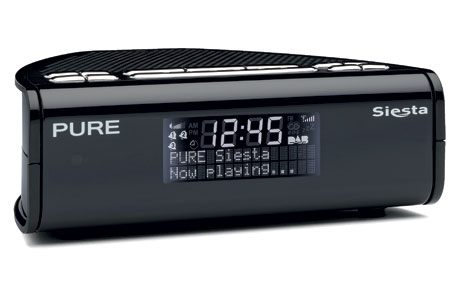 The Pure Siesta digital radio is a product that looks very much like the traditional clock radio, with a single upward-firing driver, large buttons designed for half-awake morning users and a simple design that’s light on the frills but easy to use and control.

It uses a similar screen to the Chronos iDock, and it shares the same problems. The screen looks great from the front, clean and bright, with readily readable text and time information. View it from an angle, however (as you might as you peer bleary-eyed from your bed in the morning) and it’s almost unreadable.

It uses a wire aerial for tuning, which can result in weak DAB+ reception, depending on where you are. With a little fiddling we managed to get it to tune DAB+ radio during the testing period, and the speaker produced the kind of audio you’d expect from a small clock radio.

The audio was clear, but devoid of depth or timbre. When we connected headphones to the Siesta, however, that changed, and we listened to clear, rich stereo DAB+ audio.

The Siesta supports three alarm presets, plus advanced options for each, including the capacity to choose what days the alarm goes off and its volume. It’s fast and simple to set up.

Energy-conscious buyers should also be pleased with the Siesta’s power consumption. DAB+ isn’t exactly an energy-efficient technology, but according to Pure the Siesta uses only about 2 watts when active, and less than 1 watt in standby, which is very impressive indeed.

In all, it’s a fair clock radio, but as we’re seeing a lot with these early DAB+ radios, the price is rather steep for what’s on offer. At around $200 RRP, you’re paying a lot for the privilege of being able to tune digital radio as well as FM, and a clock radio speaker can’t really do justice to the additional clarity offered by DAB+.