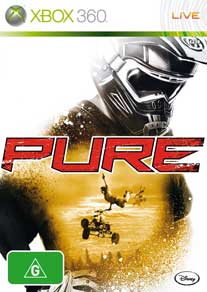 Pure is an odd name for this game, given the probable audience, because it describes the experience rather than the content of the game itself. An arcade-style racing game based around ATVs – All Terrain Vehicles – there’s no doubt that the quad racing bikes are authentic enough to please the real-life ATV-racer crowd, but how many of them are there out there, really? Instead, the arcade thrills are going to appeal to more casual gamers who just like to have fun, and they may walk right by this game on the shelves because they don’t realise what’s on offer.

What is on offer is, going back to that naming issue, a very ‘pure’ gaming experience. Rather than try to be all things to all people, the very talented development team behind Pure – the same team responsible for the near-perfect motorcycle racing game MotoGP series on Xbox, albeit with a new name and new paymasters, in the form of Disney Interactive have focused on producing a fun racing experience and nothing but a fun racing experience. And it’s a resounding success.

In spite of a quite fiddly trick system, and a bizarre decision to force tactical thinking during races by having the ability to do cool tricks stolen away from you if you use too much boost, Pure is absolutely brilliant fun. The level design is great, resulting in a whole heap of circuits in exotic and interesting locations around the world – it’s not how I remember Lake Garda, but what the hey! – that are laid out purely to provide players with exciting routes, tricky turns and jumps and the ability to get massive, and we mean really MASSIVE air, as you hurtle off a ledge and find yourself sharing airspace with birds and helicopters as you begin a looooong and rapid descent back towards firma terra.

It’s during these long falls earthwards that you get to play with the entertaining tricks, observing your rider pulling off the most extraordinary and funny stunts imaginable – and the word ‘observing’ is very apt here. Because the sheer pace, the roller-coaster tracks, the complicated trick system and the other riders vying for position all guarantee that you’ll become tunnel-visioned playing this game, focused intently on your rider, and resulting in an experience that’s probably actually as much fun to watch someone else play as it is to play yourself!

So Pure is a visual treat, it’s incredibly fast and fun and if you’re into your ATVs in a big way, it’s chock full of options to upgrade and switch out parts that we’re reliably informed are impressively authentic. There’s a quite challenging world tour mode but the piece de resistance for us, so far, has been the online play which – interstate within Australia as we’ve been playing it at least – is frantic and entirely lag-free. Pure brilliance.

This game was reviewed on an Xbox 360 – the game is also available for the PlayStation 3.