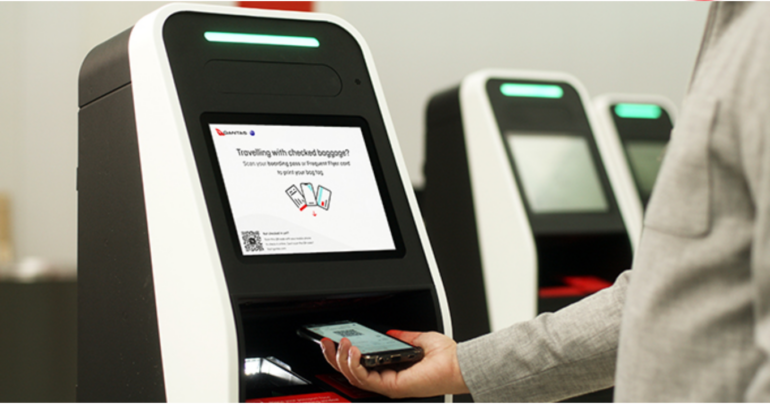 Qantas has revealed how we will soon be checking in to our domestic flights without relying on paper-based boarding passes. Thanks to its next generation kiosks, the aim is to reduce the process of collecting your bag tags and checking your flight details to around 20 seconds, or 4 times faster than with previous kiosks.

After customer testing and tuning, Qantas has moved to a public trial of the new kiosks at Terminal 3 in Sydney Airport. These are expected to be fully installed by early June, with 240 kiosks at all major domestic airports by September.

The new check-in process takes into account that more than three quarters of Qantas customers check-in online and use digital boarding passes via their smartphones. As such, the new kiosks will be used primarily for bag tag printing and purchasing additional luggage.

Customers who are stowing luggage can simply scan the QR code from their digital boarding pass via the app on their phones, and the kiosk will quickly print out a baggage tag. Otherwise, those with only carry-ons can simply go to their gates using their digital boarding passes. If customers haven’t checked-in online prior, they can also do this by scanning a QR code on the kiosk.

Qantas says that its customer service agents will still be available for helping people check in if they don’t have a smartphone, are part of a large group booking or have oversized baggage.

Another benefit of moving to digital boarding passes is that it reduces paper waste. Qantas says that before COVID, almost 25 million paper boarding passes were printed annually, and has committed to phase out their use as part of its sustainability targets.

For more on how the new kiosks will work, check out Qantas’s video below: