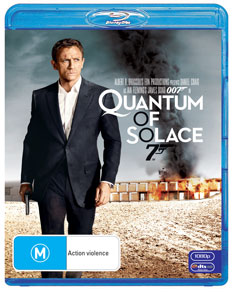 The latest Bond movie, victim of a lacklustre critical reception but breaking all sorts of box office records – including biggest Bond opening ever, smashing Brosnan’s Die Another Day – in fact sees Craig bring a convincingly grim portrayal of life as an MI6 spy to the screen. Quantum of Solace, now out on Blu-ray, tells the story of Bond out for revenge, following on directly from Craig’s Casino Royale as he morosely tracks down his lover’s killers inside the ‘Quantum’ criminal organisation.

The main component of the bonus content is a ‘making of’ featurette and various ‘blogs’ from the movie’s production crew. But the rest of the menu is eerily similar to Fox’s other big release this month, Australia, almost as if the studio has a template set up somewhere. Probably the best of these are the music video from Alicia Keyes and the White Stripes’ Jack White (but that’s on the DVD version too, so not exclusive to Blu-ray) and the odd couple’s later appearance in the ‘Music’ blog.