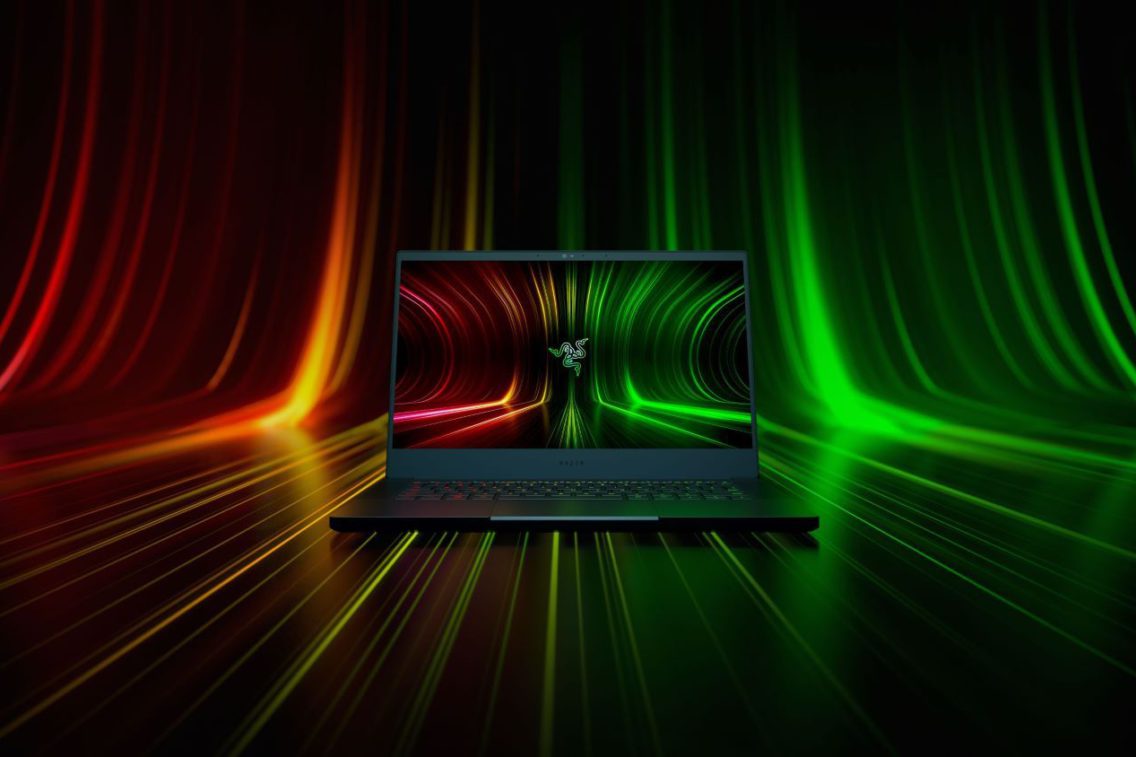 Razer’s Blade family of gaming laptops has long been the go to choice for hardcore gamers looking for elegant powerhouses. The company’s latest entry, the Blade 14, might be their most exciting entry yet. Billed as the smallest 14-inch gaming laptop, the Blade 14 mashes the fastest mobile CPU together with the most powerful GPU into an impressively sleek and svelte form factor. The good news is that the Blade 14 delivers on the promise with very few compromises, but, at a starting price of $3,099, you’ll need deep pockets to acquire one. So is it worth the investment?

Slipping into work or play

The Razer Blade line is often described as the ‘MacBook’ of gaming laptops, and the same rings true for the Blade 14. It comes with a smooth anodised aluminium finish, a premium design and thoughtful touches. We particularly liked how the palm rest’s magnetic sensor gives that rock solid thump when closed.

In fact, the Blade 14 is only a hair thicker than popular ultraportables like the 13-inch MacBook Air and Dell XPS 13, while packing the fastest GPU and CPU you can find in a laptop today. It’s an incredible feat of engineering.

There’s no signs of flex in the base or top cover, and when it comes to overall fit and finish, it’s a difficult machine to fault. As with the other Blade laptops, the glass trackpad is best in class, offering a level of responsiveness and accuracy not normally found on other gaming machines.

Its understated design and top knotch build quality means the Blade 14 wouldn’t look out of place in a boardroom meeting or inside the studio of a creative professional.

With that said, Razer has been largely rocking the same design for years now without addressing some of the quirks that have built up along the way. The black finish, for example, still absorbs all the oils from your palms making it a fingerprint magnet, and while the RGB-lit keyboard is industry leading when it comes to customisation, the key travel is on the shallow side and lacks the tactility found in other competing notebooks.

It also would’ve been nice to have at least a few different colour options such as the Mercury White colourway on offer with its larger sibling, the Blade 15.

This means that the Blade 14 will deliver for videographers and photographers who require colour accuracy for their workflows, while also giving some added pop when gaming.

However, there’s no support for High Dynamic Range (HDR), which is a shame when you consider the increasing number of premium laptops on the market that have this. It’s worth noting that Razer does offer a wider range of display options with its bigger brother the Blade 15, including an OLED screen with HDR and touchscreen support.

At around 330 nits, it’s not the brightest panel going around but the matte screen does a great job at mitigating reflections when used in brighter environments.

The display runs at a super smooth 165Hz which, while excellent for gaming, also makes general web browsing and productivity feel snappier to use. The bezels are narrow but there is a large chin below the display that feels like a missed opportunity to put in a taller 16:10 screen.

A taller screen would have allowed for a smaller bottom bezel and more screen real estate, all without needing to shrink the overall footprint. If you’re coming across from a 3:2 or 16:10 display, going back to a more cramped 16:9 panel will take some getting used to.

The Blade 14 sports a healthy smattering of ports for a notebook of this size. There are two USB-A ports and two USB-C ports, with the later supporting power delivery for charging and DisplayPort 1.4 for connecting to an external monitor. All four USB ports are rated at 3.1 Gen2 for speeds of up to 10Gbps.

Thunderbolt support is absent, which shouldn’t come as a surprise since the Blade 14 uses an AMD rather than an Intel processor. This also means that there’s no way to upgrade the graphics performance down the line with high powered accessories like an eGPU (external GPU).

The Blade 14 is one of the few notebooks on the market to have a HDMI 2.1 port, so you can connect to a compatible 4K monitor at 144Hz without any compression or having to use chroma subsampling. A Kensington lock, headphone jack and Razer’s proprietary charging port round out the package.

Sadly, the full size SD card from the Blade 15 didn’t make it over to the 14, which is likely to disappoint videographers and photographers.

There’s a Windows Hello IR camera above the screen. This is a nice touch considering it isn’t something you would normally find on a gaming notebook.

On the wireless side, the Blade 14 features Wi-Fi 6E and Bluetooth 5.2 for the latest wireless connectivity.

The Blade 14 packs the fastest mobile processor and discrete graphics on the market with a 8 core 16 thread AMD Ryzen 9 5900HX CPU and Nvidia RTX 3080. For context, the 5900HX is more powerful than the CPU inside the larger Blade 15.

Our concern going into the review was that performance would be significantly throttled due to the limited thermal headroom, but Razer has managed the issue by using a new custom-built vapour chamber cooling solution as well as capping the RTX 3080 to 100 watts. After pushing the Blade 14 hard with benchmarks and the latest demanding titles, we are happy to report that the GPU temperatures never exceeded 80 degrees, while the CPU ran a little hotter at 90 degrees.

Impressively, the outside of the chassis never got too hot and it was comfortable enough to use on the lap. Meanwhile, fan noise at its loudest measured around 51 decibels which is very impressive when you consider how much heat needs to be pushed out of such a small chassis. The fans were largely inaudible with general day-to-day productivity.

While we would still recommend using headphones if you plan on pushing it hard, you won’t have to worry about annoying others around you with fan noise when you’re at a coffee shop.  You also have the option of adjusting the performance profile and fan speeds to your liking via Razer’s Synapse software.

Cranking the GPU and CPU performance profile to their maximum, I first fired up Deathloop. Running the game on the highest graphical preset with ray tracing enabled and the resolution set to panel’s native resolution of 2560×1440, the Blade 14 averaged 70fps (frames per second). Enabling DLSS (Deep Learning Super Sampling) in quality mode, boosted the frame rate to 100fps.

Switching over to Far Cry 6, with the game set to the highest graphical preset as well as DXR shadows and reflections enabled and resolution scaling set to the default 1.0, I was averaging 55fps. Turning on AMD’s version of DLS – FidelityFX – boosted the average frame rate to 60fps.

However, with AMD’s supersampling technology being noticeably inferior to Nvidia’s DLSS, we preferred dropping down the resolution to 1080p and disabling FidelityFX, which yielded better image quality and performance.

Finally, running what is arguably the most demanding PC title – Cyberpunk 2077 – at ultra settings with ray tracing also set to ultra and DLSS set to the default auto, the Blade 14 achieved an average of 45fps.

In short, the Blade 14 lives up to Razer’s claims as being the most powerful 14″ gaming laptop.

It’s not going to outperform similarly equipped larger models such as the Asus ROG Strix Scar 15 and the Lenovo Legion 5 Pro where there’s much more thermal headroom and the GPU can run at the full 130 watts. However, it packs enough performance to hang with the larger and much less portable crowd.

It’s worth noting that while the Blade 14 can be configured with either the RTX 3060, 3070 or 3080, they are all capped at 100 watts of power. This means that the performance differential particularly between the 3070 and 3080 models will be very minor and certainly not worth the $1,000 premium that Razer is charging. As such, we would recommend going with the RTX 3070 model.

The Blade 14 comes with 16GB of RAM but it is soldered onto the motherboard so it can’t be upgraded. While 16GB is more than enough for gaming, it may be an issue for content creators.

Battery life better than most

Razer claims a whopping 12 hours of battery life, which is unheard of for a gaming laptop with a beefy RTX 3080 inside. In real world day-to-day use with non-gaming related tasks such as emails, video calls and web browsing, it averaged closer to 7.5 hours. This is still impressive even for a non-gaming laptop, so the Blade 14 has the stamina for double duty work and play.

Meanwhile, gaming on the Blade 14 ran down the battery in just under 2 hours which, to be fair, is fairly standard for most gaming laptops. Of course, most gamers like to be connected to a power outlet for the best possible performance so this isn’t much of an issue.

On that note, the Blade 14 charges incredibly fast using Razer’s own 230-watt power cable. In our testing, the laptop went from dead flat to full charge in just 1.15 hours, making it closer to smartphone charging speeds than a gaming laptop.

A laptop that strikes the balance between portability and performance has long been the holy grail for gamers, and the Blade 14 delivers it in spades. Sure, there are cheaper gaming laptops that are just as powerful but none can match the premium fit and finish or extremely small size of the Blade 14.

That said, the lack of a taller 16:10 display, HDR, upgradeable RAM and SD Card slot means that creative professionals looking for a portable workstation will be better served with its larger sibling, the Blade 15 Advanced.